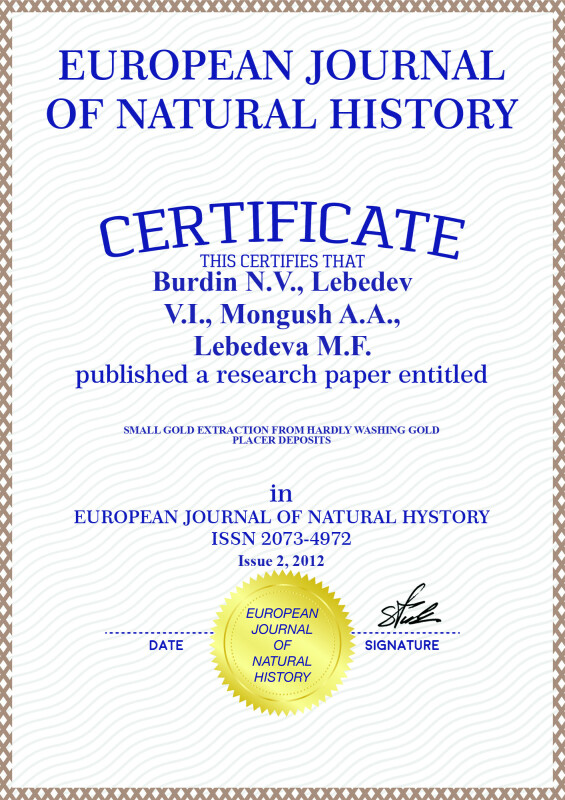 Maximum possibility of extraction of small and especially small gold is one of the basic problems at effective working off as ore as gold placer deposit. The preparation of a pulp for enrichment process, i.e. its intensive disintegration is the basic technological feature of hardly washing gold-bearing mineral raw materials. The screen vibrator-sluice which includes formation of a stream of a pulp by influence on mountain weight on a screen of water stream from the hydromonitor, which was directed against movement of the mountain weight, was brought into the scheme of a chain of concentrating complex devices. Influence on a pulp stream on a sluice by the screen movement, giving of rotation to a pulp in rug cells by the untwisting of a sluice round an axis of a perpendicular plane. Creation of a restored catching covering in the form of cells of a sluice rug with compulsorily untwisting streams of a pulp, deduction of heavy allocated parts by inertial forces from screen movement. The device for method of realization contains the hydromonitor the stream of which is directed against movement of mountain weight on a screen. It has additional washing away atomizers strengthened in walls of the bottom screen. The sluice supplied with a drive of circular movement in the plane and established with possibility of fulfillment of circular movements in the plane and with possibility of fulfillment of screen movement that´s why this is rigidly fixed under a two-level screen. A suspension bracket which is looking like four cables or chains, suspended in a horizontal plane and providing an inclination of a sluice and screen [1].

The necessity of increase in time of passage of gold for a technological cycle, inclusion of every possible control operations etc. inevitably develops with the reduction of coarse gold. The mechanical wash pan sluice was worked up with the purpose of increase kinetics of technological process inevitably grows as much as possible to take valuable heavy components in rather quiet weighed environment. It concerns to devices for allocation in a concentrate of thin heavy parts with creation of weighed heavy environment [2]. The way includes preparation of the initial material containing a considerable quantity of clay in the course of classification and liquescency on a sieve by screen movement and water atomizers, pulp transportation on a platform consisting of the cascade of enrichment chambers. The working surface of each enrichment chamber consists of flat surfaces of the Siberian tray, conical surfaces of the Korean tray, an internal surface of the cylinder fixed on the flat bottom and with the second cylinder fixed on the bottom with concentric external surface and with splitter. The platform is exposed to circular movement. The pulp is exposed to the influence of centrifugal forces for pressing of thin fraction to conic spreading surfaces during the hit in deepening washing trays. The undivided material influence the water stream brought tangentially in a cylindrical part of a tray for untwisting of heavy fraction. During the carrying out of a technological mode, the initial material in the form of a pulp arrives on a sieve built in the top part of an inclined platform and executing screen function, than it is washed away from atomizers by water delivery from a highway for giving of transport water and pendent washing atomizers of a pipe of a descending water irrigation. The inclined platform has a suspension bracket in the form of four cables fixed on the welded basis for a suspension bracket of an inclined platform of a wash pan sluice. The suspension bracket provides a necessary inclination of a flat platform. The inclined platform has a box-shaped design of a wall which is chippers and a supporting element for all knots. The working surface of a platform is executed in the form of the compound combined trays carrying out a role of chambers of enrichment and established on cross-section channels of an inclined platform. The inclined platform is supplied by the inertial drive fixed on the bottom of a platform. The drive is executed in a kind of misbalance the shaft of which is resulted in rotation from a pulley of transfer by a friction. The enrichment chamber, in the form of the compound combined tray, consists of four flat surfaces forming deepening between a long surface, a short flat surface and two lateral surfaces. The conic surface leaning against an internal cylindrical surface in which concentrically located the external cylindrical surface is interfaced to flat surfaces forming a tray. Conic and cylindrical surfaces have the general vertical axis of rotation and the flat bottom. In a benthonic part of a cylindrical part of a tray the branch pipe of a supply of the untwisting water, located tangentionally between an internal cylindrical surface and an external cylindrical surface is brought above, on a course of movement of an initial material. The branch pipe for concentrate dump is established vertically in the bottom and located before a branch pipe for giving untwisting waters. The branch pipe for concentrate dump has a branch pipe of a supply of water for creation of the ascending stream, located above and on a course. The concentrate arrives through a hose into the capacity for the concentrate gathering, having a branch pipe. The amplitude and frequency of fluctuations is regulated by selection of misbalance and by number of turns of the electric motor. The drive also can be executed in a kind of the eccentric mechanism established motionlessly on the basis of a suspension bracket of a platform. The concentrate received on such way dump through a branch pipe in the bottom of a tray with the ascending stream brought to it. Concentrates from a screen vibra-sluice and mechanical wash pan sluice lead upon heavy concentrating equipment, in the scheme of a chain of devices by which the methods and devices for wet division of small materials on density in weighed concerning quiet environment are included [3].

The extraction of small gold and other valuable heavy metals and minerals effectively enough carried out in the developed installations, mechanical trays of the Siberian type. It became clear that the possibility of maintenance of heavy fraction in a suspension at quiet movement of a pulp, regulating amplitude and frequency of fluctuations in a horizontal plane, and also creations concerning quiet ascending streams that promotes normal carrying out of an adjustable technological mode. The honing mechanical tray was used at processing of grey and blacksands in honing operations.

The work is submitted to the International Scientific Conference «Bionomics and rationalised natural management», Maldive Islands, February, 15-22, 2012, came to the editorial office оn 16.02.2012.