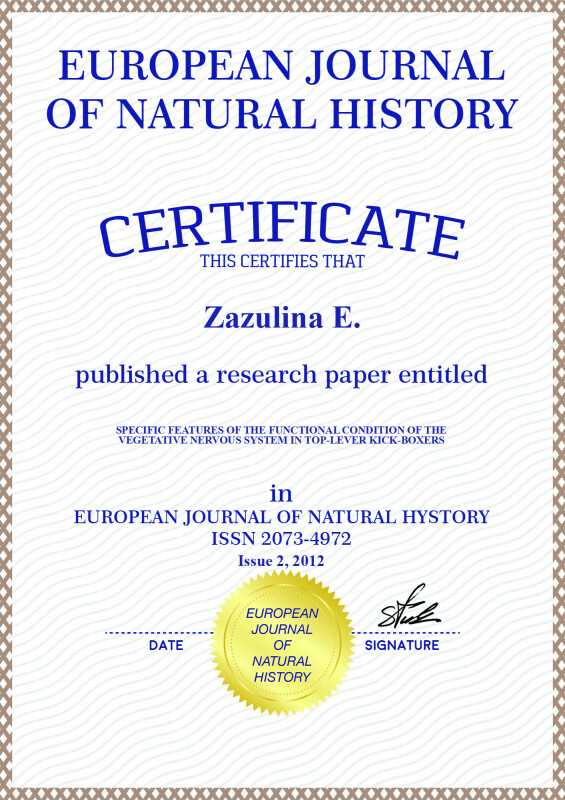 In recent years there have been received convincing results contributing to the fact that high training and competitive loads while practicing kick-boxing influence on the functional condition of athletes´ vegetative nervous system (VNS) in connection with the fact that VNS participates in adaptive mechanisms of the regulation of physiological processes. However, the analysis of the scientific literature shows that not so many papers are devoted to the problem of the kick-boxing influence on the VNS indices. At the same time the violation of the functional condition is based on many pathological changes; moreover the deviation of vegetative reaction parameters often leaves behind the clinic-laboratory picture of a disease.

The aim of the research is to define specific features of the VNS functional condition in kick-boxers in a precompetitive period of their training session. The investigation was held at the medicinal health-related centre of the State-Budget Educational University of Higher Professional Education (SBEU HPE) «South-Russian State University of Economics and Service». 33 17-21 aged kick-boxers took part in the investigation. Their sports level is a Master of Sport and a Master of Sport of International level (N. Rusanov, senior coach of Kick-boxing Federation of Russia in full-contact section). While estimating VNS functional condition the following indices were used: Kerdo index, active one-minute orthostatic test and a variational range of RR intervals. As a result of investigations it was established that Kerdo´s index meaning in kick-boxers. Testifies to it´s a bit higher tone in parasympathetic VNS part (-11,57 ± 2,14).

The results of an active one-minute orthostatic test revealed the picture proving its satisfactory endurance (12,87 ± 3,17).

The dynamics of the index of the variational range of RR intervals testifies to some predominance of the tone of the VNS parasympathetic part (RR - 0,29 ± 0.03).

The information received allow to take into account the degree of the tension of central mechanisms of kick-boxers regulation in the process of their adaptation to some changing environmental influences.

The work is submitted to the International Scientific Conference «Priority directions of development of a science, technologies and technics», Italy (Rome-Florence), April, 10-17, 2012, came to the editorial office оn 22.03.2012.