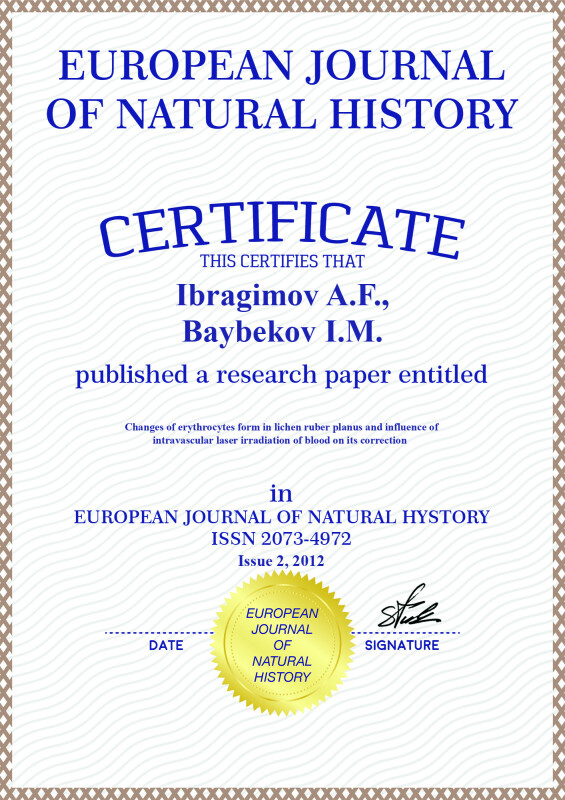 Article in PDF
3482 KB
It is shown by methods of transmission, scanning electron microscopies as well as by light microscopy, thick drop and morphometry, that marked shifts in proportion of discocytes – normal RBC and stomato-, echinocytes – pathological forms takes place in peripheral blood of patients with lichen ruber planus. At that, the share of echinocytes is significantly higher. It was revealed, that the changes occur more in the blood obtained from lichen ruber planus plaque than in the blood from finger. Intravascular irradiation of blood leads to normalization of proportion of discocytes and pathological RBC as in peripheral blood, as well as in blood obtained from plaques.

Patients with lichen ruber planus (LRP) comprise from 0,5 to 2,4 % of all dermatological patients. This dermatosis often occurs on the background of various somatic diseases, which not only restricts the use of many conventional treatments, including photochemotherapy, but also often causes their inefficiency [4, 8, 13-18].

This necessitates search and studies of new treatment methods.

Low-intensity laser irradiation (LILI) being one of the most effective non-drug means that influence on pathological processes, has been successfully used in the treatment of various dermatoses for several decades. The marked effect of LILI was also noted in the treatment of LRP [1, 3, 9-12].

One of the conventional methods of laser therapy is intravascular laser irradiation of blood - ILIB. It is widely used in dermatologic practice [3, 9-12].

The development and implementation of specially designed for ILIB devices, such as «Matrix-VLOK» (Russia) made ILIB procedure not only more efficient but also easier and safer [3].

An important factor in the effectiveness of ILIB is its direct effect on red blood cells (RBC).

However, the forms of RBC in patients with LRP and in the complex treatment of this dermatosis with ILIB were not carried out.

In the work we studied the relation of discocytes - RBC of normal biconcave form to their pathological forms - echinocytes, stomatocytes, RBC with crest and other forms, in the peripheral blood taken from finger and from skin lesions (papules) of patients with LRP, before and after comprehensive treatment of this pathology with the use of ILIB.

Capillary blood taken from finger and from skin lesions of 19 patients with typical form of LRP was subjected to morphological examination before treatment, and on the day 10 of treatment. In 9 cases, the complex treatment was without the use of ILIB.

Most patients indicated on an association of illness with mental trauma. Disease duration ranged from 2 months to 1 year. We also studied blood of healthy volunteers - 8 cases.

ILIB was carried out with apparatus «Matrix - VLOK», (produced by a scientific-research center «Matrix», Russia) with radiating head KL-VLOK, equipped with a special needles and optical fibers having Teflon coating KIVL-01, the wavelength 0,63 microns, the power output of the optical fiber 1,5-2 mW, exposure time comprised 20 min.

The ILIB procedure (output power was 2 mW, wavelength, exposure 20 minutes) was conducted on a daily basis. A course consisted of 10-15 sessions.

To study the forms of red blood cells, we used scanning electron microscopy (SEM) and the express - method of «thick drop» (EMTD).

The technique of EMTD was developed in the laboratory of pathologic anatomy of RSCS named after acad. V. Vakhidov, Republic of Uzbekistan. It is patented in the patent offices of the Republic of Uzbekistan «Method of determining the shape of RBC» № МКИ 6 and 61 B 10/00, as well as the software - «Express diagnosis of RBC forms» № ED-5-05.

To do this, the pad of ring finger or human psoriatic plaques punctured with scarificator and 2-3 drops of received blood are placed in 2 ml fixating 2,5 % solution of glutaraldehyde prepared on phosphate buffer (pH 7,4). A drop of fixed unstained blood then placed on a slide and covered with a coverslip. The proposed technique, allows saving the natural state of erythrocyte to a certain extent and having them approximately same with those in the vascular lumen. This, in turn, facilitates more adequate assessment of the erythrocytes´ functional morphology. This method is applicable as for qualitative study of erythrocyte forms, as well as for morphometric study of ratios of normal and pathological forms.

It should also be emphasized, that using this method, the objective morphometric evaluation of RBC deformability can be obtained within 10-15 minutes with a simple light microscopy. This makes it possible, to monitor the structural and functional status of erythrocytes and other blood cells to assess the severity of a pathological process and the adequacy of the treatment.

Previously conducted comparative studies of the erythrocytes counting in peripheral blood specimens with SEM and EMTD, have shown reliability of the last [1].

Morphometric counting of normal and pathological forms of erythrocytes ratios were carried out, using at least 1000 erythrocytes in each case with the subsequent statistical analysis. Results are given as mean ± SEM the significance of differences between mean was evaluated by Student t test for unpaired data and by two - way analysis of variance (ANOVA) followed by Duncan´s multiple range test.

Peripheral blood erythrocytes in psoriasis were studied with the aid of SEM and EMTD after medical treatment without ILIB application and with ILIB application. Blood was also taken from practically healthy volunteers - aged 20-30 years (total 8). Blood sampling was conducted in October - November and March - April in order to minimize the influences of too hot and too cold temperatures.

The RBC of peripheral blood obtained from a finger or from human psoriatic plaques for scanning electron microscopy, were fixed in 2,5 % solution of Glutaraldehyde in phosphate buffer (pH-7,4). After dehydration in solutions of alcohol - acetone of ascending concentration, the samples were dried by transition through the critical point of nitrous oxide in the apparatus «НСР-2» (Hitachi) and then coated with gold in the apparatus - IB-2.

Samples then were mounted on aluminum mounts with electroconductive glue. After being gold ion sputtered in the apparatus «IB-3» (Eiko, Japan), samples than were studied and photographed in SEM «Hitachi S-405A» with Canon digital camera from the monitor screen of the microscope.

Clinically, cutaneous manifestations are represented by polygonal papules of bluish-red color, with smooth, shiny surface and umbilicate indentation in the center. The surface of most elements had a clearly expressed Wickem´s grid (Fig. 1). The rash in 5 patients was generalized and occupied more than the half of the skin´s surface. In the remaining patients, eruptions were limited in character and localized on the flexor surfaces of the extremities.

Fig. 1 b. Patient B, Lihen Ruber after 7 days of treatments

A slight leukocytosis, lymphocytosis (35 %), eosinophilia (10 %), accelerated ESR (25 mm/h) was noted at laboratory studies. Patients with hypertrophic form of disease and having lesions of buccal mucosa were noted to have diabetes mellitus. There were no deviations in biochemical tests of blood found.

Patients administered intravascular irradiation of blood (ILIB) in the complex treatment reported good tolerability of ILIB, and there were no side effects noted. Patients reported some drowsiness after the procedure. It should be noted that, 3-5 sessions discontinued the progression of the process, reduced itching, rash started to diminish after 4-5 sessions. By the end of the treatment, papules disappeared with leaving brownish spots on the place (Fig. 1, 2).

Both SEM and EMTD revealed the dominance of pathological forms of RBC in the blood obtained from papules (Fig. 3, 4, 7, 8, Table).

Morphometric studies have shown that, patients with LRP have a more than twofold reduction in the number discocytes accompanied by fivefold increase of echinocytes in blood obtained from the plaques. Pathologic and irreversible forms of red blood cells are also revealed to be increased. In the blood taken from finger, these changes are expressed to a lesser extent (Table).

Fig. 3. The dominance of erythrocytes with numerous processes (echinocytes) in the blood from plaque. Lichen ruber planus SEM 2000

Fig. 5. Reduction in the proportion of pathological forms of erythrocytes. Blood from the plaque after a course of ILIB. SEM 2000

Fig. 6. Reduction in the proportion of pathological forms of of erythrocytes. Blood from finger after a course of ILIB.SEM 2000

Complex treatment without ILIB, lead to an increase of discocytes, which was more marked in the blood taken from finger (Fig. 8, 9, Table).

Use of ILIB in the combined treatment of LRP lead to marked increase in the number of discocytes. Number of echinocytes reduced to that in control group. Significant reduce was also seen in the number of stomatocytes, erythrocytes with crest and irreversible forms of erythrocytes (see Table).

10-15 sessions of ILIB lead to almost complete normalization of the ratio discocytes-echinocytes. Although the number of stomatocytes and erythrocytes with comb remained high, as compared with control, it was still much smaller than that of patients before treatment (Table, Fig. 10).

It is known that, normally, discocytes - biconcave shaped RBC dominate in the peripheral blood [1, 7]. At the same time, as a normal finding we may see altered forms of red blood cells - stomatocytes, echinocytes, red blood cells with crests and other pathological forms of erythrocytes which are all reversible, that is, able to return to normal after cessation of influence of adverse factors. However, red blood cells may also take irreversible forms.

The studies of changes in the shape of RBC caused by endogenous and exogenous factors, as well as those that take place in dermatovenereological practice were usually performed by means of scanning electron microscopy - SEM [1, 2, 6]. In evaluation of shape of RBC, SEM is considered to be the most objective method. However, this method is quite laborious, expensive and requires quite a long time to get the results. The conducted comparative studies have shown that EMTD is not inferior to SEM by its informativeness and objectivity, but requires significantly less expenditures, both as funds as well as time [1].

Our studies allow us to estimate the EMTD as an objective way to assess the status of erythrocytes in peripheral blood and the criterion of effectiveness of the treatment.