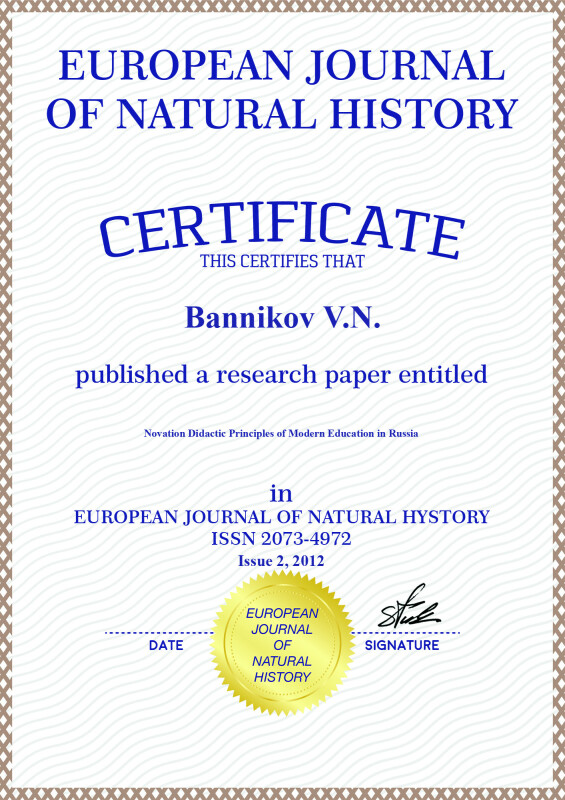 The process of education is traditionally created in the sphere of actual development taking into account operable processed linkage and quality of a final result. Model of modern education is directed to global both a process and technologies of education where means and forms are determined with meta-object of new knowledge.

Didactic principles that our soviet pedagogic was based on through long decades ( as follows demonstrativeness, consciousness and activity, availability, scientific character, individual attention to students in conditions of collective work, consistency and consecution, stability in knowledge achievement, skills and abilities, combine the theory with the practice etc.) have practically run their course, especially under the conditions of implantation of new education standards and creation of new education content.

It is important to take into account some general and partial didactic principles:

Principle of humanity - unity of generally cultural, social and moral and intellectual development of a personality adopting collective origin in civil society development.

Principle of culture succession - comprehension of deep meaning of folk artistic culture that makes fundamental principle of preservation and development of statehood.

Principle of culture congruity - unity of culture, traditions and experience of creative work under the conditions of world culture comprehension.

Principle of nature congruity - backstop on individual abilities and peculiarities of a personality developing in laws of kindness and beauty.

Principle of social partnership - equality of participants, respect of positions, consideration of perspectives and needs of participants of cooperation and interaction.

Principle of individual and creative self - actualization - phenomenon of creative translation of system of values into scientific and research, practical and art l activity.

Principal of purposeful cooperation and joint creative work - interaction in a dialogue which is focused on formation of new styles of scientific, creative and social mentality.

Principle of differentiation and integration - comprehension of process and results of activity on the basis of continuity and unity of interrelation of the general, the partial and the entire.

These principles are taken as a basis of a new conception of new education didactics in reference with new pedagogical technologies, forms and content of modern system of education.

Principles of modern didactics became scientific-practical norm and law for education system only under the conditions of new pedagogical requirements functioning which can develop specificity, the general and the partial as in the context of material and technical fitting out as in the context of formation of new structure of its content.

Given didactic principles discover clear connections of the most important meta - objective knowledge in social and professional achievement of personhood with civil responsibility for his or her life, life of the country and destiny of ancestors.

These connections are associated with a teacher as a repository of world view who remake folk, creative and scientific experience into the pupils students´ knowledge system according to the scheme:

The work is submitted to the International Scientific Conference «Science and education in modern Russia», Russia (Moscow), on November, 15-17, 2011, came to the editorial office оn 14.02.2012.