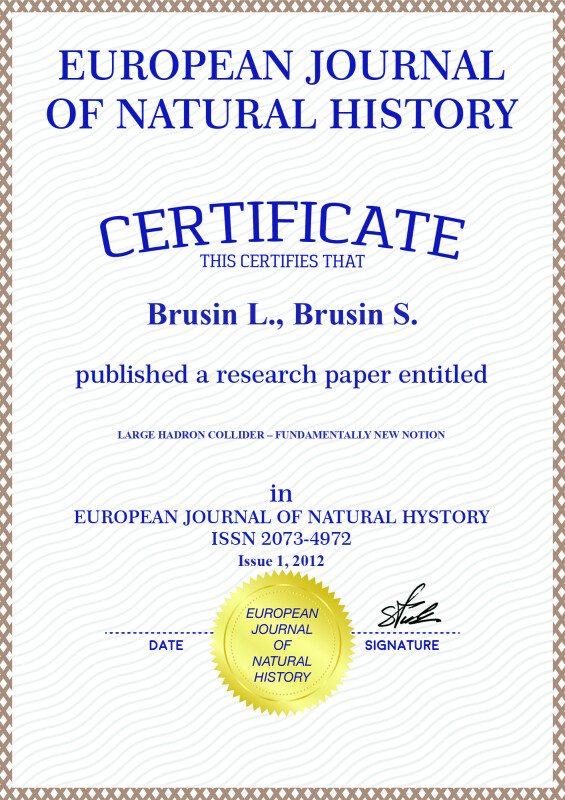 The essence of processes in the Collider is shown, on the basis of which the further experiments regarding main objectives are inexpedient.

The main objectives of the Large Hadron Collider are the following:

In accordance with the modern doctrine the basis of the Universe structure is represented by means of an elementary particle the search of which has been performed since 20th century until now. However, in [1, 2] it is shown that the whole Universe is filled by the material medium - ether which density has unusually low values (15 times less than the density of water), and in [2, 3] it is shown that the ether is a primary matter; experimentally it proves to be true by means of a pair electron-positron formation from the ether. The search of any pre-particle is pointless.

Proton movement in the collider occurs in etheric media getting between the particles of the walls´ material in the collider. At proton´s movement with a great speed it drives the ether in front of it condensing it and increasing its moving mass m in accordance with a known ratio

The proton´s moving mass m corresponds to the enclosed energy of accelerator E which will be driven up to 7∙103 gigaelectronvolt. Using the energy equivalent of the proton Ер = mрc2 = 0,94 gigaelectronvolt, it is possible to define the value of mass m in accordance with a proportion:

from Figure protons at first collide by means of their etheric masses received at dispersal. Part of these masses of ether is condensed that leads to formation of new observable particles from an ether (antihydrogen is already received); this is the experimental proof of that the ether is a primary matter. Protons reduce speed quickly, being released from other part of the ether received at dispersal. But they are not going to break and it will not be possible to reproduce the «Big Bang».

Collision of moving protons in the collider

Principle of classical mechanics for high speeds. Let´s consider the movement of an elementary particle in the etheric media. The moving particle condenses the mass of etheric media in front of it, increasing its own mass in dm value and total energy in dm∙c2 value at the expense of kinetic energy Wk. Let´s define:

and force operating on this point, will make up:

Kinetic energy in time dt should be registered as:

Having substituted the values F from (6), we receive:

Having substituted this value into (4) we receive a differential equation:

From the entry condition the following will be defined: В = m0с.

So, we receive the solution of the equation (9):

We have received a ratio (1) from the positions of classical physics which confirms increase of particle´s mass at its movement in ether.