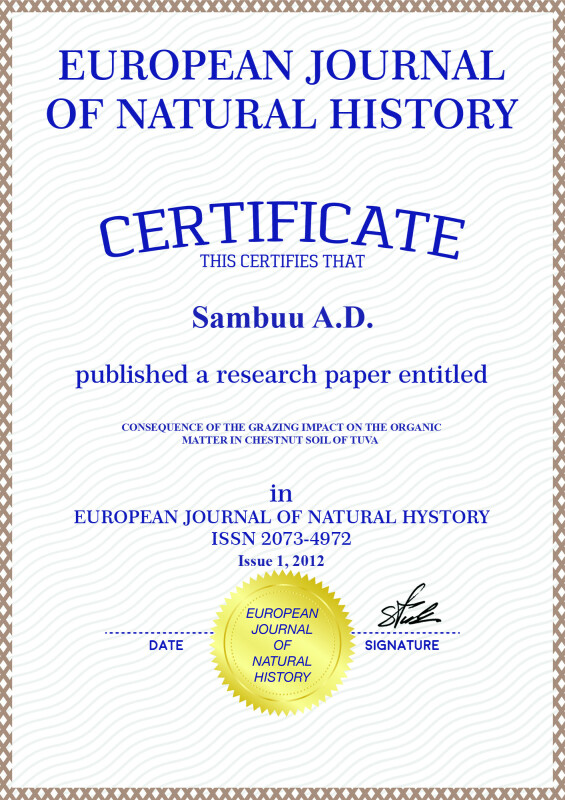 The storage of the soil organic matter have been determined by 3 principal factors: values of vegetable matter, entering to soil, the rate of the mineralization of the vegetable leavings and the mechanical structure of soil. The entrance of the carbon have been conditioned by values the net primary production.

The paper has been considered the peculiarity of the accumulation phytomass and the entering to soil the vegetable leavings on the different sites of the dry steppes.

Grazing on the steppes of Tuva by domestic animals has occurred since the first centuries A.D. and this has contributed to maintain the characteristic openness of the landscape.

In this study we were particularly interested in comparing organic matter of the dry steppes, at different intensities of human impact, with those of true steppe vegetation. True steppes are characterized by small brunch grasses. The main part of the green phytomass is made up of species which are resistant to trampling and able to regenerate rapidly after being grazed.

Study areas. The study was carried out on grasslands within Tuvinian steppes (on the Ubsunur hollow - 48-51 °N 91-99 °E) of Central Asia. The climate of this area is characterized by a rigorous cold and late spring. The yearly mean temperature is -5 °C (1975-1996). The coldest month is January with a mean temperature of -37 °C. July is the warmest month with 17 °C (Nosin, 1963). On the basis of definition of the growing season as the period over which the daily mean temperature remains above +5 °C, Ubsunur hollow has a growing season of 150 days.

The mean yearly precipitation is 250 mm (at Erzin Meteorological Station for the period
1975-1986) with a wide annual variation. The lowest and highest values for this period are 120 and 380 mm (Experiment Ubsunur, 1995). The annual precipitation is recorded from July to August.

The soil at the study sites have developed on chestnut with sand material. The humus profile is 10-20 cm deep and roots grow down to 50 cm.

Methods. Ten 0,25 m2 sample plots were laid out along a 50 m long transect at moderately grazed site and overgrazed site. 8 sample plots were chosen at random. The above-ground plant material was sorted into green phytomass and total standing dead biomass.

The soil samples were analyzed by generally used methods.

Results. We established that the above-ground and below-ground plant material (the total biomass) in moderately grazed site are 30 t/he and in overgrazed site - 17 t/he (table).

Table presents that the green biomass values of vascular plants were highest on the moderately grazed site and lowest on the overgrazed site. The amount of graminoid biomass decreased with increasing grazing intensity.

Differences of total green biomass values between the UG and OG sites were not statistically different but the value for the OG site was much lower.

Below-ground plant material consists of stem-bases and tubers? As well as roots of different length.

The average from the season entering to soil of the vegetable leavings on the moderately grazed site - 11,5 t/he and on the overgrazed - 4,5 t/he.

Discussion. Grazing has contributed to maintain the openness of the Ubsunur hollow´s landscape. The values for all components of above-ground biomass are reduced when the community is overgrazed. This agrees with the results obtained for dry steppes in Europe (Bystriskaya&Osychnivk, 1975), Kazakhstan (Titlyanova et al, 1983) and central Siberia (Afanasiev&Rotova, 1986).

Changes in the biomass structure of grasslands under different grazing intensity can be expressed as ratios.

With increasing grazing impact entering of the vegetable leavings to the soil and the storage of the humus, carbon decrease.

Conclusions. Difference between moderately grazed and overgrazed sites may arise mainly from the different factors that originate their xerophytic character: soil and climatic characteristics, respectively. Summers are very cool and the winters are hot and the soil with a low water storage capacity in the central Asia.

Moderately grazing of Tuvinian dry steppes is resulted in higher biomass values for the above- and below-ground phytomass, entering of the vegetable leavings to the soil, the storage of the humus, carbon.