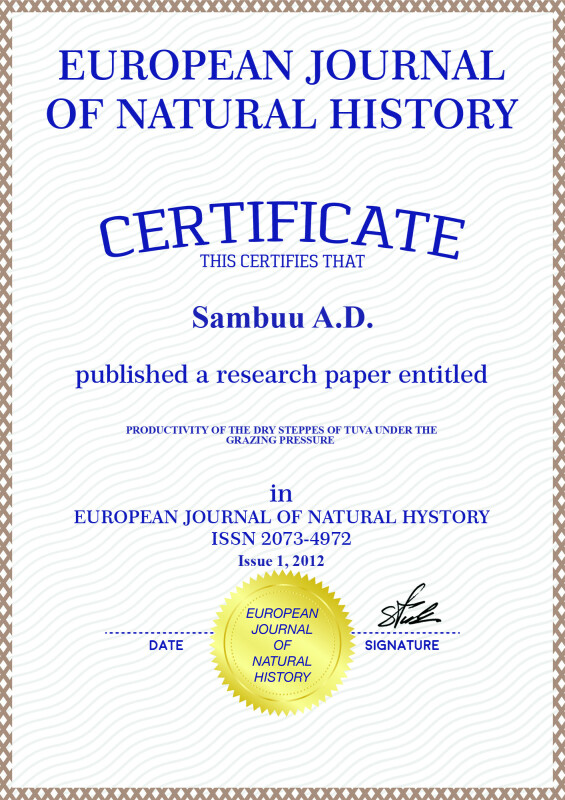 PRODUCTIVITY OF THE DRY STEPPES OF TUVA UNDER THE GRAZING PRESSURE

Grassland resources are important on a world-wide basis. Intensified grazing is one of the main causes of ecological change of meadows and steppes. Almost all steppes are grazed and represent different stages of succession. Heavy grazing impact generally initiates a retrogressive succession (degradation) including a decrease in above-ground net primary production and phytomass as well as a change in species composition, especially in dominant structure. Removal of grazing pressure leads to a progressive succession (restoration) with an increase in phytomass and production and replacement of degraded pasture community by the original plant association. Stocking rate is one of the most important factors affected a stage of pasture succession. At the same time stocking rate is a powerful management tool allowing to regulate the amount of herbage available to animals (Gorshkova, 1954; Smith, Rushton, 1994; Wei et al., 1997; Titlyanova et al., 1999).

Study areas and Methods. The study was carried out on grasslands within Tuvinian steppes (on the Ubsunur hollow - 48-51 °N 91-99 °E) of Central Asia. The climate of this area is characterized by a rigorous cold and late spring. The yearly mean temperature is -5 °C (1975-1996). The coldest month is January with a mean temperature of -370C. July is the warmest month with 17 °C (Nosin, 1963). On the basis of definition of the growing season as the period over which the daily mean temperature remains above +5 °C, Ubsunur hollow has a growing season of 150 days (Experiment Uvsu-Nur, 1995).

The soil at the study sites have developed on chestnut with sand material. The humus profile is 10-20 cm deep and roots grow down to 50 cm.

We were investigated dry steppes with different grazing impact.

Soil monoliths with a surface area of 10 cm2 were collected on each sample plot with a special steel cylinder to a depth of 10 cm2. From each monolith one-fifth was cut off to analyzes the composition of the below-ground plant material. The monoliths were washed and below-ground plant material was collected on a 0,3 mm sieve. The soil samples were analyzed by generally used methods.

For above-ground plant biomass we have:

For below-ground plant biomass we have:

The storage of the soil organic matter have been determined by 3 principal factors: values of vegetable matter, entering to soil, the rate of the mineralization of the vegetable leavings and the mechanical structure of soil. The entrance of the carbon have been conditioned by values the net primary production.

Net primary production was calculated for three years in moderately grazed steppe and for one season in overgrazed and recovering steppes (Table).

The NPP of moderately grazed steppe varies during three years from 574 to 2150 g/m2 per year in dependent on weather conditions. The growing seasons in 1996 and 1997 were normally warm and dry while summer in 1998 was very hot and dry. The NPP value in 1996 and 1997 was very high (2150-1713 g/m2) but in 1999 it decreased drastically. In this very dry season production process was not influenced by the grazing regime. Plants in overgrazed, moderately grazed and recovering for one year pastures produced modest quantity of biomass, moreover NPP is highest in overgrazed steppe. By the end of the fourth year of recovery a burst in the development of the community occurred. Shoots, rhizomes and roots of all species represented in the community had increased. An enormous flow of assimilates was going out of the above-ground into the below-ground phytomass. With a rapid root growth there was an increased death of roots and the standing crop of below-ground dead mass was high compared with dead mass of another pastures.