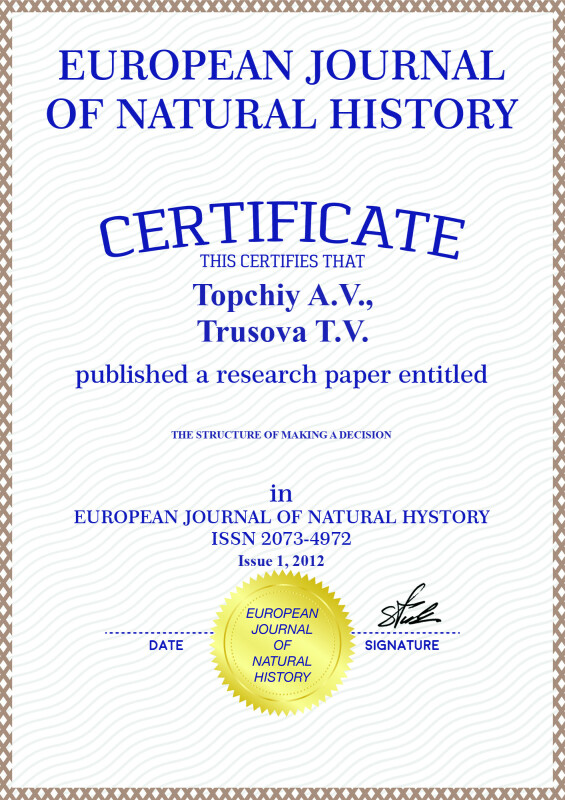 THE STRUCTURE OF MAKING A DECISION

Article in PDF
158 KB
In this article the author studies the process of making a decision, its construction, and generating the most optimal structure of this process that is convenient for its schematic construction and allows us to approach the improvement or creation of decision-making technologies in a more convenient way. The suggested structure can serve as a basis for young specialists who operate in various fields and directions while formatting or developing their own principles and technologies of decision-making.

Making a decision is one of the most important and commonly-spread processes. It plays significant role in a man´s life. Every day people have to make one or another decision, so it is one of the main components of a man´s life circle, as, however of life of any organism. It is conditioned by the nature of decision-making that is in desire to carry out an action, aimed for achieving some goal.

Technologies of making decisions began to emerge practically with the very foundation of human society. But, at the initial stage of its development their character wasn´t technological in itself. They stood more like as some experience. Through time this experience was concealed and used by certain groups of people in order to influence other members of those societies. However, concealing knowledge at earlier periods of life of the human society was a common practice. Nowadays such information cannot be hidden as effectively as earlier. Therefore technologies of making decisions are available as a multiplicity of other «management» technologies.

It is difficult to over-estimate their significance. The very fact that they improve the process of making a decision in a number of parameters speaks for itself. Thus, it becomes clear that companies that possess more developed technologies of making a decision are able to carry out this process in a significantly more effective way and, therefore, be competitive. Therefore, in modern world, and especially in modern economy a great attention is paid to problems of making decisions and improving its mechanisms.

We should also point out that in its essence it is an informational process and it includes everything that allow us to ease or completely realize the process of making a decision.

Therefore, we set an objective to comprehend the process of making decisions, understand, how it should be perceived, and what structure is the most convenient for its schematic presentation. It will allow us to improve the existing technologies of making decisions or create some absolutely new ones.

Perceiving making a decision as a single process is considered to be purposeless, especially if we have to model it. So it should be split into components that can most effectively describe the very process and serve for studying its mostly common cases.

We also shouldn´t forget that an ideal scheme and principles of making decisions cannot exist, and it is conditioned by a subjectivity of perception and information usage, including that on making a decision. Therefore, we only speak of search for a relatively optimal structure to carry out this process.

As the most famous we can study a model in which we know incoming and outcoming flows. The very process of calculation is concealed or unknown. W.R. Ashby suggested calling this model «blackbox». Such model is appropriate for cases where it is unknown, how an action is carried out, and it is only important what we need and what we come up with [2].

The model of the «blackbox» is often used for areas of modern economic space where people prefer «ready-to-go» products. We can also see its usage in separate cases when a part of the model doesn´t need to or can be presented in a structural form [2].

In its essence that model of the «blackbox» is quite effective, but it covers a limited number of possible events which is significantly less than one needs to model a process of making a decision. So, its further improvement is needed for a complete presentation of this process.

N.M. Amosov in his book «Algorithms of mind describes» making a decision as a consequence of cases: perception - evaluation - action, and he calls it a «functional act». He also thinks that it is unwise to place a functional act into three cases, and it is cost reasonable to put it into longer consequence that consists of five steps. The first step is perception, the second is analysis, the third is planning, the fourth is decision, and the fifth step is action. N.M. Amosov didn´t limit himself even with five steps in a so-called functional act. He thought that we should analyse greater number of steps in order to see a real picture of decision-making process [1].

The position of N.M. Amosov has its defect. The more steps we study within the chain of making a decision, the fewer cases can be included. Thus, it becomes necessary to develop a more universal action chain.

For a more qualitative cases selection and constructing more universal chain of decision-making we have to use both theories: the one of the «blackbox» and the chin concept, introduced by N.M. Amosov.

The «blackbox» model consists of three components: an entrance - a concealed action, taken to achieve the goal - and the resulting action. As we combine this theory with the concept of N.M. Amosov, we can obtain a model similar to that of the «blackbox», but where three basic events will be present: an event - calculation - reaction. The received action chain reflects a making of decisions quite correctly and completely. Its difference from the chain of the «blackbox» is the perception of the activity part of the model as an uncovered one, in other words, participating in calculations. To reveal the calculation part we can use specific chains that are studied by N.M. Amosov [1].

In the received chain an «event» refers to anything that causes a need to make a decision, in other word, requires taking an action. In the general scheme an «event» stands as a motivating phenomenon that is similar in its essence to an «entrance» according to the theory of the «blackbox». An example of an «event» in reality can be a stock hike, a received report, chemical or physical reaction, etc. Thus, the number and variety of the examples of possible «events» is limited by specific requirements towards a system, to structure which we use the chain of making decisions.

The next within the process of making decisions goes «calculation». This action is the fundamental one in this structure, and its inner part can be the biggest one. To model it we need to use structures by N.M. Amosov [1] that can significantly simplify the modeling and development of the inner part of mailing a decision. But under a more detailed look we have to accept the specific character of structures that we use to describe the system. However, it doesn´t lessen the significance of the selected sequence of actions. If any system could be modeled as a multiplicity of subsystems than some of them could be studied according to the model of the «blackbox», and others could be analysed with various levels of deepening into so-called functional act. A special feature of such work is that it doesn´t require unnecessary efforts and additional structuring to transfer from one scheme of making decisions to another. It can significantly ease the process of working with structures of making decisions that becomes important while studying and composing complex intellectual schemes.

A finalizing step in making a decision is a «reaction». It is a direct action, a response to an event that cased calculations. It is a natural result of any process of making a decision. A «reaction» is derivative action. Hence it received its name within the scheme of decision-making.

Thus, we come to a relatively simple structure of making a decision, components of which cover quite broad limits in possible situation of management process.

Let us study functional features of the structure. Within the process of making decision according to the selected structure a process starts with an «event» that happens and enters the system. The very process of receiving a signal of the beginning of making a decision is the «event». It can emerge in environment through different means and with usage different facilities that correspond to the objective, such as, for example, scanning devices, program modules of sensors of pressure, temperature, speed, etc., in other words everything that can create an event. As we outlined earlier, the main point is the very fact of entrance of any kind of information into the system. It allows our system to «know» that it is necessary to take an action.

After receiving an «event» there emerges a need to calculate that it is necessary to take an action. It is carried out within the process of «calculations» that includes all possible sequence of actions that could emerge within the process of making a decision. An example of possible action sequence can be a part of the decision-making structure that was presented by N.M. Amosov in his book «Algorithms of mind» [1]. The scheme itself consists of three actions: analysis - planning - action. Of course, in reality such system can grow wider because of the increase in the included actions, or deeper because of enriching of inner content of each process. It was underlined by N.M. Amosov himself [1] and is logically reasonable, since a search for solutions of even similar problems can have quite a number of differences and be unique. To realize this rather complex and responsible part of management system it is necessary to use program means that allow us to significantly increase the efficiency and speed of making a decision, but still don´t have any personal perception, and their effectiveness is proved.

The finalizing process in making a decision is the «reaction». The name corresponds to the «outer» perception of this process. This character feature can be observed in a number of management decisions. The system itself can react either actively or passively. It is dependent on the functional needs of the system. The results of making a decision can be reflected via any method that is only limited by situation or individual needs.

Within the process of operation of some systems of making decisions situation when it is unnecessary to take resulting actions are possible. In the logics of making a decision, in its very structure this lack of action that needs to be taken, doesn´t affect the presence of the «reaction». It happens because that lack of need to take an action also has a resulting feature that can be considered as an output of the structure work.

Thus, the introduced structure of making decision is convenient for description of structural features of making a decision because of its simplicity. It allows us to simplify the process of modeling making of decisions. Such modeling can be used in development of decision-making systems and their presentation as reports. At the same time there is a possibility to present a process of making a decision through separate components that doesn´t depend on each other. It can significantly simplify the process of development and further modernization. With sufficient documentation such structuring can multiply the speed of the development of the whole system and its separate elements that has a great importance because of the growth in competition that takes place on European and American market and gaits within Russian economic system.