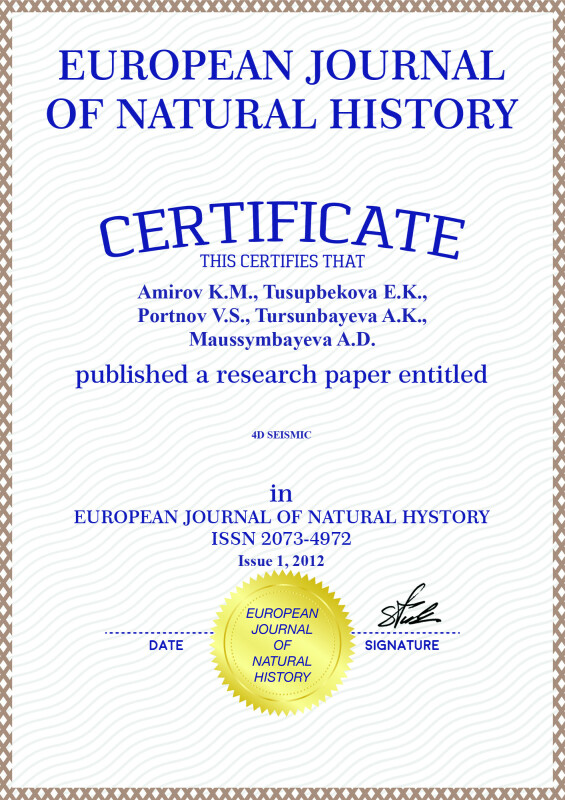 Article in PDF
458 KB
For successful implementation of the 4D seismic observations also contribute careful processing and tight integration of the subsurface disciplines. As the outcome time-lapse seismic was recognized as a powerful and effective technology for reservoir management.

Given paper is performed due to the double degree program realized between Karagandy State Technical University (Karagandy, Republic of Kazakhstan) and Politecnico di Torino (Turin, Italy).

According to Lumley et al., «4D seismic reservoir monitoring» is the process of repeating 3D seismic surveys over a reservoir in time-lapse mode to look for differences caused by production [1]. The changes is the principal effect that brings us a 4D seismic data, while monitoring hydrocarbons movement, fluid type in pores, and the effective pressure which is acting on a rock in combination with temperature increments affecting rock density. Moreover, taking into account seismic velocities changes, the method can predict fluid saturation and pressure changes in the reservoir.

New technologies are rapidly emerging helping to obtain optimal drainage of large reservoirs. In the past ten years, time-lapse (4D) seismic has evolved from an academic research topic to a standard way of monitoring reservoir performance, and seismic data are increasingly used as basic practice as reservoir management tool and to assist in field development planning. The use of time-lapse seismic data in conjunction with reservoir simulation models and well log data allow fluid changes within the reservoir to be qualitatively monitored. Time-lapse seismic might provide valuable information for identifying fluid movements, locating bypassed oil and well placement optimization to reduce uncertainties in reservoir development and production management.

To understand this, let us review the seismic method, and then consider what advantages the time-lapse aspect of 4D seismic brings. In a single 3D seismic survey, seismic waves are generated by sources (dynamite, airguns, etc.) at or near the earth´s surface or in the seawater. These generated seismic waves reflect off of subsurface seismic impedance contrasts, which are a function of rock and fluid compressibility, shear modulus and bulk density, and are recorded as they arrive back at the earth´s surface. The recorded waves form the classic wiggle traces where high positive amplitude portions are often filled in on a black and white image enhance visual contrast and show lateral continuity. A processing workflow is then is applied to the recorded seismic signals to create 3D seismic images of the reservoir rock and fluid property (seismic impedance) contrasts. 4D seismic analysis simply involves repeating the 3D seismic surveys and analyzing images in time-lapse mode, to monitor time-varying fluid-flow processes during reservoir production. The main advantage of 4D approach is that the static properties of the reservoir remain unchanged and hence the differences between seismic parameters in time can be interpreted in terms of dynamic behavior of the field.

The first repeated 3D seismic surveys (known as 4D seismic now) were acquired in North Texas in 1982/1983 to monitor a combustion process around an injection well [2]. Due to the fact that this seismic study had been performed as the first in sui generis and it was ahead of its time the work results have not been approved economically. And now, nearly forty years after its first beginnings, 4D seismic monitoring is more and more recognizing as a proven technology. The technique has, at last, established itself as a valid and valuable reservoir management tool. By the words of Evans (2008) there are three main areas that will shape 4D´s future - repeatability, quantifiable benefits and combined technologies [3]. If the industry solves those matters, and obviously they´re interlinked, the market could be huge.

According to the heightened interest in 4D seismic the task of this work is to provide a review of recent applications of 4D seismic to different problems and in different regions. In particular the following issues have been analyzed:

As an example is provided seismic case study performed at Gullfaks oilfield in North Sea (Figure).

Calibrating time-lapse seismic interpretation with repeated saturation logs. A perfect match between the two data types can be observed. Consequently, time-lapse seismic data can with confidence be used to map the drainage pattern in between existing wells [4]

In this figure is presented time-lapse seismic interpretation with repeated saturation logs from Gullfaks field at which seismic study have been performed for assessing zones of remaining oil after water injection. On the right side of the figure is shown two seismic surveys acquired in 1985 and 1996. Observed changes in the seismic responses from the top reservoir and initial oil-water contact are marked with blue ellipses. The significant decrease in acoustic impedance was identified. On the left side is shown saturation logs acquired in 1992, 1993, 1994, 1995 and 1997. With a black colour is indicated fraction of the pores filled with oil, and blue colour means fraction of pores filled with water. Looking at the last two survey results in 1995 and 1997, we can observe that there is only remaining oil in the uppermost part of the reservoir. For full confidence was compared the seismic data acquired in 1996, and result was the same. The obtained data were the main source of information to build saturation maps that are then used as guidelines to drill infill wells and to perforate intervals with remaining oil. As the result were drilled 14 infill wells with estimated volumes corresponding to 56 million barrels [4].

In conclusion we can say that 4D seismic acquirement has a great contribution for optimizing reservoir management reflected in the following points:

It should be noted that for successful implementation of the 4D seismic observations also contribute careful processing and tight integration of the subsurface disciplines. As the outcome time-lapse seismic was recognized as a powerful and effective technology for reservoir management.