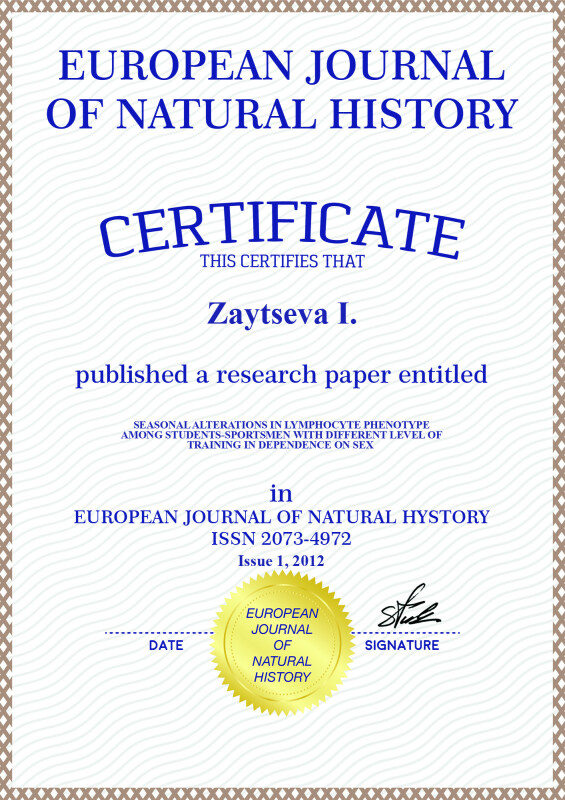 A condition of immune system is significantly affected by a number of indicators of a man´s organism´s reactivity, including sex and various factors of environment, including physical strain, their level, and season. However, no committed and systematic works in this direction have been carried out among students-sportsmen. Therefore, lymphocyte link of immunity has been studied among students-sportsmen depending on their level of training, sex, and season.

Lymphocyte phenotype (subpopulation of lymphocytes CD3, CD4, CD8, CD19) has been studied via indirect immune-luorescent method among 22 students-sportsmen who take sambo wrestling in novice group, 23 students who follow master programme, 18 female students who take basketball section following master programme, and 18 female students who take fitness-aerobics in a novice group. Blood for research has been taken in winter, summer, and autumn. The results have been processed via common methods of statistic analysis.

It has been found that, as a rule, a content of lymphocyte subpopulation among students-sportsmen did not depend on level of their sport qualification and sex. The exclusion was formed by male master students-sportsmen who showed higher numbers of lymphocytes CD3, CD4, CD19 than those among female novice sportsmen. The analysis of lymphocyte phenotype alterations among students-sportsmen of different qualification depending on season regarding sex showed us a reliable prevalence of number of CD3-lymphocytes among sambo masters in autumn, winter, and spring compared to the same indicators of novice sportsmen while no differences were registered between male groups according to cells CD4, CD8, CD19. The highest content of CD3-lymphocytes among novice sambo wrestlers was registered in autumn with the following reliable decrease in winter and especially spring; in summer the number of cells increased, however, it did not reach its initial autumn level. Similar data was received while studying the masters group, and it was supplemented by reliably higher indicators of CD3-lymphocytes in winter, compared to spring and autumn (p < 0,05). The number of CD4 cells suffered seasonal alteration similar to CD3 cells in both groups of male sportsmen. No reliable seasonal alteration in number of CD8-lymphocytes among the sportsmen of both groups. The content of CD19 lymphocytes among novice sportsmen as well as among masters was reliably higher in autumn and decreased in winter and especially spring; a significant difference in higher autumn indexes compared to winter, autumn - to spring, autumn - to summer, winter - to spring. Lymphocyte phenotype among female sportsmen looked differently. Among basketball players of high qualification, compared to women who took fitness-aerobics a reliable increase in CD3-lymphocyte content was registered only in autumn, and CD19 - in autumn and winter. No difference was observed in content of CD4 and CD8 cells between both groups of women in different seasons of year. Among women novice the number of CD3 cells was significantly higher in autumn than in winter; other seasonal differences were unreliable in this group. Among basketball players of high qualification seasonal differences in content of CD3 lymphocytes were more expressed - their highest content was registered in autumn and winter with further reliable decrease in spring and staying at the same level in summer. A reliable difference in higher number of CD3 cells was registered in this group in autumn compared to spring, autumn - to summer, winter - to spring, winter - to summer (р < 0,05). Seasonal comparisons of indicators of cellular lymphocyte immunity in both women groups according to the data of CD4, CD8, CD19 cells did not show any statistically reliable differences. Statistical analysis in dependence on sex testified for reliably higher contents of CD3, CD4, CD8 -lymphocytes among male novice sportsmen and masters, compared to the same data of women groups that take novice fitness-aerobics classes and basketball as masters.