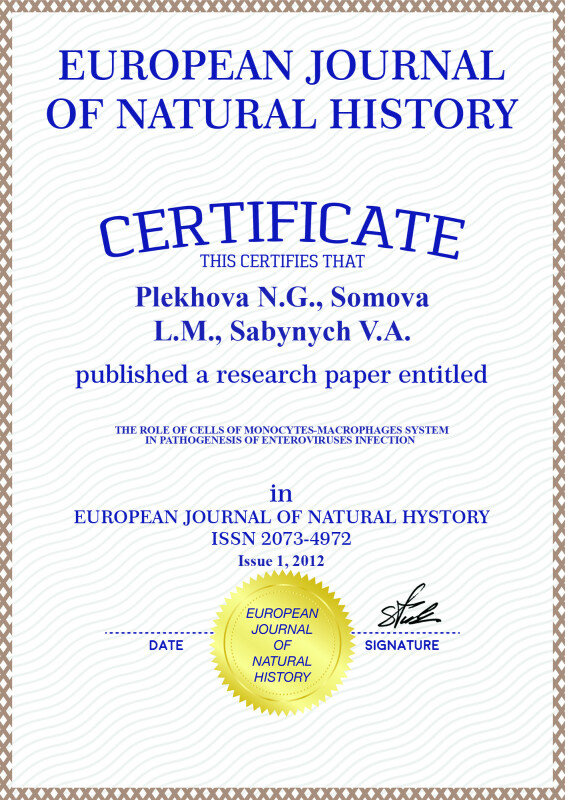 The Picornaviridae family includes RNA-containing viruses with diameters of 22-30 nm. The viruses of this family are exciters of acute infections, e.g., the poliovirus attacks the neurones of the spinal cord, Coxsackie viruses of group V infect the central nervous system, Type 71 enteroviruses cause conjunctivitis, and Echo viruses cause intestinal infections [5]. In the enteroviruses infection pathogenesis study the discovery of the reproductions viruses foci at initial period of the disease fall into important and for this moment to undecided question. The role of the mononuclear and macrophages systems cells in pathogenesis these of infection has an especial meaning, escalated fact of the ubiquitous spreading of these cells in organism of the person. It is known that integrins (glycoproteins, consisting of various combinations of α- and β-chains) are involved in the adhesion of different types of viruses, and these receptors are also present in the membranes of macrophages [4].

The primary breeding of enteroviruses occurs in the tissues of the respiratory and intestinal channels. This process ensues from a primary viral infection of the blood and there is evidence that the enteroviruses may be isolated from mononuclear cells of the peripheric blood of infected people [1, 2].
Based on the abovementioned facts, the purpose of the present research is to define the probability of adhesion and penetration of an enterovirus into resident macrophages.

Materials and methods of research. Vaccines of the poliovirus strain, enterovirus Type 71, the Karimov strain of Echo11, and a Coxsackie viral strain from group B1 that is virulent for newborn white mice were used for the infection of primary culture of macrophages. In our experiments, we used a supernatant virus-containing cultural liquid that contained no less than 5 units multiplicity of infection on macrophage for a Type 71 enterovirus, Echo11, and Coxsackie B1 and at a low 3 MOI for poliovirus. The contact of virus with cells was for 60 min and then unadsorbed viral particles were washed thrice by serum-free RPMI and monolayer of cells was incubated to 4 days post infection (pi).

An estimate of the dynamic accumulation of viral antigens in cells by indirect method of fluorescent antibodies was used (iMFA). The cells were stained with indicated antibodies to viral proteins followed by Alexafluore 546 conjugated secondary antibodies. Slides were examined by a LSM510META multiphoton confocal laser scanning microscope (Carl Zeiss, Germany). Alexa-488 immunostain was excited using 488 nm light from a Krypton-Argon laser and the Alexa-546 dye was excited.

The detection of virus RNA was performed with the help of PCR, using a test - system «Ampli Sens Enteroviruses». For quantitative identification of enteroviruses proteins in macrophages immunoenzyme test-system was used.

Electron Microscopy: The monolayer of macrophages was prefixed in 1 % glutaraldehyde in 0,1 mol/L cacodylate buffer for 18 hours at room temperature, then was postfixed for one hour in 1 % OsO4 in same buffer, dehydrated in a graded series of ethanols and embedded in epon-araldite medium. Thin sections unstained or stained with lead citrate were examined in Jeol 100 S electron microscope.

Results of research and their discussion. The macrophages were detected with enterovirus of the cytoplasm after a 15-min post-infection. After that, the specific antigen was found out also and in perinuclear space of macrophage cytoplasm. The quantity of antigen-containing cells depended on the terms of incubation. Thus, after 1 h of joint incubation with enteroviruses, the quantity of antigen-containing cells ranged from 26,7 ± 3,5 % (during infection with poliovirus) to 68,3 ± 4,6 % (during infection with Coxsackie B1 virus) and, after 3 h, from 48,3 ± 2,8 to 39,0 ± 2,07 % accordingly. Within 24 h, the quantity of the antigen-containing cells was reduced to 12,0 ± 1,6 % (polioviruses) and 26,4 ± 1,7 % (Coxsackie B1 virus); at the end of observation term (48 hours), they were not found.

The evaluation of the quantity of RNA and by the PCR methods and specific antigen proteins immunoenzyme test-system in macrophage cells during definite periods has revealed the presence of viral components. These results indicated on ability of enteroviruses in penetration in macrophages. The reproduction of virus was defined only in ECHO11 infection and the permission was revealed in Coxsackie B1 infection.

The morphological examination of the cell culture infected by enteroviruses revealed the features of the cytopathic action of this virus on macrophages. The activated cells with typical morphology (big nucleus and rounded cytoplasma) were observed after 1 hour post ECHO11 infection. The stimulation of cells absence was noted in poliovirus infection, and the cytopathic action this virus was defined at 18 hours post-infection. In this period, macrophages with karyorrhexis were detected.

During the study of macrophages infected by Type 71 enterovirus and Coxsackie B1 virus, it was detected that the viruses are capable of adhering to a macrophage surface within the first minutes of contact. During the initial stage of virus penetration the invagination of macrophagic plasmalemma was seen. The endocytoplasmatic vacuoles were formed after 15 min p.i. enterovirus type 71 and Coxsackie B1 infection (Figure, a). These vacuoles were identified as caveolae, as their diameters were 70-100 nm.

The adhesion of poliovirus to a macrophage surface was detected within the first minutes following the infection of the cellular culture (Figure, b).
Later on, we observed the penetration of poliovirus into the cytoplasm of macrophages through caveolae, as well as by the local lysis of plasmolemma (Figure, c). Later on, in macrophages infected by this virus, the formation of numerous pseudopodia was observed.

The Echo11 enterovirus enters into cytoplasm of macrophages through the local lysis of their plasmolemma. Aside the enterovirus Echo11 penetrated in macrophages by mechanism the formation of endocytic vacuoles that included viral particles after 15 min post-infection (Figure, d). It is necessary to note the presence of the specific activation of macrophages in response to infection by viruses Echo11; the formation on the surface of phagocytes of valve-shaped pseudopodia containing electron-dense granular actuations testifies to this.

The intracellular localization of virus Echo 11 and site of viral synthesis in macrophages were studied by using electron microscopy. The viral particles were observed within the cytoplasm and mainly were localized beside on the granular endoplasmic reticulum compartments and in the perinuclear region cytoplasm of infected cells. In this period the sizes of the viral particles nucleotides were increased, and thin capside was noted. After 4 hours post-infection, the formation of virus-inducted structures in perinuclear area of macrophages cytoplasm were observed. This is a lamellar structure and the concourses of multiple varied microfilaments: tubular and filaments. The filaments morphologically were differed on long filaments and ribonucleic thrends, which had mace-like bulge on the ends.

Together with appearance of virus-specific and virus-induction structures, the brightening of in cytoplasm peripheral in result transference of cell organelles in perinuclear area was fined in the macrophages in this time (4 h p.i.). Here the concourses of ribosomes, microfilaments and different vacuoles were determinated. Also the formation of phagosome-like structures and extended compartments of endoplasmic reticulum and increase of free ribosomes were fined in these cells.

The signs of cytoplasm desorganization in macrophages infected by poliovirus were noted after 5 h post-infection. This was expressed in appearance of the large vacuoles in result of merging compartments endoplasmic reticulum. At the same time, in result des-aggregation and re-aggregation of membrane-including organelles formed the multilayers myelin-like structures occupied all cytoplasm of macrophages. In these cells the nucleus had sign of degradation: extended perinuclear area and fragmentation of chromatin. The outputs of newly formed viral particles in extracellular space were realized by way of separating on the phagocyte surface after 4 h post-infection.

The enterovirus enters into cytoplasm of macrophages: a - the endocytoplasmatic vacuoles were formed after 15 min p.i. enterovirus type 71; b - the adhesion of poliovirus to a macrophage surface within the first minutes; c - the caveolae and enter of poliovirus by the local lysis of plasmolemma; d - the endocytic vacuoles after 15 min p.i. of Echo11

The adhesion on the macrophages surface and penetration with reproduction in this cells of enterovirus from virus-included liquid was determined by virological and morphological methods. The type of macrophages infection belongs to isolated system, because the activity of EV genome and reproduction of viruses were in cell cytoplasm. The present in macrophages of the product acute fatal infection were conducted by appearance in process of the reproductions full-function virus ECHO 11 with expressed cytopatic action on swine embryo kidney cells culture, also the formation of virus-specific and virus-induction organelles in cytoplasm toxically and mechanically caused cells destruction.

According to recent literature distinguishes 6 types of viruses to cells [3]: macropinocytosis, three types of endocytosis, with the formation of caveolae and similar last mechanism dependent on dynamin. The method used in this study allowed us to reveal tree difference routs of virus family Picornoviridae enter into macrophage, exclusive of macropinocytosis. Herewith the specific route of macrophages plasma membrane penetration was determined for each genus
of its viruses.

ECHO11 virus and was able to traverse the lipid bilayer surrounding the macrophage, without killing the cell. Herewith EV penetrated inside of cell and disassembled itself in such. In result its genetic information and any associated enzymes remained intact and the viral RNA and associated enzymes were directed to the appropriate cellular compartment. Consequently, in the absence of denominated destructive changes mononuclear phagocytes can act as the long source of virus and take certain part in process of ECHO11 virus dissemination in enteroviruse infection.

Thus enteroviruses resists to monocytes/macrophages influence and capable to intracellular reproductions in them, overcoming, thereby, biological barrier, protecting from infection high-sensitivity cells of the central nervious system and parenchymatous organs and preventing spreading the agents from primary foci of infections.

Acknowledgment: This investigation was supported by a grant (16.740.11.0182) from The Ministry of Education and sciences Russian Federation.

The work is submitted to the International Scientific Conference «Homeostasis and the infectious process», Egypt (Hurghada), 20-27 February 2012, came to the editorial office оn 13.01.2012.