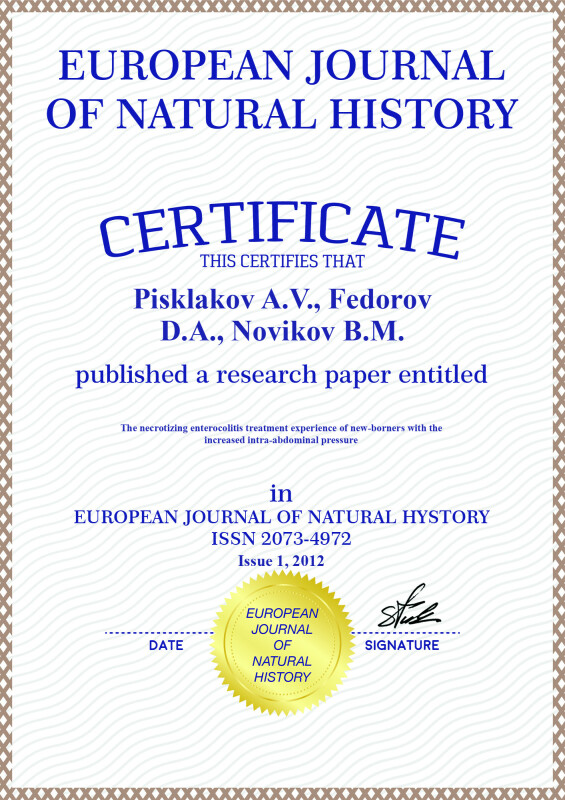 Measuring of intraperitoneal pressure (IPP) among babies with necrotizing enterocolitis (NEC) in carried out in the clinic of children´s surgery since 2007. Pressure monitoring was carried out among 46 newborns, treated in Omsk regional children´s clinical hospital (OCCH). Among those 15 with the 2nd, and 31 - with the 3rd and 4th stage if NEC. The measure of IPP among babies with the II stage of NEC was carried out in accordance with recommendations of Worldwide society of studying intraperitoneal hypertension (WSACS) through measuring pressure in bladder and stomach with a low-pressure monometer «Triton IiND 500/75» (Russia). For babies with the 3rd and the 4th stage of NEC that were treated with laparocentesis, we additionally used the direct method of measuring intraperitoneal pressure.

For all patients intraperitoneal pressure was measured every 4 hours. An IPP that exceeded 12 mm of mercury was considered pathological. In all cases indexes of IPP exceeded normal values and oscillated between 15 to 51 mm of mercury. All babies with the 2nd stage of NEC were treated conservatively. IPP within this group of patients equaled 20,1 ± 1,9 mm of mercury during the first day, 17,3 ± 2,1 mm of mercury on the second day, and reliably lower than 15 mm of mercury on the third day of treatment.

Four babies with the 3rd stage of NEC were treated conservatively. Constant direct intraperitoneal pressure monitoring and laparocentesis was implemented for them. During the first day of treatment IPP equaled an average of 22,3 ± 5,1 mm od mercury, on the second day, due to the treatment in lowered to 19,2 ± 4,1 mm of mercury, and on the third day in equaled 15,3 ± 2,6 mm of mercury. By this time their condition improved, bowels motor functions started to restore, intoxication symptoms decreased, peritonitis signs were removed.

From the group of patients with NEC whose IPP was monitored, 27 children were operated. 4 patients were with the 3rd stage of the pathology, and the rest 23 - NEC with a perforation of genitals. All babies were treated with laparocentesis and direct measure of IPP prior to surgery. Initial pressure among these patients exceeded a value of 40 mm of mercury and equaled an average of 45,3 ± 2,2 mm of mercury. During the preparations that didn´t exceed 3 hours, IPP never lowered down to 30 mm of mercury at least. Of all operated children 11 died. Their IPP didn´t come lower than 30 mm of mercury. Among the rest patients IPP decreased reliably.

From 2010 all children with the 2nd and higher stage of NEC are treated with caudal anaesthesia that decreases the time of removing NEC symptoms, including showings of intraperitoneal hypertension. Thus, of 5 babies with the 2nd stage of NEC who were treated in 2011, negative dynamics was never observed, and a decrease in IPP lower than 15 mm of mercury was registered on the second day after surgery.

So, we see a clear dependence of IPP value from the condition of pathological process in abdominal cavity, therefore opportune diagnostics and correct treatment, considering possible correction of intraperitoneal hypertension syndrome is the foundation for successful therapy under such conditions.