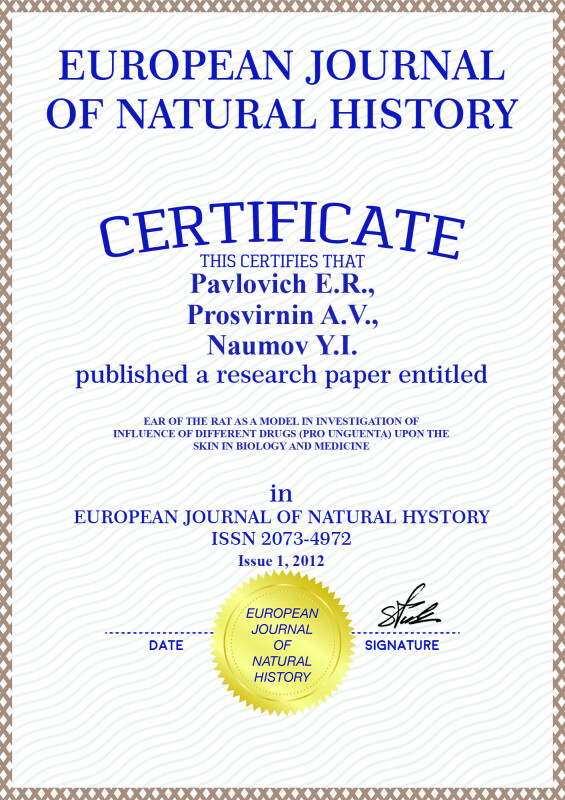 In many studies of medicinal activity of preparations on biological models a skin is used as an indicator for intradermal introduction of a medication. Thereby a skin from an animal´s back or stomach is used. Such impact often requires a careful shaving of a local skin area that disturbs skin and stresses an animal. As an alternative model of studying intradermal impacts of medical and cosmetic agents we suggest studying ear skin of small laboratory rodents (rats, mice) that do not have that much hair on ears, compared to their back or stomach. Ear ski is relatively thin and is located over two surfaces that allows us to use one of them as a control. Besides, as an animal has two ears, we can receive another control organ or use it for another dose of the same agent as well as to study an impact of another preparation. In our work we used grown mature male rats of weight 250 grammes. The preparation was introduced as an ointment over one side of an ear. An animal was slaughtered under Nembutal narcosis, then an ear was removed and placed into 4 % paraformaldehyde for no less than a day under the temperature of 4 °С. Spirituous conducting of material and its placing into epoxide gum Araldite was carried out as in our previous publication [Pavlovich, 2008]. A cutting of mid-thin cuts (thickness of 1 mkm) of a rat´s ear perpendicularly to its surface. Cuts were colored by a water solution of toluidine blue. It was shown that in the control an ear consisted of two skin plates that were separated by a thin layer of fat. The skin was represented by a multilayer flat cornific epithelium and nearby connective tissue that was relatively undeveloped, compared to human skin. The skin had a lot of hair that was differently directed in relation to the ear surface. Cornific skin layer was displayed unevenly along the epidermis. Hair follicles were found in hypoderm and cut on different levels, and fat glands. Microvascular channel in the studied material was presented moderately. Possibilities to use ear skin of small rodents as on object of impact of medical preparations in pharmacology and toxicology (as ointments or solutions for cutaneous and intradermal introduction), and also in cosmetology are discussed. The model allows us to reveal and remove possible allergic reactions and pathological impact of some preparations over skin. Thereby, animals of different sex and age can be used that allows us to carry out correct pre-clinical studies of preparations and cosmetic agents.

The work is submitted to the International Scientific Conference «Modern Problems of Experimental and Clinical Medicine», Thailand, 20-28 February 2012, came to the editorial office оn 18.01.2012.