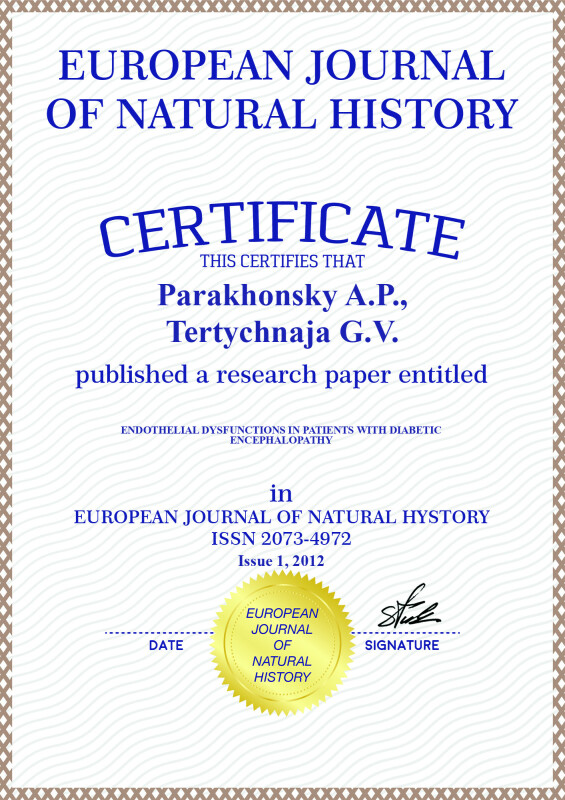 Vascular endothelium damage is known as one of the major mechanisms in pathogenesis of chronic complications diabetes mellitus (DM). Encephalopathies of various genesis tend to be the most important problem of present medicine. Diabetic encephalopathy (DE) is commonly considered to be a variant of dyscirculatory encephalopathy. The indices of circulating desquamated endotheliocytes and endothelium-dependent vasodilatation (EDVD) of brachial artery were studied to detect the degree of endothelial dysfunction in patients with DE in comparison with patients that suffer from discirculatory encephalopathy of non-diabetic genesis. The aim of our study was to study differential peculiarities of EDVD in patients with diabetic and non-diabetic encephalopathy. EDVD was evaluated according to Celermayer-Sorensen´s test. The study demonstrated, that dyscirculatory encephalopathy was followed by reliably significant (Р < 0,001) decrease of EDVD rate (5,6 ± 0,21 %) as compared with controls (10,8 ± 0,51 %). In case of DE the rate of EDVD was more than two times decreased (4,9 ± 0,23 %) as compared with control rate (Р < 0,001). EDVD was more affected in type 2 DM (4,5 ± 0,29 %, Р < 0,05), than in type 1 (5,5 ± 0,31 %), that indicated more severe damage of vascular endothelium in case of non-insulin-dependent DM. It is necessary to mention, that changes of EDVD in DE were reliably more evident as compared with patients suffering from non-diabetic dyscirculatory encephalopathy (6,4 ± 0,29 %). This is explained, as we concluded, by the direct toxic influence of increased glucose concentration on vascular endothelial cells. This toxicity may lower the endothelium-dependent vasodilatation, elevate the vasoconstriction, and stimulate the hyperplasia of smooth muscles cells, lead to vascular remodeling and development of atherosclerosis. Endothelial cells line the entire circulatory system, from the heart to the smallest capillary. These cells reduce friction of the flow of blood allowing the fluid to be pumped further. Circulating endothelial cells might be used as a surrogate non-invasive marker for the study of vascular alterations. findings demonstrated, that endothelial desquamation was observed in the group of healthy individuals as well as in the group of patients, suffering from DE. In healthy individuals blood level of desquamated endotheliocytes accounted 3,2 ± 0,36·104/l. In patients with stage I DE this index reached 12,8 ± 0,64·104/l, stage II DE - 16,5 ± 0,58·104/l, stage III DE - 19,2 ± 0,71·104/l. Statistically significant changes were found between groups of patients with stage I and stage I DE (Р < 0,001), and with stage II and stage III DE (р < 0,01). Consequently, the progression of DE was followed by proportional augmentation of the blood concentration of desquamated endothelioin cytes. The index of endotheliocytemia was reliably higher in type 2 DM as compared with type 1 diabetics (Р < 0,05), that indicated more significant implication of vascular endothelium damages in the pathogenesis of non-insulin-dependent DM. The role of endothelial dysfunction in type 2 diabetes is more complicated than that for type 1. The effects of aging, hyperlipidemia, hypertension, and other factors add to the complexity of the problem.

The work is submitted to the International Scientific Conference «Modern Problems of Experimental and Clinical Medicine», Thailand, 20-28 February 2012, came to the editorial office оn 07.02.2012.