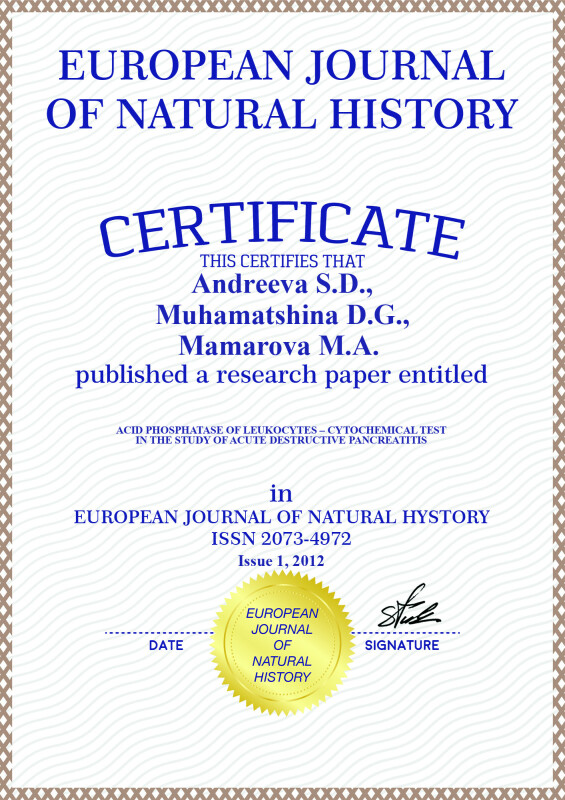 Inflammatory processes in the pancreas increase the permeability of cell membranes of acinar structures body, which causes an increase in enzyme levels in blood and urine, including acid phosphatase (AF). It formed in the endoplasmic reticulum of metabolically active cells, and includes a number of isoenzymes, with a common pro-
perty - the ability to release phosphate from many alcoholic or phenolic phosphomonoaethyrof in acidic medium. We have performed cytochemical study using semi-quantitative method, which made it possible to identify changes in the content of AF in blood cells of rats with acute destructive pancreatitis (ADP).

In the experiment was used cryogenic model of acute pancreatitis. Experiments were set at 25 mongrel white male rats weighing 190-270 g (group 1). The second group (n = 15) consisted of animals that were subjected to median laparotomy and 1,5 - min exposure of splenical segment of the pancreas without influencing it chloraethilum. Control (intact) group consisted of 5 rats. AF was detected in the form of pellets red in the cytoplasm of neuthrophils and lymphocytes.

In the lymphocytes stained grain that signals the presence of acid phosphatase, located diffusely in the cytoplasm. In intact rats cytochemical factor was in average 0,18 ± 0,01. Since the beginning of the ADP (CBFV during the first day - 0,79 ± 0,1) increased 4,3 fold higher compared with intact animals, indicating an increase in phagocytes function and lysosomal activity agranulocytes. In animals with severe forms of development pancreatitis significantly risen in the cells of the blood content of acid phosphatase (a marker of lysosomal enzymes), reflecting a more pronounced and profound degree of destructive changes in the parenchyma of the pancreas prostate. Elevated AF in leukocytes indicates the metabolic activity and the ability of these cells for phagocytosis. The proposed technique complements the classical cytochemical laboratory and immunological studies to identify cell surface markers and functional state of the organelles of blood cells in acute destructive pancreatitis.

The work is submitted to the International Scientific Conference «Modern Problems of Experimental and Clinical Medicine», Thailand, 20-28 February 2012, came to the editorial office оn 13.01.2012.