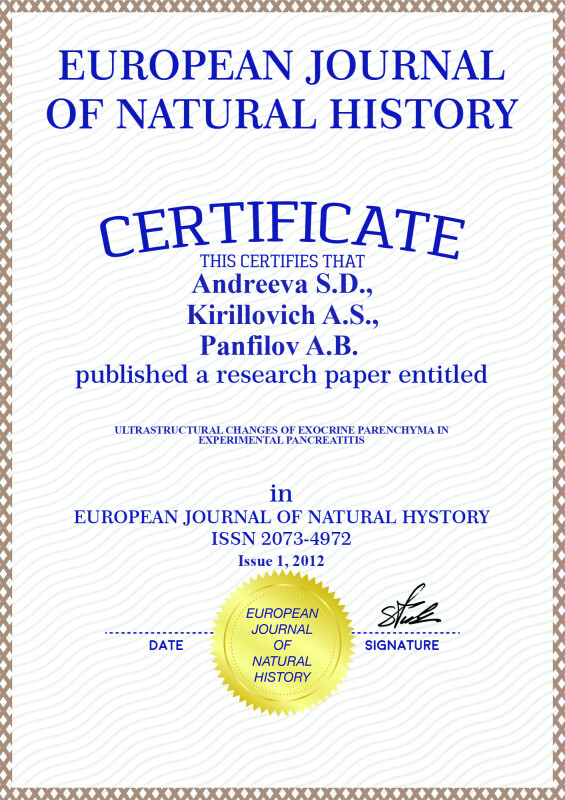 Research purpose: to study in a dynamics (on the first, on the third, on the 7th are 14th days after an operation) the ultrastructural changes of pancreas of rats at experimental acute destructive pancreatitis and in number to estimate character of changes of exocrine parenchyma of pancreas of rats.

For research 40 not thoroughbred males of white rats served material by weight 180-200 g Experimental acute destructive pancreatitis reproduced by cooling of spleeny segment of pancreas of chlorethylium. For ultramicroscopic research the pieces of pancreas processed in obedience to the generally accepted methods and probed by the electronic microscope of JEM-100С (Japan). For the micrometric estimation of the functional state of acinocytes utilized analysis of images of Image Scope Color M (Leisa, Gmbx).

There was an edema of acinocytes at development of sharp destructive pancreatitis, kernels are dropsically and wrong form, have fine-grained chromatin which is localized on periphery. A nuclear-cytoplasm relation is increased on 6 % as compared by intact animals. The granules of zymogene are diffusely dissipated in a protoplasm, have a high electronic closeness, their sizes was different. The mature granules of zymogene have the appearance of the dense rounded little bodies, along with them there are prezymogene and «light» immature granules. It testifies to the dystrophic processes, what be going on in acinocytes. The relative area of zymogene grains for certain is increased to 20,3 % to the general area of cage. There is plenty of immature zymogene granules with a small diameter (19,3 ± 0,84 nm) and small area (393,0 ± 26,6 nm²).

It is set that at development sharp destructive pancreatitis takes a place a synchronization of secretary cycle with appearance of heterogenic acinocytes and diminishing of stake of zymogene granules, having insignificant sizes, their diameter makes 28,5 ± 1,56 nm, for intact rats - 42,6 ± 4,38 nm. Lytical destruction elements of parenchyma, accompanied an edema and necrosis of acini´s cages that testifies to the decline of outside secretary function of organ and development of destructive defeats of pancreas.

The work is submitted to the International Scientific Conference «Priority areas of science, technology and engineering», Italy (Rome-Florence), 10-17 April 2012, came to the editorial office оn 16.01.2012.