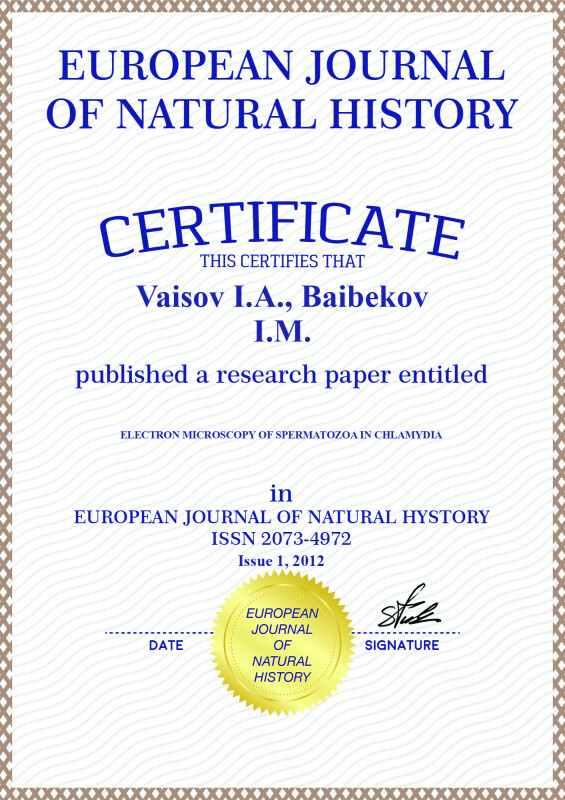 ELECTRON MICROSCOPY OF SPERMATOZOA IN CHLAMYDIA

Article in PDF
532 KB
Spermatozoa of individuals with normospermia and of those diagnosed with chlamydia have been studied using scanning electron microscopy (SEM). Chlamydia causes deformation of the tails of spermatozoa, their bifurcation and scalloped appearance. There also take place deformation of the head of spermatozoa in the shape of hourglass, the appearance of sphere-shaped heads with grooves and inclusions on their surfaces.

Despite the fact that various techniques of electron microscopy, including transmission and scanning types were used for studying biological objects for more than half a century, the assessment of functional morphology of the spermatozoa have been used recently [2, 5-10]. Implementation of these techniques in practical andrology contributed to accumulation of sufficient knowledge of normal functional sperm morphology. It was found that spermatozoa are not a homogeneous population of cells. A considerable part of them contain certain abnormalities. At least 30 % of the spermatozoa in the ejaculate of fertile men should be morphologically normal [3, 4, 9]. Morphological changes in spermatozoa can be caused by many factors, including the effect of high temperature [1].

Chlamydia has marked effect on male fertility, which is conditioned in the first place by the direct effect of infection on sperm cells [11].

However, the impact of chlamydia on the condition of the spermatozoa in ejaculate, especially on their morphology, was not studied with the use of scanning electron microscopy (SEM).

In order to study spermatozoa with SEM, we used a modified method of SEM tissue processing. After receiving semen into clean bottles by masturbation, the sperm was kept at room temperature for 30-40 min for liquefaction of the ejaculate. Then 5-fold volume (usually, the volume of ejaculate did not exceed 2 mL) of 2,5 % solution of glutaraldehyde with phosphate buffer was added to ejaculate in bottles. Such, the quantity of fixative averaged to 10 ml. After fixation for 1,5 hours, the ejaculates were placed in centrifuge tubes and centrifuged at 5000 rpm for 5 min. After removal of the supernatant volume of fixative the sediment was rinsed with phosphate buffer twice. Then, 1 % solution of osmium tetroxide with same buffer was added for fixation for 1 h. After careful pouring of the fixator out, the sediment was rinsed with cold 50 % alcohol and filled in with the same concentration alcohol for 10 minutes. After that, the samples were dehydrated with alcohol and acetone according to conventional methods. After dehydration in the last portion of acetone, the precipitate was fragmented into pieces that were afterwards placed into containers and dried by the transition through critical point, in the apparatus НСР-2. Then the dried pieces were mounted on foil plates with current-conducting adhesive and sputtered with gold in the apparatus of IB-3.

Samples were studied under microscope «Hitachi S-405A»; photographs were obtained from the display screen of the microscope with digital camera Canon. Photomicrographs were processed with computer software «Computech», OS Windows XP.

The studied ejaculate was of 18 patients with diagnosed chlamydia infection and of eight individuals without a pathology of the genital organs (control).

In normospermia, the majority of spermatozoa have a regular oval shape. The contours of the head, neck and tail were even. Small cytoplasmic droplets were sometimes defined in the neck. The ratio of length to width of head by SEM samples comprised 1,5:1,75. Head length ranges within 4-5 microns, width - 2,5-3,5 microns. As a rule, the tail is straight or slightly curved. Its length reaches 45 microns. It is possible to see the flatness of head with SEM (Fig. 1).

Substantial changes occur to the spermatozoa of patients diagnosed with chlamydia. The surface of their tails and heads becomes uneven; indentations and inclusion can be seen  (Fig. 2, 3). Spermatozoa with twin tails and deformed heads are detected quite often (Fig. 3, 4).
There are bulging places alternating with constricted on the surface of tails. They acquire a scalloped appearance (Fig. 3, 7). There are also tails with curled tips (Fig. 5). There are spermatozoa that appear to have tails thick and bifurcating in the distal part (Fig. 3) and others, having two thin, extending from one head; the bifurcation of tails is sometimes seen in case of thin tails also (Fig. 4). Quite often spermatozoa have deformed in the form of an hourglass heads, (Fig. 6) or ball-shaped with indentations (Fig. 7).

The surfaces of the tails and mainly the heads contain discrete circular formations, 0,2-0,3 microns in diameter, coinciding with the size of chlamydia (Fig. 8).

Hereby, the conducted studies suggest that chlamydia causes significant changes in the shape of spermatozoa; it leads to appearance of deformed heads, doubled and deformed tails in spermatozoa.

The discrete formations on the surface of tails and especially the heads correspond to the chlamydiae as by size as well as by shape.

Early experiments to investigate the nature of any interaction between spermatozoa and C. trachomatis relied upon electron microscopy to examine the possibility of interaction between them [11]. However, although these experiments generated useful micrographs of bacteria closely associated with spermatozoa, the observations provide no information about the functional status of the spermatozoa, nor did they provide support for the argument that «piggy-backing» on spermatozoa was a mechanism by which C. trachomatis was spread through the female reproductive tract (see above).

Our studies, performed with SEM revealed that a significant number of spermatozoa with deformed heads and tails appear in the ejaculate of individuals with chlamydia. The spherical discrete particles, detected on the surfaces of tails and especially heads, may represent chlamydia.

Fig. 8. Spermatozoon with inclusions on the surface of the head SEM x 10000

The question as to whether C. trachomatis infection leads to a reduction in semen quality has been difficult to answer until recently because the many studies ducted have often provided conflicting and confusing results.

The revealed by SEM abnormally changed forms of a significant part of spermatozoa, allows to side with the view that chlamydia, causing deformation of spermatozoa, may cause disturbances in sperm quality and contribute to infertility [10, 11, 13].