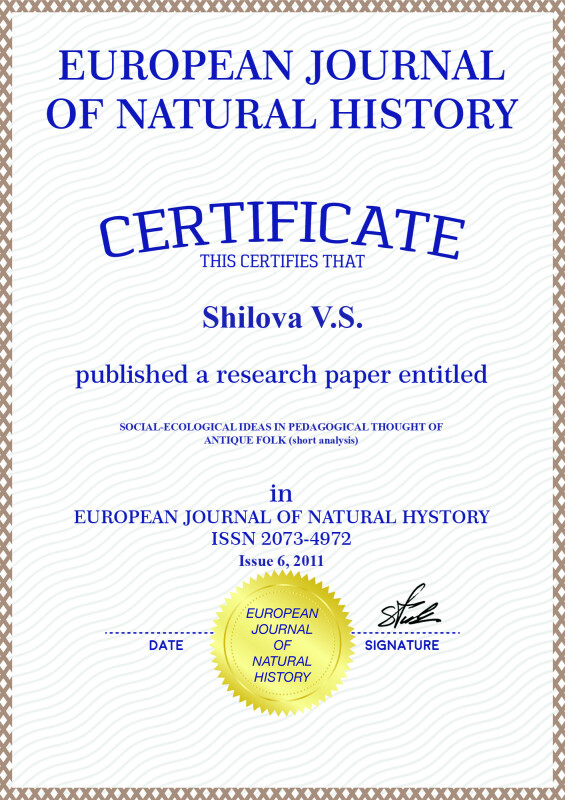 A necessity to solve modern problems of interaction between the society and nature requires constant attention in different areas of human life and activity. A solution and prognosis of social-ecological relations is mostly defined by experience of former generations. The main forms of its accumulation, keeping and transition to new generations are presented by multi-level knowledge, means of practical activity in natural environment, creative and emotional-value attitude to it. Up to modern days we receive information on peculiarities of usage natural conditions and recourses by nations of antique ages, thus defining the nature of our interaction with nature in present and future. Let us refer to social-ecological heritage of antique nations.

Theoretical analysis of scientific sources allowed us to learn that a need for transition of knowledge on our environment and other people arose in antiquity, during the primitive communal epoch. Different factors provided for it: natural terms (geographical peculiarities, vegetative and animal communities, inhabited territories, etc.) and the necessity to accommodate to them; social terms, where the main is the necessity to familiarize new generations to labour, in other words, interaction with nature, its various kinds and methods. The need for self-preservation made people actively study their environment and transit their experience to new generations. Gradually a need for people who would carry out such transition professionally - tutors arose, and then for special institutions, including those for different sexes, ages, and spiritual upbringing [1; 3].

First ways to use natural resources that were transited to children were: land use (collection of edible plants) and hunt for wild animals; usage of water resources (household needs, fishing, games, etc.). By getting involved into the direct process of nature management, children adopted its different methods, such as land processing with simple tools of laubor; modern methods of hunting (traps, bows and arrows, etc.); wood usage, etc. Children also received the experience to reflect their environment, first of all, through different kinds of art: drawing, dancing, singing, oral creativity, modeling, etc. The content of process of transiting this experience is shown, for example, by the production of primeval art. Form written sources we see evidence of antique Greek and Roman philosophy, starting from the period of antiquity. From them we learn about everything that is related to an upbringing of that time, including the area of a man´s interaction with nature [2; 3].

Up to modern days we preserved ideas of thinkers of Ancient East, Antique Greece and Rome on the impact of nature upon the development of the inner world of a child. Thus, ideas of impact of the environment upon the formation of a child can be found in Holy Books which all nations have. The most well-known among them are: the Bible (the ancient Jews), the Avesta (the ancient Irish): Vedas, the Mahabrahata, Ramayana (the ancient Indians); myths and legends of ancient nations. It is character that, for example, at first in myths gods were imagined as plants and animals and their introduction to children allowed them to form their image of the environment, people, an individual; norm of attitude towards nature and human. As an argument for that we can provide, for example, the myth by ancient Egyptians «Isida the charmer and caller», in which God Rah is described - the greatest of all gods that created himself, the earth, water, air, gods, people, animals, cattle, worms, birds, and fish... Even these lines give us information on the environment of that time: the natural and social environment. In nature its main components are outlined: earth, water, air, animals and plants [2; 5].

Similar educative function is carried out by other myths, legends, poetic forms of the reflection of reality: «The Poem of Gilgamesh» (Mesopotamia); «The Fall of Moon», «The Sun and Ocean» (Hittites, III thousand year B.C.); Bible legends: «The making of World», «Edem garden and making of Eve», «Noah´s ark», etc.; Vedas (II-I thousand years B.C.), myths on Buddha (IV century B.C.), Ramayana (III-IV centuries C.E.), «Mahabrahata» (II thousand years B.C.) - ancient India; «The Book of Songs» and «The Book of Stories» - ancient China (app. II thousand years B.C.). Scientists have established that a myth replaces science and art for a primeval man, gives him a full knowledge of what an adult should know and remember, calls for different emotions, pushes towards actions and deeds. Mythological heritage is represented by myths: cosmogonical (the nature of space), anthropogenic (the making of man), eschatological (the end of the world), etiological (the nature of different things and phenomenons of nature and society) [Same].

In general, these and other works of antiquity are not only means to reflect the reality, great monuments of culture, but also important sources of cognition of natural and social reality of the past that today allow us to study the distant antiquity: natural terms of human making, social life and activity, relations between the society and nature, methods of nature management, initial forms of protection of separate components of nature, peculiarities of establishment of harmony in social-ecological relations [2; 6; 7].

Therefore we have to admit a great influence of Confucius (551-479 years B.C.), the great thinker and tutor of Ancient China. Many of his ideas still carry their upbringing significance. He paid a huge attention to problems of a nature´s impact upon the process of making a child´s personality. Confucius compared a perfect man with growing of seeds («... a man gets more intelligent just like seeds grow - permanently, involuntarily, and interminably: there is no limit for perfection. Such organic growing of spirit doesn´t know dramatic turns of destiny or critical moments...»). He thought this way to be endless and necessary for a man. His words «The real mistake is made by one who does not correct his former mistakes» sound very urgent for social-ecological relations and correction mistakes in nature management. Thereby it is comforting that modern society acknowledges the fact that natural resources are limited, some of them are irretrievable, their extravagant management is not correct, and the necessity to change the way of interaction with nature in future. In this context we should outline the role of upbringing with the process of a child´s development, to which Confucius paid a great attention. He wrote, that «... if nature replaces civility in a man, we will have a savage, and if civility replaces nature, we will have a scribe. Only that who combines nature and civility in himself can be called a worthy man». Obviously, even then the thinker considered it necessary to aim for harmony with self and the environment [4].

A big follower of Confucius was another thinker of China - Meng-tzu (app 372-289 years B.C.). His works study problems of interaction between the society and nature and contain examples of negative impact of the society upon its environment; an impact of outer circle upon the upbringing of a child. As the thinker sees it, the main that forms a man is his philanthropy and justice; if these feelings are always exposed to strikes of evil deeds and aren´t replenished, then a man´s nature stays close to animals... Such condition of a human feeling of goodness he compares to the condition of forest of the mountain Nu that «... used to be wonderful, but, as it became the suburb of a country´s capital, its forests were cut with axes. The arisen young sprouts were eaten by cows and sheep. The mountain became nude, and people who looked at it thought that there was never a forest. The same happens to a man...». Meng-tzu also outlines the difficulties of upbringing, saying that «... if someone wants to grow a tree of two girths, he will be able to nurse it. When it comes to one´s own personality, we don´t know how to train it...» [1; 5; 7; 8].

To sum up, we should once again point out the necessity of permanent appeal to the heritage of the past that helps us to comprehend the present and predict future condition of social-ecological relations.

The work is submitted to the International Scientific Conference «Innovative directions in teacher education», India (Goa), 15-26 February, 2012, came to the editorial office оn 13.01.2012.