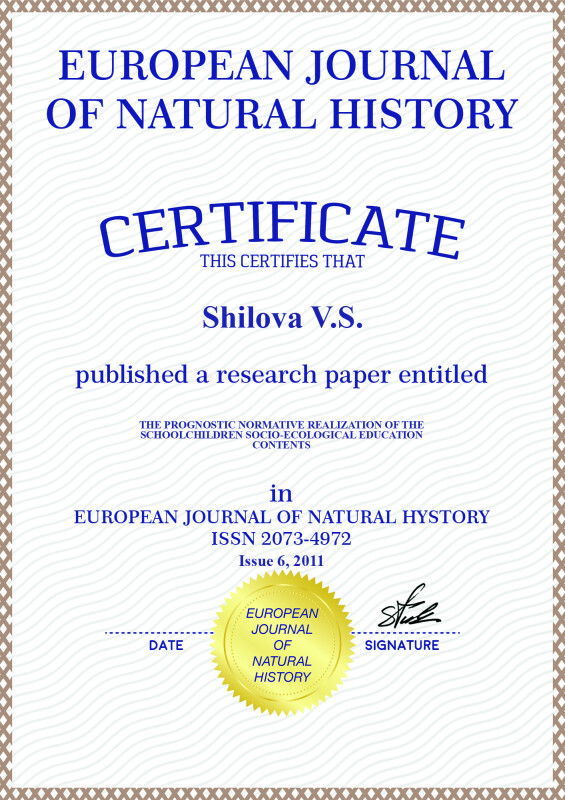 THE PROGNOSTIC NORMATIVE REALIZATION OF THE SCHOOLCHILDREN SOCIO-ECOLOGICAL EDUCATION CONTENTS

In accordance with the RF Law «On the Education» (e.g. 2007) and in the context of the first generation standards (e.g. 1997-1998-es), several curricula and the syllabi are practically used in the educational Institutions and the establishments: the school´s basic one, the master one, and the program one. So, each subsequent curriculum and the syllabus is the logical concretization of the previous one. For all this, the school´s curriculum and its syllabus are presented by the both types: properly syllabus and the detailed working curriculum, having developed, with due regard for the specific conditions. Then, the federal, the regional - nationally and the school components are singled out in all these curricula and the syllabi; the invariant and the variative parts are being developed [1; 4]. The second generation general education standards (2008-2009-es) are provided, first of all, the Fundamental core curriculum and the education contents creation, then the school subject and the academic areas conceptions, the planned learning outcomes and the training results at the output of the learning stages (e.g. the elementary, the middle, and the high (e.g. the senior secondary) school), the basic training (e.g. educational curriculum), and the sample programs on the school and the academic subjects, and the new generation educational and the training complexes [2; 5].

Due to the fact, that «the society - nature» system is acted, as the current research subject, the consideration in the second generation standards the contents peculiarities and the specific features of the general geographical and the historical education, the tasks solution possibilities establishment of the integrated contents realization of the socio- ecological education are quite necessary. So, the exemplary programs analysis on the school and the academic subjects has been shown such possibilities presence. Thus, ones of the geographical education purposes are acted, firstly, the character, the essence, and the dynamics cognition and the learning of the main natural, the ecological, the socio-economic, the social, the geopolitical and also the other processes, haven taken their place in the Russian geographical space and throughout the world. Secondly, the interaction main peculiarities and the specific features comprehension of the nature and the society at the present stage of its further development, the environmental protection and the rational natural resources importance and the nature management significance, the Russian stable further development and the world strategy realization. So, all these purposes are being realized in the course separate and the individual sections contents, for example, «The Nature and the Human Society» [ibid].

As for the history, then with a view of this school and the academic subject, the society with the nature relations reflection necessity is not formulated, the natural conditions and the resources are considered only, as the society development prerequisites, but not, as one from the most significant factors of the world reconstruction, the struggle for the existence and the last, the present and the future generations development [2; 5]. It was determined at that time, that many social contradictions, the local conflicts, the hotbeds, the world wars had been conditioned by the necessity in the natural and the human resources; the population way of life and the civilizations development level is also determined by the resource - naturally potential of the specific territory; who possesses the natural resources - he has the real power [6; 7].

Unfortunately, the connections with the geography are being formed too weak in the program by the history of the second generation standard (e.g. as well as, the first one), that it is not quite permitted to be formed the integral presentation on the «Society - Nature» system, on the interaction and its elements interdependence. And, today, the integrated courses development necessity is being preserved, having revealed the socio-ecological relations peculiarities and the specific features; their place definition in the school and the academic subjects system, the special training and the preparation, and the pedagogical staffs retraining [2; 5].

Having taken into account the above - mentioned material, the school exemplary working curriculum and the syllabus with the socio-ecological component has been developed by us. Thus, the following criteria have been considered in the process of its development:

So, the first requirement was being carried out, proceeding from the schoolchildren socio-ecological education contents sources, and also, in accordance with the basic educational (e.g. training and instructional) curriculum. The specific objects of the socio-ecological environment and the main types of its elements interactions have already been defined the specific list of the school, the educational, and the academic disciplines, having revealed the SSEE contents. So, the construction sources of one from the possible model curricula and the typical syllabi have already been presented by the reality actual objects: by the nature, by the technique, by the man, and at last, by the society. The general educational objects domains are being formed, in accordance with them, having included in themselves the natural, the technical, the anthropological, and the sociological disciplines.

So, the exemplary basic curriculum and the syllabus with the integrated component have been presented by the invariant part, which is included the following educational fields: the Russian language, as the State one, the languages, the mathematics, and the physical culture. The integrated part in this curriculum and the syllabus - the socio-ecological one - is reflected the environmental main elements interaction (e.g. the nature - the technique - the man - the society). The hours´ number is distributed, in accordance with the standards. At the same time, the socio-ecological field should be given the maximum hours´ number, having conditioned by the contents complex multicomponent character. The hours´ redistribution possibility is appeared, at the expense of the subject fields´ integration, in accordance with the specific conditions of the educational Institution.

The basic educational (e.g. training and instructional) curriculum, as it has already been above - noted, is acted, the model and the working curricula and the syllabi construction basis. Due to the fact, that the integrated courses, having revealed some aspects of the socio-ecological interaction, are found themselves, at present, at the development stage, so, all these curricula and the syllabi are being formed on the available objective basis. So, all these courses introduction necessity into the curricula and the syllabi is conditioned by the society objective necessity in the socio-ecological interaction detection, and, on this basis, the causes´ identification, having arisen the universal human challenges, the resolving their ways finding out, as in the present, well as in future.

In accordance with the suggested option in the V-VI-th grades of the part - time (primary) school, the developing socio-ecological field «The Nature and the Civilization» (e.g. «The Nature and the Ancient Civilizations» - the 5-th grade; «The Nature and the Society in the Middle Ages» - the 6-th grade) is acted presumably, as the integrated component. So, the specialization and the advanced and the in - depth study of the individual courses in history and geography are carried out in the VII, VIII, IX-th grades. Then, the nature, the society, and the culture interaction is continued to be considered in the «The Social Ecology» course (e.g. the IX-XI-th grades). The other school and the academic subjects, having included into the considered curriculum and the syllabus, are being ecologized, in accordance with the subject contents.

Having summarized, we note, that the basic curricula and the working syllabi of the schoolchildren socio-ecological education, suggested by us, are the prognostic options, and they are needed the further research of their contents, the realization conditions definition, the necessary methodical - educationally basis creation.

The work is submitted to the International Scientific Conference «Strategy of scientific education», Egypt, 22-27 February, 2012, came to the editorial office оn 13.12.2011.