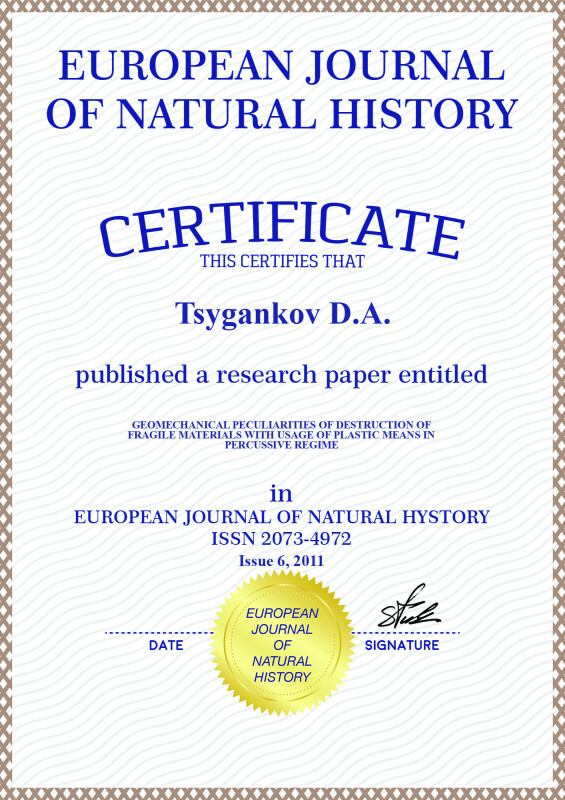 Based on the analysis of features of natural stone, as well as the condition of problem of geomechanical provision for its processing, the author of this report came to the following conclusions:

As a result of theoretical and experimental circle of research on definition of legislations of formation of crazing that is received in fragile materials under the impact of plastic substance from a blast hole and definition of legislations of plastic substance spreading inside a crazing, formed by its ousting from the blast hole, we have concluded that:

One of the main stages of the work is the study of the development nature of a crazing that is formed along and across a blast hole axes, from which plastic substance is ousted. As a result of the research we have established that along with increase in its size, the shape of the longitudinal crazing evolves from an ellipse to a circle, and transversal crazing has more expressed circular character and is almost independent from its further size increase.

According to the research, unlike fluids, plastic substances does not fill the formed crazing completely, thus making a «free area» between the line of a crazing and the line of the filling plastic substance. The further study has shown that the distance between the crazing line and the filling line depends on the regime of charging, consumption, and rheological features, as well as physical-mechanical features of the destroyed rock.

As the result of laboratory experiments we have concluded that in order to form a crazing of the right shape with even surfaces it is necessary to provide for permanent consumption of plastic substance during its ousting from a blast hole into the crazing of low extent (up to 150 mm3/s). Additionally, under laboratory tests on organic glass blocks we have found out that plastic substance, placed in a crazing under dynamic charging, accumulates pressure. This pressure can be hold in it for several days and serve as a cause of further spontaneous destruction of samples.

In has been established that in case of outer loading over the destroyed sample (presence of mining pressure), the primary crazing growth is observed along the direction of this loading, and the distance between the crazing line and the filling line increase independently from the loading direction and its presence.

As the result of a circle of theoretical and experimental research on definition of legislations that link a blowing energy to the parameters of the formed crazing and plastic substance in it, we have established that:

As follows from the bibliography analysis, carried out by the author, the most perspective is the breaking of blocks of size 2-2,8 m wide and 1,2-1,7 m high. For that it is necessary to plan sizes of blocks as equal or even to these numbers. Besides, to achieve an optimal weight (60 tonnes) it is necessary to evaluate the required block length according to the provided sizes of length and width, and also consider a blowing tool that can form crazings of the required size with usage of plastic substances.

As the result of the experiment series it has been found out that an increase in blowing energy of a tool under the same correlation between blast hole diameter and depth, but with alteration of plastic substances and destroyed materials leads to an increase in number of fractions that are formed during the break-off.

As pressure spreading in plastic substance goes on with a decreasing dependence, a possibility of start and extension of a process of further across crazing development, formed at the level of blast hole stall, will be linked to the necessity to use a tool with greater blowing energy, compared to the longitudinal crazing that is formed sequentially along the blast hole length, starting with its mouth.

Therefore, tools that have lower frequency with the same blowing energy should be selected as the pressure that is accumulated in plastic substance and lags to spread (decrease), resists to the transition of new pressure and, therefore, prevents further destruction of fragile material.

The work is submitted to the International Scientific Conference «Priorities for Science, Technology and Innovation», Italy (Rome-Florence), 10-17 April, 2012, came to the editorial office оn 13.01.2012.