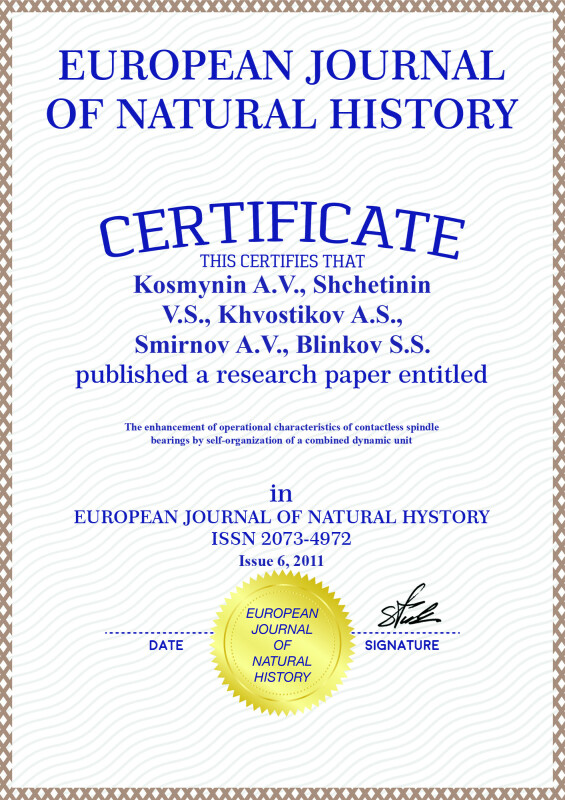 Modernization of any country requires implementing of innovative engineering solutions in industry. One of them is creation of highly productive precision equipment, including metal-working machines.

It is known that in the process of edge cutting machining spindle blocks (SBs) stand for 80 % of accuracy in details production. Thus, the enhancement of this block construction is one of the main tasks in modern machine-tool industry.

Rotating accuracy and spindle speed, which are among major characteristics of SBs, are closely connected with the type of bearing applied. Here belongs the variety of bearings from rolling bearing to electromagnetic, hydro- and gas-static ones. It must be noticed that evolution of bearings application in SBs corresponds to the dynamism of technics development: one joint - many joints - flexible substance - liquid - gas - field. It should also be highlighted that all the bearings mentioned are not capable of meeting all the requirements to current SBs. It was scientifically proved in Work [7], where a detailed analysis of SB efficiency on different types of bearings was given.

All the bearings have a dynamic unit. For instance, a rolling bearing has a hydrodynamic layer of lubricant, a gas-static bearing - a gas film, and an electromagnetic bearing - a magnetic field.

In general, a scheme of force interaction between the elements of SB bearing can be shown as in Fig. 1.

Fig. 1. A scheme of force interaction between the elements of a bearing

In high speed SBs rolling, gas-static and electromagnetic bearings are applied. Hydrostatic bearings for high speeds of spindle rotation are not used because of big losses during friction in the layers of lubricating liquid.

Recently the highest parameter of speed dn = 1,8 million mm/min has been achieved using hollow ceramic rolling element and high quality rolling paths. Though rolling bearings have a limited resource of operation due to a limited quantity of loading cycles.

The most perspective bearings for high speed SBs are gas-static and electromagnetic ones. As it was stated above, the dynamic unit of electromagnetic bearings is a magnetic field that gives an effect of attraction [1]. On decreasing of radial clearance in the bearing the force of attraction increases with a quadratic dependence. Thus, a magnetic field without external action is not stable.

In comparison with electromagnetic bearings gas-static ones has the advantage, because with external action its gas lubricant layer is capable of stabilizing, that is self-organizing. Besides, gas-static bearings are characterized by almost absolute absence of wear and quite a high stiffness and they have a rather low load-carrying capability of lubricant layer especially with little spindle shift in bearing backing (in eccentricity) [3, 7]. On the whole it leads to undesirable decreasing of the load on to the cutting tool.

The effect of self-organization of a combined dynamic unit of a gas field and magnetic forces allows to increase load-carrying capability of a bearing up to 50 % in the range of working values of eccentricity and twice as much with little eccentricities. As theoretical and experimental research proves, this mode of bearing operation in SBs can be reasonably used in superprecision machining of articles.

In conclusion it should be underlined that one of the perspective resources of further enhancement of operational characteristics of SBs is external regulation of self-organizing dynamic unit of gas-magnetic bearing.