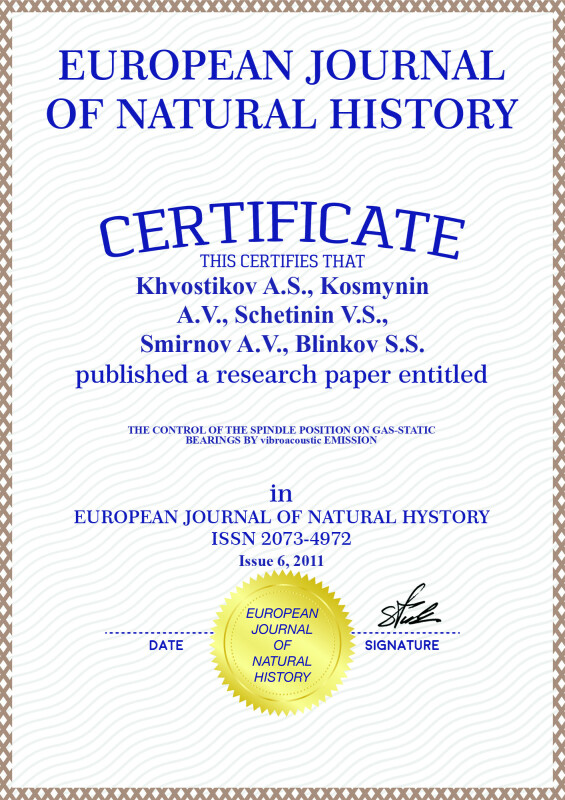 Article in PDF
530 KB
The technique of controlling the spindle position on gas-static bearings by vibroacoustic emission is stated. The description of the experimental test bench and measuring equipment is given.

According to the research on estimating different factors influence on machining accuracy, it is determined by the spindle block (SB) up to 80 %. As spindle and spindle bearings effect shaping motion, it is they that make a decisive contribution into accuracy output characteristics [1]. In this connection, one of the main problems in estimating SB operation effectiveness is monitoring spindle rotation accuracy.

SB operation on rolling-contact bearings is accompanied by an unstable path of the spindle motion, thermal shifts of spindle blocks, periodic change of bearings hardness. It is connected with changing the rotation angle of the separator with a set of rolling elements. SBs on gas-static bearings used when subjected to critical parts precision machining lack such drawbacks. In this connection, it is very important to control the spindle position during operation to further determine its best work conditions.

When machine tool systems are diagnosed, we can not often install a recording sensor in the place where a signal occurs. There is no opportunity to use a recording sensor when determining the spindle position on a gas-static bearing either as it is impossible to mount the measuring element directly on the spindle. The closest place of a measuring element position is the spindle housing. If we move away from the recording place, according to Abbe principle, measurements error increases in quadratic dependence.

The place of recording VAE signal has a very great impact on the accuracy of the decision made. The impossibility of installing a measuring element in the place where the signal occurs causes a noise term. The signal is usually cleaned by frequency filtering with cutting low-frequency oscillations off, without revealing the nature of the signal. In classical methods of VAE signals processing, Fourier expansion is applied. The main drawbacks of Fourier expansion are as follows. Firstly, such a function as sinusoid used in Fourier analysis is harmonic. That is why it causes a great error during the analysis as the analyzed signal is a damped function. Secondly, in Fourier analysis, there is a frequencies diffusion in Fourier spectrum that has a negative effect on accuracy. That is why, for processing VAE signal, it is more correct to use wavelet analysis. Compared to Fourier expansion, it also has the advantage of a weak response to noise terms.

It is estimated that the most qualitative VAE signal cleaning is done by a severe threshold processing of the wavelet analysis. It consists in the fact that we subtract previously defined threshold from wavelet coefficients.

where а, b - data determining scale and

Integration is done along the whole number axis forming family by expansions and shifts.

The research on controlling the position of the spindle mounted on gas-static bearings is done on the experimental test bench shown in fig. 1.

When the spindle position is controlled, signals are registered by sensors attached to the analyzed bearing housing in mutually perpendicular directions. VAE signal registered by piezoelectric sensors gets through the oscillograph to the DAB where analog-to-digital conversion occurs. After that, the signal gets to the computer memory for processing. Using analog oscillograph allows to amplify the registered signal as amplitude scope is small. The computer cleans the signal by wavelet transform and reconstructs the attractor. That allows to get the path of the spindle center line along one coordinate value.

The path of the spindle center line in relative coordinates with the speed of 30000 min-1 is shown in fig. 2.

The path of the spindle center line in absolute coordinates is shown in fig. 3.

In this figure, you can see that in a gas-static bearing, the spindle rotation path is elliptic. The elliptic path of the spindle synchronous rotation with constant velocity can be explained by varying dynamic rigidity (irregularity of pressure profile) on the bearing circle. The line of the path is smooth and practically with no blur. It means that the spindle center line follows a fixed path gaining a stable position in bearings.

A real path of the spindle center line can be obtained with accuracy sufficient for effective control by using such a special high-precision equipment for direct measurements as laser interferometer. It is natural that the use of such a complex and expensive equipment in systems controlling the operation of metal-cutting lathes is economically unreasonable because of too high costs for adjustment and maintenance. That is why less accurate methods are, as a rule, used to measure fluctuations. VAE method is most widely adopted in diagnosing machine tool systems. Together with the wavelet cleaning method, it allows to obtain accuracy comparable to the results of laser interferometry and can, therefore, be effectively used in automation industry.

Fig. 3. Path of the spindle center line in absolute coordinates