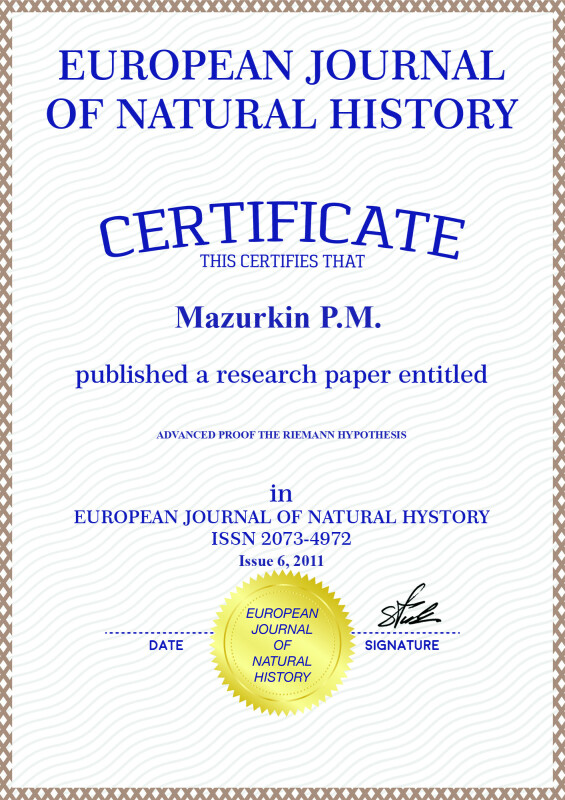 Article in PDF
1452 KB
In the proof of the correctness of the Riemann hypothesis held strong Godel’s incompleteness theorem. In keeping with the ideas of Polya and Hadamard’s mathematical inventions, we decided to go beyond the modern achievements of the Gauss law of prime numbers and Riemann transformations in the complex numbers, knowing that at equipotent prime natural numbers will be sufficient mathematical transformations in real numbers. In simple numbers on the top left corner of the incidence matrix blocks are of the frame. When they move, a jump of the prime rate. Capacity of a number of prime numbers can be controlled by a frame, and they will be more reliable digits. In the column i = 1 there is only one non-trivial zero on j = (0, ∞). By the implicit Gaussian «normal» distribution , where Pj – a number of prime numbers with the order-rank j. On the critical line of the formula for prime numbers . By «the famous Riemann hypothesis is that the real part of the root is always exactly equal to 1/2» is obtained – the vibration frequency of a series of prime numbers is equal π/2, and the shift of the wave – π/4. Montgomery and Dyson gave the average frequency of occurrences of zeros. But it turns out, it is different and functionally related to the number of spaces π=3,14159... In 1972, Montgomery showed oscillatory nature of the arrangement of zeros on the critical line. We saw that they (and 1) really varies.

While working on the proof of the correctness of the Riemann hypothesis held strong Godel´s incompleteness theorem: «The logical completeness (or incompleteness) of any system of axioms cannot be proved within this system. For its proof or refutation of the required additional axioms (strengthening of the system)».

Table 1 shows the symmetrical geometric patterns, but their analysis we did not. It is seen that any prime number before itself has a ratio of 1/2. But it is a sum of terms is not included. Complex mathematical expressions, the parameters of the series has the form:

Mathematical «landscape». In the film «De Code» (19.07; 26.07 and 02.08.2011) showed a three-dimensional picture of the Riemann zeta function. All pay attention to the nontrivial zeros on the critical line. They are already counted several trillion.

Alignment of the binary system is infinitely high «mountain» transforms into ledges of identical height, equal to unity. Fig. 1 shows the landscape of the 24 first prime numbers.

Benchmarks. They are on the upper left corner blocks of prime numbers. It was during the transition to them occurs a jump increase in prime. Therefore, power series of prime numbers is quite possible to manage with the help of a benchmarks, they will be safer decimal digits.

From table 1, we write the nodal values NR (tab. 2) and other parameters of benchmarks.

Then the prime number 2 is a critical and noncritical series begins with 3.

On the critical line is the formula

Completed (fig. 3) evidence of «the famous Riemann hypothesis about that the real part of the root is always exactly equal to 1/2». The frequency of oscillation is equal π/2, and the shift - π/4.

Fig. 4. Graphs of the distribution of the binary components of prime numbers

Montgomery and Dyson applied statistical physical methods of the analysis of distributions with respect to a number of primes and determined the average frequency of occurrences of zeros.

From the remains of up to 0,25 for the fourth level was obtained (fig. 4) model

For the fifth and sixth digits (fig. 5) were obtained regularities:

It is noticeable that with increasing level binary system balances (absolute error) increases. This can be seen in the graphs to reduce the correlation coefficient. In 1972 Montgomery proved nature of the distribution of the zeros on the critical line. From formulas (6) and other shows that they (and 1) is indeed fluctuate. We explain the desire of prime numbers, as well as convert them to binary 0 and 1, diverge from each other because of the power produced in the progression P´j = 2 ijmax-1. A nontrivial zeros of scatter in the plane (i, j) in laws (3) for summand

For the seventh and eighth categories (fig. 6) formulas of a similar design are received:

For the ninth and tenth digits have produced similar pattern:

Fig. 5. Graphs of the distribution of the binary components of prime numbers

Fig. 6. Graphs of the distribution of the binary components of prime numbers

For 1 and 2 categories (fig. 7) on unbroken trivial zeros of the verticals are:

- the law of the Laplace (in physics - Mandelbrot);

Fig. 7. Schedules of distribution of binary number at components of a gain of simple numbers

The critical line i p j = 2 has received the unequivocal formula, and without wave shift.

The famous Riemann hypothesis is proved. For this was accomplished the transformation of a number of prime numbers from decimal notation to binary. We obtain four new criteria. There were geometric patterns. Became visible «on the floor» non-trivial zeros and appeared units «on the ceiling» of the distribution of 0 and 1 instead of abrupt «hills» of zeta-function.