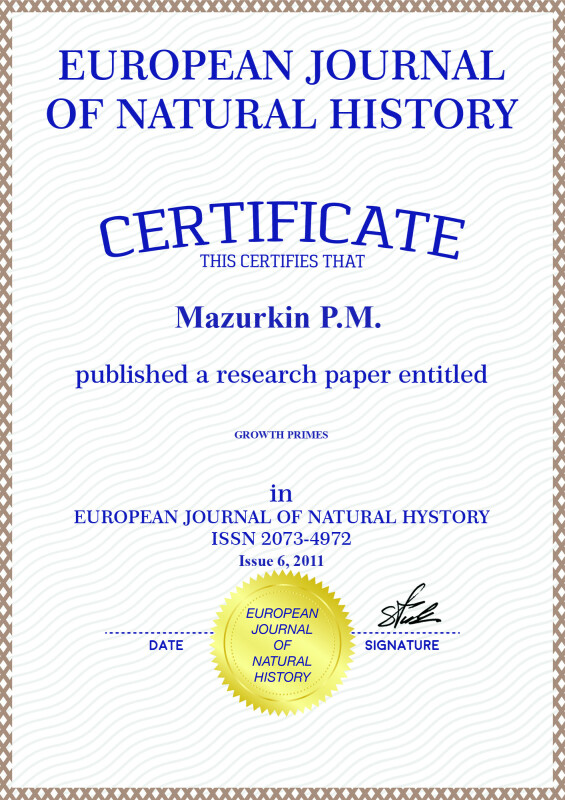 Article in PDF
1161 KB
The growth of prime numbers was a clear indication. Increase – the number increases, the addition of something. If the number of prime numbers, figuratively called the «ladder of Gauss-Riemann», the increase may well be likened to the steps, separated from the ladder itself. We prove that the law is obeyed in the critical line i2 = 2 of the second digit binary number system. This functional model was stable and in other quantities of prime numbers (3000 and 100 000). The critical line is the Riemann column i2 = 2 binary matrix of a prime rate. Not all non-trivial zeros lie on it. There is also a line of frames, the initial rate (yields patterns of symmetry) and left the envelope binary number 1. Cryptographers cannot worry: even on the critical line growth of prime numbers contain the irrational number π = 3,14159 ...

Gauss, Riemann, and behind them and other mathematicians carried away by the relative power x/π(x) of prime numbers with a truncated start, represented in dotted decimal notation. In this case, apparently unconsciously, this figure has been expressed with the logarithm of the irrational basis e = 2,71 ..., and thus the transition from ten degrees to its natural logarithm of false identification has occurred. It is the main error of more than 150 years.

Algorithm building a number of prime numbers. He is widely known, has the form

where p(n) - the growth of a prime number; n - the order of (number) of a prime number. The very number of primes is given initially, it is determined by the condition of the indivisibility of the other numbers, except on unit and itself (the latter condition, even excessive).

The fundamental difference of a number of growth of the number of primes is that in the growth (the same number - an abstract measure of the amount), only one column i2 = 2 bit binary numbers is completely filled and critical, and the first class has only zeros for the set a(n) > 2.

Full filling will continue to infinity, therefore, can be considered a proven fact the appearance of the p(n) = 2 at any power a(n).

Mathematical landscape. To construct (fig. 1) we take the example i2 = 1, 2, 3, 4, 5 and delete those rows in which the five columns contains at least one trivial zero.

An indicator is a binary number z2 in the field of real numbers (0, 1).

Critical line. The first line in table 1 will automatically fall out of the set. After that, at any length series of prime numbers the first column i2 = 1 is zero. Then each value increment from right to left starting from zero and ends with the unit. And for the unit as a wave broken lines are only trivial zeros.

Critical start of the series. In table 2 shows the three critical primes.

Fig. 1. The landscape of growth in the number of 500 prime numbers

Together with table 1 critical prime numbers give a full range of prime numbers, which this article is not considered. To accept it, you must:

a) to recognize as simple that number which shares only on unit (zero/zero indefinite);

Further detailed analysis of the growth will fulfill a number of non-critical primes.

Effect of discharge i2. In the software environment of Excel sum over the columns in table 1 (excluding the first line) and get the number of units in the ranks of the binary system.

Model should give the relative values that allow comparison between different series of growth of prime numbers.

After the identification of bio-law [2] was to teach the following conclusions:

- the share of units (fig. 2) lines of the binary matrix of growth of prime numbers

- the proportion of zeros in (fig. 2) lines of the binary matrix of growth of prime numbers

Fig. 2. Share units (left) and zero (right) in the rows of the matrix: - dispersion; - correlation coefficient

In favor of computing the number of units, there are two distinctive features:

Contribution amounts for units of columns (fig. 3) to the total (table 3 773) will be equal

Fig. 3. Schedule the amount of the contribution of units in the columns of table 1

On the critical line i2 = 2 contribution approaching to the square of the golden section.

Influence of growth. The explanatory variable we take the increase of a prime number. Then on the different digits of the binary number system formed their statistical model (tab. 4) type

If we ignore the first and last bits binary system, the closest to a rational number 1/2 on real values is the discharge i2 = 2.

Thus completes the proof of the Riemann hypothesis and remove the message from the Internet: «Here the famous Riemann hypothesis, that the real part of the root is always exactly equal to 1/2, no one has yet proven, although the proof of it would have been for the theory of prime numbers in the highest degree the importance. At the present time, the hypothesis is verified for seven million of the roots». With increasing power of prime numbers equation (7) for the critical line continues, but the graphs such as fig. 4 will be more frequent fluctuations due to higher growth. The growth is growing much more slowly than simple numbers. This will increase the power of the series.

The binary number for non-emergency lines. Then the third category with an increase in power p(n) gets the physical meaning of the formula

On the critical line i2 = 2 indicated this model is stable and the other quantities of prime numbers (fig. 5).

Primary growth. This - the third parameter (the first - a critical line 1/2), giving a picture of the growth rate of prime numbers. Parameter pp(n) for a number of 100 000 prime numbers are shown in table 4, and he compiled the first appearance of the subsequent term. Primary growth is irregular, for example, an increase of 14 comes after 8 and earlier values of 10 and 12.

Various font allocated triangles (patterns of geometry) with sides (with i2 = 1 - non-trivial zeros). Then the harmonious geometrical structures define the algorithm capacity growth, and even prime number.

Line growth varies with the initial constant «deuce», and there will be fluctuations, the trend

The envelope of the line. Increments to the left of the asymptotic lines have trivial zeros. Therefore, taken into account the wave envelope line, which in different places concerns a critical line i2 = 2. This - the fourth parameter of the series. Divide the increase in two parts p(n) =p´(n) = p´´(n).
On the envelope line by line in the table (fig. 6) are located p´(n) = 2 i2max - 1 And in the 0≤p´´(n) = 2 i2max - 1. The trend with unit from the formula with three fluctuations looks like

Fig. 6. The graph of the envelope line growth numbers 500

The critical line Riemann is located in a vertical column i2 = 2 binary matrix of growth of number of simple. Not all non-trivial zeros lie on it. There is also a line of benchmarks, the initial rate and the bending
around.