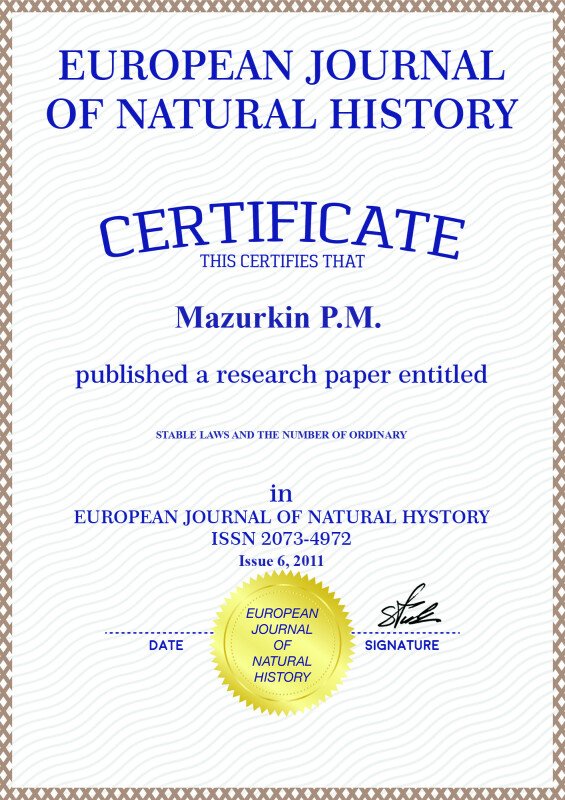 STABLE LAWS AND THE NUMBER OF ORDINARY

There are several variants of distribution or a series of prime numbers (SPN):

The literature focuses on SPN3, and we did not find sufficient publications on the analysis of SPN4 and other ranks have been proposed by us. In this reader a series of five articles examined SPN1, SPN2 SPN5 and compared with evidence SPN3.

In the analysis of stable laws have been applied [3] to the distribution of prime numbers.Biotechnical law and its fragments. Under the scheme «from the simple to the complex structure» in table 1 are all stable laws are used to construct formulas biotech laws. Generalizing formula is biotech law [3]. Most often, the sum of two biotech laws constitutes a deterministic allocation model. Formula, together with a finite set SPN runs in a software environment CurveExpert for parameter identification of a stable law and wave patterns. Table 1 Mathematical constructs in the form of stable laws to build a statistical model

For the processes of behavior of living and/or inert substances (according to V.I. Vernadsky) parameters a, b, c, d biotech law and its fragments may approach to the fundamental physical constants, and it has been shown in the distribution of chemical elements [4]. Power series of prime numbers. According to [1] SPN3 and our calculations on SPN5 in table 2 shows the cardinal numbers and their relationships SPN5/SPN3.

In the first digit decimal numbers the difference between a full and traditional rows of simple number is equal to 150 %. The relative cardinal number is the maximum 100,31 at i10 = 6 and minimum 66,67 at i10 = 1. What SPN better? In advance, we say that SPN5.

Traditional SPN. With the increase in decimal place of natural numbers the increase in the relative cardinal number of the set of prime numbers with a capacity of more than 455 million occurs (fig. 1) by a deterministic model of the law of exponential growth.

Fig. 1. The schedule of the law of exponential growth (1) the relative power and remains after it: S - Dispersion; r - correlation coefficient

The law of exponential death before the cosine function shows half of the amplitude of the oscillatory perturbations of power SPN3. Because of the high value of the remainder for i10 = 1, we have that zero discharge is theoretically possible number of prime numbers must be 88. Combining formulas (1) and (2) gives the binomial model with the wave function of the form

Top of the wave has moved up to 957 prime numbers with zero discharge of the decimal system. In addition, under the function of the cosine of half-cycle fluctuations has changed: the beginning shifted to the first digit of the negative numbers. Half-life increases sharply, and the intensity parameter of death -0,33681 shows anomalous behavior of the model (3).

Full range. This SPN5 received a deterministic pattern (fig. 2) the type of

Fig. 2. Schedule of the law of exponential growth (4) and residues from himt

Residues have a relatively smooth swing and determined by the formula:

In formula (5), half of the amplitude of the perturbations of the power SPN5 has the numerical value of all 0,20751. The initial half-life 8,19322 damped oscillations approaching 8.

The general equation is characterized by binomial formula

Do not change the scale of reference of natural primes. This recommendation for the future in the study of prime numbers comes from the fact that, from Riemann used the natural logarithm and are looking for an empirical formula [1]. To quote from an article by Don Zagier: «Apparently (see table 2), that the ratio of x to π(x) the transition from a given degree of ten to follow all the time increases to about 2,3. Mathematics is recognizable among the 2,3 log 10 (of course, to base e). The result suggested that the , where the sign ~ means that the ratio of their expressions are connected with x tends to 1. This asymptotic equation, first proved in 1896, is now the law of distribution of prime numbers. Gauss, the greatest of mathematicians, discovered this law in the age of fifteen, studying tables of primes contained in the gift to him a year before the table of logarithms».

Equal to the power of two sets SPN3 and SPN5 can be considered, starting with the digits i10 ≥ 9 in decimal notation.

With the growth of x a true statement is the convergence to 1. For this purpose we identify the law of death (in a general form of table 1) according to the statistical data of table 3.

For the full range of the obtained formula

Table 3 The multiplicity of cardinal number

Equation (7) shows that the ratio of cardinal numbers will not come near to the unit and can only reach the values of the 1,0998.

Thus, the transformation ln 10 = 2,302585 ... it was a rough rounded, leading to false identification of physico-mathematical regularities of different series of prime numbers.

With «easy» hands Gauss in mathematics, vigorously developed the theory of approximation, which made it possible to linearize the scale of the abscissa and ordinate in terms of ln x and ln y. Thus is the fundamental transformation of the statistical data presented at the beginning of the decimal system, in logarithmic. As a result, the closed form of design patterns that are not only difficult to understand, but they have lost and the visibility of graphics and even more so - the physical representation. Therefore, we continue to recommend in its publications to readers an open system of mathematical constructs according to the laws of table 1.

Fundamental constants. Formulas from table 1 gives the identification of fundamental physical constants to the parameters a, b, c, d. Processes themselves are unknown.

We put forward a hypothesis (table. 4): with an increase in the relative power of the total number of prime numbers, the parameters of the model (4) will tend to the fundamental constant [5].

Model (9), obtained from the physical constants in table 4, was even more precise on the relative error, and it gives more accurate predictions of the relative power of the set of prime numbers.

Biotechnical law as a supplement to (9) shows that after the discharge i10 = 23 in the relative power is going on a decline. Damped oscillation shows that with increasing power of primes wave x/π(x) tends to zero. When i10 >> 23 the perturbation is almost excluded.

Note. * - In the mathematical environment CurveExpert the possibility of representing irrational numbers.

Fig. 3. Diagrams of the perturbation capacity of prime numbers depending on the order of the decimal system

Power total number of primes from the discharge of the decimal system is identified by the law of exponential growth to the fundamental physical constants. With the growth of the power of the prime numbers increases the adequacy of equation (8) with the physical constants, which can lead in the future to the general equation four interactions.