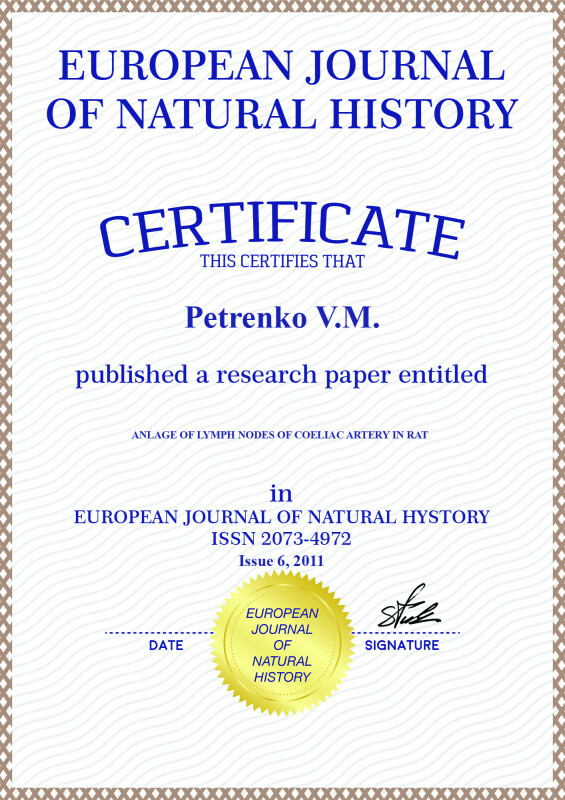 ANLAGE OF LYMPH NODES OF COELIAC ARTERY IN RAT

I study initial development of lymph nodes (LN) in basin of coeliac artery of white rat. In the fetuses of 18-19 days cranial mesenteric artery (CMA) and its branches invaginate into lumen of neighbouring mesenteric lymphatic vessels with formation common anlage of mesenteric LN as stromal tape. It becomes lymphoid tape in the fetuses of 19-20 days. Initial segment of CMA is surrounded by lymphoid tissue likely horseshoe on right, left and caudal sides from the artery, behind pancreas. This «horseshoe» has two branches: the right is short, extends to pancreaticoduodenal artery, the left is long, extends into common root of mesentery and mesocolon. The right branch turns and continues in cranial direct, on the right side of hepatic portal vein - anlage of hepatic LN. This lympoid tape displaces on the dorsal surface of portal vein and to midline, on the right side and cranially from initial segment of coeliac artery, where the tape surrounds hepatic artery. Similar anlage of splenic LN is determined in lumen of lymphatic vessels, along tributaries of hepatic portal vein, on the dorsal surface of tail and on the left side from body of pancreas, at the level of CMA. The dorsal projection of tail of pancreas separates anlage of splenic LN from thick root of dorsal mesentery. The cranially this projection disappears and lymphoid tape passes on the dorsal side of body of pancreas, where it widens and surrounds splenic artery (anlage of pancreatic LN). Then this anlage reaches the midline and gastrosplenic artery, on the dorsal side from the mouth of splenic vein (anlage of gastrosplenic LN). The left, pancreatic lymphoid tape don΄t passes into the right, hepatic lymphoid tape and into the left, but more caudal mesenteric lymphoid tape.

The work is submitted to the International Scientific Conference «Modern Problems of Experimental and Clinical Medicine», Thailand (Pattaya), February, 20-28, 2012, came to the editorial office оn 13.01.2012.