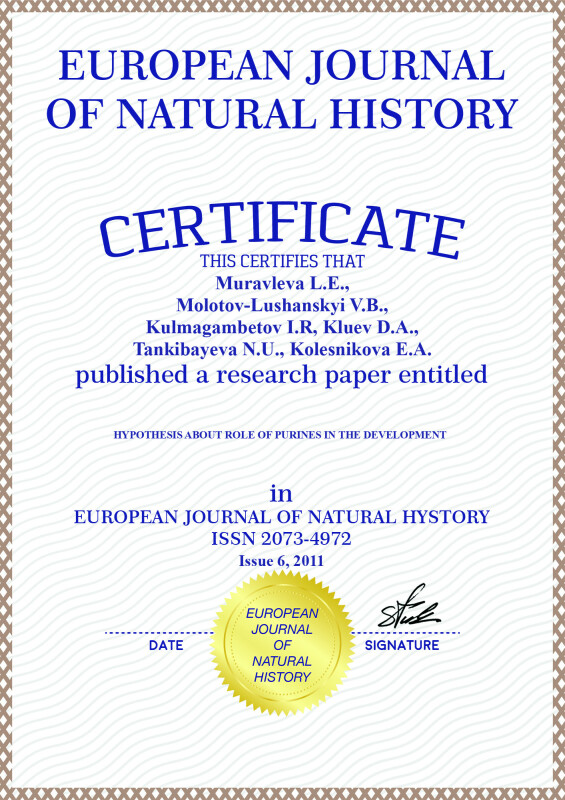 HYPOTHESIS ABOUT ROLE OF PURINES IN THE DEVELOPMENT

One of the promising directions in biomedical research is the study of intermediates of purine metabolism. It is determinated their diverse metabolic functions, including its participation in the regulation of renal function, vascular tone, coagulation, etc.

The aim of our study was to examine the content of intermediates of purine metabolism in patients´ blood with glomerulopathy and tubulopathy associated with arterial hypertension.

The groups of patients with chronic glomerulonephritis (GN) and chronic tubulointerstitial nephritis (IN) were formed. In addition, the patients with arterial hypertension (AH) without renal pathology also tested . A separate group comprised patients with a combination of AH and IN (AH + IN).The diagnosis were based on a complex survey, which included standard methods of patients examination. In some cases, morphological verification of renal pathology carried out. It was estimated the glomerular filtration rate, which all patients reached normal values. Hypertension did not exceed the second degree level. The content of intermediates of purine metabolism (guanine (G), hypoxanthine (HXn), adenine (A), xanthine (Xn) and uric acid (UA) was determined in the blood plasma of patients of investigated groups. Metabolites of purine metabolism were studied by the method of E.V. Oreshnikov and collaborators [1]. The concentration of purine bases was expressed in units of extinction (un. ekst.). Statistical analysis of the data was performed using STATISTICA software package version 7.0, a version recommended for biology and medicine.

Analysis of changes of purine metabolism indicators at patients with GN and IN revealed two trends, and on this basis two clusters were formed (tab. 1).

As can be seen from table 1, the content of all the intermediates of purine metabolism in patients with GN of 1 cluster is much higher than the upper limit of the physiological norm in patients with GN, combined in a second cluster. The content of guanine, hypoxanthine and adenine was nearing the upper limit of the physiological norm in GN patients, combined in the 2 cluster. The only exception was xanthine, which level was higher than control. A similar trend is observed for IN patients. Two trends was also showed on analysis of changes of purine indicators in patients with AH and AH + IN; and on this basis it was formed two clusters (tab. 2).

The intensive decrease of intermediates which were accuracy higher of the physiological norm was fixed in blood plasma at patients with AH + IN united in the 1 cluster In the blood plasma of patients with AH + IN combined in a second cluster, was fixed a sharp increase of intermediates, which significantly were exceeded those of the physiological norm.

In order to pathogenetic interpretation of the detected phenomenon, we propose the following working hypothesis. The increase of catabolic content of purine metabolism can be due to breakage of their capture and transport to the cells, or due to increase their emergency (for example, the destruction of cells). Purine nucleotides accumulate in the extracellular environment in response to metabolic stress and cellular damage, in particular, during hypoxia, ischemia and inflammation. The general sources of adenosine are neutrophils, endothelial cells and microphages [3, 4]. Increasing concentrations of purine bases has an ambiguous effect on metabolic processes in the organisms of patients. Foe example, guanosine has protectional effect against apoptosis of tubules and renal dysfunction. This effect is manifested in the activation of small GTP-ase involved in the function of the cytoskeleton and intracellular transport. Likely, another mechanism as stimulation of the synthesis of nucleic acids also can used [5, 6].

Extracellular adenosine causes a cascade of cellular and tissue responses, which are considered as defensive, to maintaining homeo-
stasis [6]. At the same time, adenosine demonstrates a variety of detrimental properties as induction of cytokine synthesis and modulation function of neutrophils and formation of active oxygen agents[7, 8]. Extracellular adenosine is considered as important mediator of renal function [9, 10] and it influences on regulation of renine secretion. In turn, the dysfunction of the renin-angiotensinogen-angiotensin relationship determines the development of prothrombotic state [11]. Finally, adenosine promotes the initiation of procoagulant phase, induces platelet activation, and it has a vasoconstriction effect [12]. Xanthine and hypoxanthine induce vasoconstriction and damage of the endothelial barrier [13, 14].

Consequently, the excess accumulation of purine nucleotides can be regarded as an independent pathogenic factor of blood cells damage, the development of procoagulant phase, endothelial damage, disruption of metabolic processes in the kidneys, which can be regarded as a condition for the progression of chronic kidney disease (CKD). Currently it was proposed to consider two groups of mechanisms of CKD: nonmodified and modified. The first group includes factors such as age, sex, genetic factors, etc. The second group includes the bases disease activity, hypertension, metabolic disorders and hemocoagulation [15]. Imbalance of purine nucleotides should be considered as a new metabolic «agent of influence», as factor which determines the mechanisms of development and progression of chronic kidney disease. Hypertensive patients observed a decrease of some metabolites content of purine metabolism in blood plasma lower the reference data. In our opinion, this is a key moment determining one of the mechanisms of renal disease in hypertension.

According to modern concepts extracellular adenosine regards the strong regulatory effect on renal function. Thus, in particular, it was shows the role of adenosine in enhancing the glomerular filtration rate in hypoxic conditions [16]. Extracellular adenosine inhibits the activity of matrix metalloproteinase, which are now considered as one of the leading factors of the renal disease formation [17].

As mentioned earlier, in some hypertensive patients was fixed decrease concentration of adenine and uric acid in blood plasma below the physiological norm. Reducing the number of adenine in blood plasma may be due to several mechanisms: a decrease in its formation of nucleotides, increasing the capture cells, recycling through the catabolism or excretion, etc. As previously in all patients with hypertension documented increase of acid-soluble precursors of nucleic acids [18], which are subsequently catabolised to nucleosidmonophosphats, then we can talk about reducing the rate of formation of nucleosides from nucleotides. As already mentioned, our data demonstrate a decrease of extracellular adenosine in the blood of some patients with hypertension. Decrease in the concentration of extracellular adenosine against hypoxic renal tissue (eg, due to increase of blood pressure and compensatory vasoconstriction of glomerular arterioles) reduces GFR, which, in turn, may be one of the triggers of an inflammatory or toxic lesions of the kidneys. Low concentrations of adenosine and other purine catabolits in plasma under rules supported by a system of enzymes that are present both in soluble form and localized to the membranes [16]. Such systems are characterized by strong polymorphism. Therefore, the change of adenosine and purine catabolits in blood plasma of patients with hypertension is determined by individual characteristics of active components of these enzyme systems, catalyzing the formation and further damage. This explains the development of kidney lesions in some patients with arterial hypertension.

Thus, we propose a new predictor of renal disease in hypertension: reduction of adenosine. Excessive accumulation of purine nucleotides can also be regarded as an independent pathogenic factor determines blood cells damage, the development of procoagulant phase, endothelial damage, disruption of metabolic processes in the kidney that promotes the progression of chronic renal diseases.