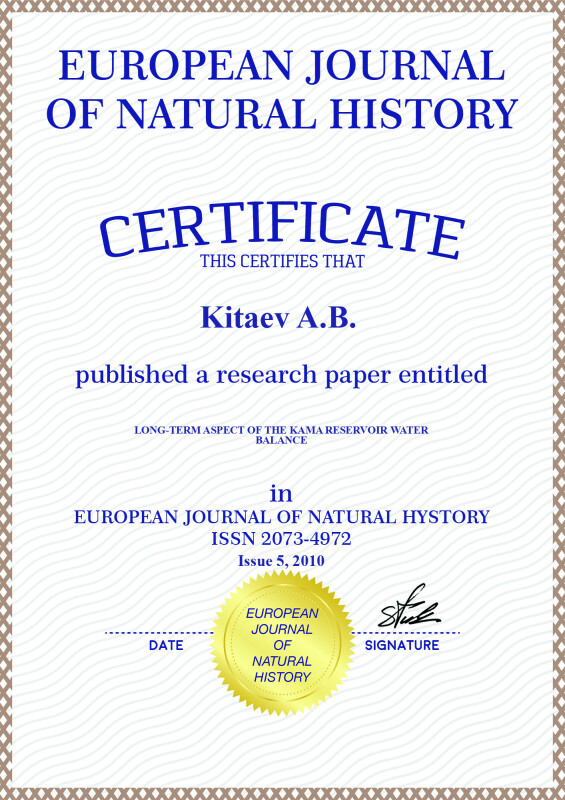 Water balance and concerned with it water exchange define in a greater or lesser degree all elements of a regime of natural and artificial reservoirs. Since level fluctuations are connected with change of water balance elements it has affect on variance of morphometric characteristics. Although water balance of reservoirs is identical in structure with water balance of lakes it differ a number of specific features in a behavior and proportion of input and output elements. Singularity water balance of reservoir is caused first of all by repercussions of complex interaction between natural and anthropogenesis factors. Anthropogenesis factors define nature of water input and water output in reservoirs with cascade of hydroelectric power stations.

For the first time the average of mean annual sizes of water balance elements for a long term for the Kama Reservoir was defined by V.I.Ponomarev, E.A.Snegirev, L.I.Ponomareva in Recurs Poverkhnostnyx Void SSSR (part 2) (Recourses of a Surface Water of the USSR). The information from 1956 to 1967 had been generalized by the authors.

Above mentioned differences are first of all connected with allowance of new components of balance for a long period (Пc, З, Ш, Ф) and also with more precise determination of size water evacuation through tailrace structure.

Research of water balance components of the Kama Reservoir (1956-1993) has conclusions:

1) the basic components input parts of the Kama Reservoir balance is a reservoir inflow from the Kama River (53,18% in annual aspect), lateral inflow - 43,03%, meteorological precipitation from reservoir surface - 1,66%, industrial discharge - 1,29%, water from emerged ice and from emerged snow - 0,84%.

The work was submitted to international scientific conference «Wildlife management and preservation of the environment», France (Paris), 15-22 October 2010, came to the editorial office on 30.08.2010.