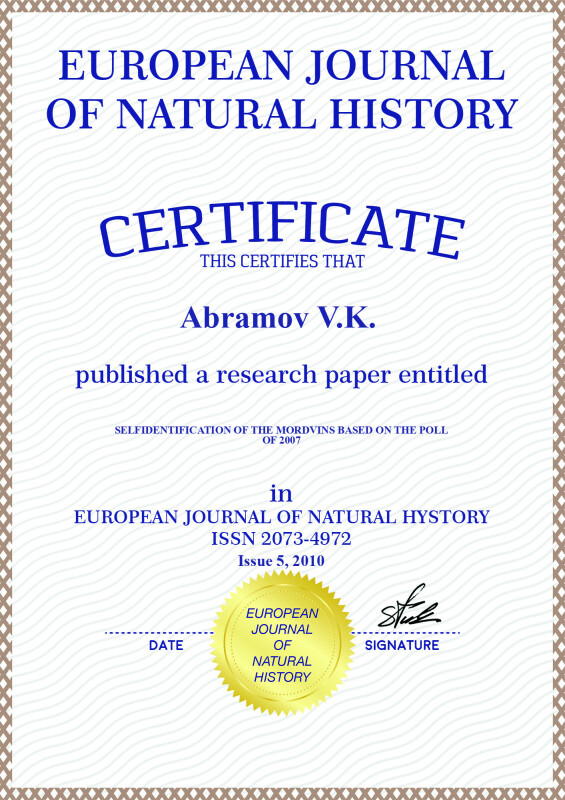 SELFIDENTIFICATION OF THE MORDVINS BASED ON THE POLL OF 2007

At the frames of Finland-Russian project of 2005-2008 years "About the regulations of Finno-Ugric nations of Russia", there was carried out the poll of population of 13 regions of Russia by the whole number of problems, including the problem of definition of the nationality. While this all questioned Russians, Tatars and others called their nationality equally: Russian (woman), Tatar (women), Chuvash (woman) etc. Some alternative versions had Maris: "Mariec (Mariika) or Mari. The biggest variety had the answers of Mordvins. Women had 13 types of answering: Marostava, Moksha, Mokshanka, Mordvin, Mordvin-Moksha, Mordvin-Erzya, Mordvinian, Mordvinian-Moksha, Mordvinian-Erzya, Erzya, Erzya-Mordvinian, Erzya-Mordvinian, Erzyanka (erzya, moksha are subethnoses of Mordvins, marotava word for word is "mother-earth" - V.A.). Men had nine names. It should be mention that generally they are widely spread and this testifies to the full confusion in this sphere. For example, in the Ulianovsk region all 68 of respondents-Mordvins answered that they are "Mordvins, Mordvin women". In the Samara region the base mass of questioned declared that they are "Mordvins, Mordvin women". In Bashkiria among the 35 of respondents 32 of them found themselves "Mordvins, Mordvin women" etc. The biggest confusion is observed at the Republic of Mordovia. Here, speaking about nationality of their mothers, Mordvins 197 times wrote "Mordvin", 88 times "mordvinian", 17 - "Erzya or Erzyanka", 10 - "Moksha or Mokshanka". The mothers of respondents, who called themselves Russian had the term "Mordvinian" 42 times, "Mordvin" 38 times etc. It should be noted that these alternative versions doesn´t testify to the presence of some essential, just national differences at the Mordvinian sphere. Thus, from the respondents-Mordvins, which were questioned at the frames of mentioned project, 96,1% classed themselves to the Mordvinian nationality and only 3,9% didn´t mentioned it while answering on this question. That means that the problem consists not in the tendency to the disintegration of united nation, but in the unification of term that reflects its unity. From the norms of Russian language there follow: "Mordvin, Mordvin woman, Mordvins" as the indicators of nationality (by the analogy "Lett, Lett woman, Letts"); "Mordovets, Mordovka, Mordovtsy" as the indicator to the place of living ("Latvian, Latvian woman, Latvians"). But in official documents there are used terms: Moedvin, Mordovka, what confuses this question.

The work was submitted to international scientific conference «Present-day problems of science and education», Moscow, 11-13 May, 2010, came to the editorial office 03.06.2010.