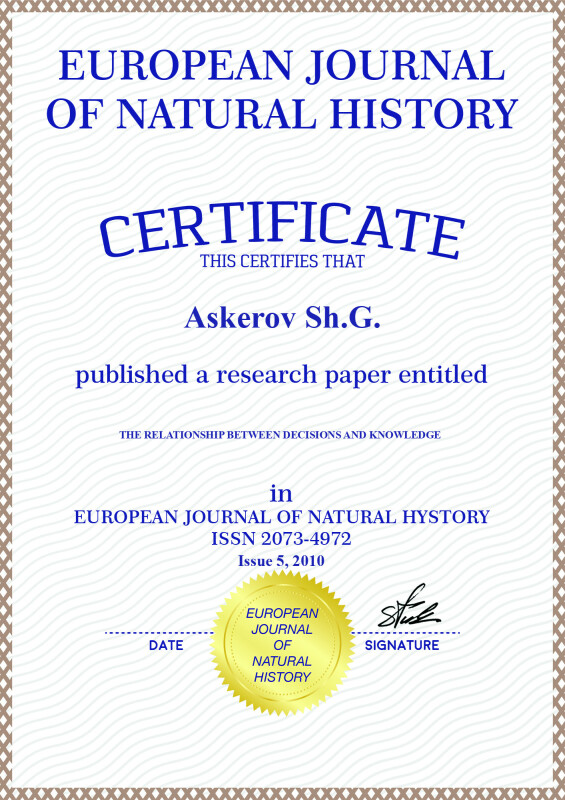 THE RELATIONSHIP BETWEEN DECISIONS AND KNOWLEDGE

The picture of world´s development during last hundred years shows, that side by side with big scientific and technical progress there also occur scale regressions: two world wars, global warming, breach of harmony between economical and spiritual development, wide spread of drug business and of weapons of mass destruction, ecological problems, replacement of more fair social foundations by less fair, presence of double standards etc testify to the presence of considerable shortcomings at the general development of humanity. The truth can´t defeat the lie. The number of problems considerably exceeds probable ways of their solving. All these cataclysms are the result of wrong decisions, which were reached at the global and local level. One of the west thinkers has characterized philosophy of development of last century like this: "when the last tree is cut, when the last fish is caught, when the last river is poisoned, people will understand that money is not edible."

All these undesirable phenomena that have place at the development of humanity indicate that old criterions and measures of values definition lost their power and there is a necessity in new methods of assessment. At one old aphorism saying goes: "there is no bigger happiness than the measure, measure is the base of harmony". If harmony was broken, that means, there are necessary new ideas, models, criterions and measures.

All these deviations from the straight and narrow are implicity connected firstly with insufficient level of scholarship of elite stratum of planet´s population. Secondly with the absence of true methods of value assessment, including assessment of knowledge of students.

Every day each officer (or person) reaches tens of decisions. Per annum the number of such decisions, which are reached by person, averages many thousands. Obviously not all reached decisions are perfectly true, the part of them undoubtedly false. The reason of these mistakes is hidden in shortcomings that occur at the educational systems. Between mistakes, which are made while reaching of decisions at the system of direction and at the system of education, there is interconnection. The aim of this work is to reveal this connection.

Let´s mark the height of full part of glass as Lk, empty part as Ld, and the overall height as Lo. Apparently, these parameters are interconnected:

As the new criterion there was suggested to consider ratio of length of segment Lk to the segment Ld. At previous works this ratio was called the factor of quality and was marked with K letter. There K acts as the new criterion of knowledge assessment, because:

b) in case when К = 1, Lk = Ld, the educational system has the middle condition.

If we divide both of sides of formula (1) to Lk, we´ll receive the formula:

It´s clearly that when:

The meaning of these results consists in that it creates the possibility of creation of interconnection between relative error of reached decision and relative shortcoming of information (ignorance). At the work [3] there was shown that error of decisions is proportional to lack of information:

Here, ∆Q is an error of reached decision, c is the coefficient of proportionality. ∆Q is defined by formula:

Here, Q а is absolutely right decision, Q c is current decision. Obviously, that while the approaching of Q c to Q a, the error of decision ∆Q approach to zero.

For example, if one of the students from 100 questions rightly answered on 98, and other student on 88, then obviously that lack of knowledge fro first student will be 2%, and for second student will be 12%. It´s obviously that error of reached decisions in conditions of big values of knowledge´s lack (12%), accordingly will be considerably bigger as compared with first student.

Thereby we receive that error of reached decision depends on the level of incompetence of individual. To right decisions we can go by means of irreproachable education. In that consists the philosophy of struggle for qualitative education.

I am grateful to associate professor G. Sadygzade for discussion and critical remarks.

This work was submitted to All-Russian scientific conference "Actual questions of science and education", Moscow, 11-13 of May 2010. Came to the editorial office 23.04.2010.