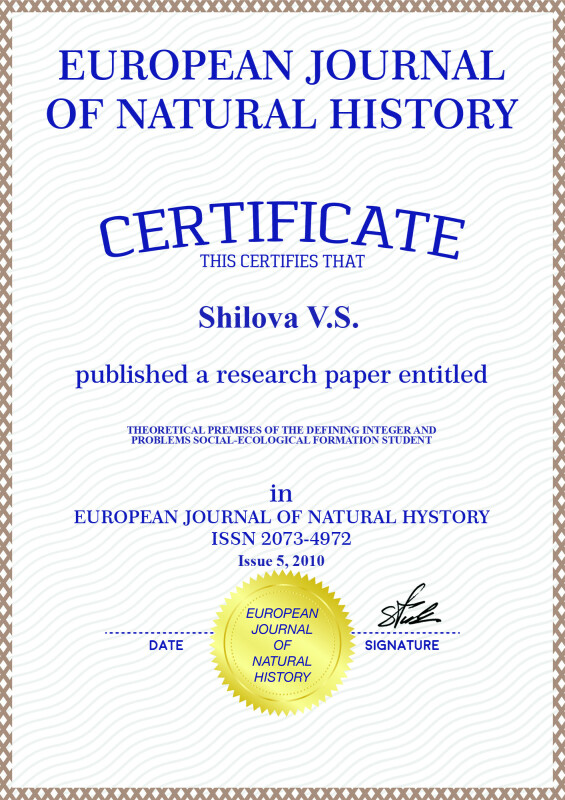 The research of problem of the aims and tasks of socially-ecological education of students requires the revealing of necessary theoretical premises, the formulating and specification of the content of the aims, definition of their levels. The most important formation is this case singles out, firstly, the essence of category of the aim, which is defined in modern scientific knowledge.

Philosophers, for example aim, define as the anticipation in the in the consciousness of result, to the reaching of which there is directed the action; as the motive the aim direct and regulates the action, pierce the practice as the inside law, to which person subordinates to his will. Aim defines the active side of human consciousness, should be in accordance with objective laws, real possibilities of environment and the subject itself (I.T.Frolov). The aim is one of the elements of behavior and conscious activity of person, transformation of environment. It´s objectively conditioned; it´s connected with objective necessities, due to which it singles out as ideal, inherently made motive of production, defines not only law, but way and type of actions of person. The aim is the way of integration of different actions of person to some succession or system, the stimulus to the building of the project of action, which defines the character and system orderliness of different acts and operations (D.M.Gvishyani, N.I.Lapin). Modern western philosophers define the aim through the reasonability; target explanation take the action out of its aim, his goal; target explanation tells us "why" there is occurs the event (D.Julia) [1].

At the psychological scientific literature the category of aim is opened roughly in one channel. Thus, Rubinshtein S.L. connects the aim with the result and motive of activity, separate action; notes that the direct aim of socially organized person´s activity is carrying out of defined social function. Leontiev A.N. names the aim as main forming activity or actions, distinguishing while this the aims of outer practical activity and outer activity; the mean of aim A.N.Leontiev corresponds with the mean of action, at the same time when the mean of motive with the action in whole; aims and motives in activity should not coincide: one motive can cause different aims and from then different actions. While this, A.N.Leontiev noted the objective and conscious character of the aim. The aim singles out as central systemizing component of psychological system of activity and reveals in two cases: firstly, as its ideal and mentally imagined result; secondly as the level of reaching, which person try to achieve (as the task to reach defined indicators) (V.D.Shadrikov) [2]. To the present time there are researched the aims of any different types of activity: professional, labour, playing, scientific, creative etc.

The defined interest for this research is the category of aim, which is opened by pedagogic science. At the psychologically-pedagogical dictionary (1998) the aim of formation supposes anticipated at the thinking results of participation of person (population) at different educational programs. There discern two types: pedagogical, which are directed to the enrichment of sets, understanding, knowledge and skills; social, which suppose the humanization of interests of personality and society, their corresponded progress. Reflecting the functional role of the aim, Babanski U.K. consider it as the initial component of pedagogical activity and pedagogical process itself, connects it (the aim) with the formulating students´ system of different knowledge, skills, abilities, world outlook, active life position of personality, with the development of skills and abilities of educational activity, with the psychology of the process [3].

Some kind of unusual for traditional understanding there is offered a viewpoint of V.A.Slastenina, A.I.Myshenko, who take away the aim from spontaneous frames of pedagogical system, explaining it by the understanding of the aim as the multilevel phenomenon. The aim singles out as premise, and as inside inherent to the content phenomenon; at the means the aim is also present in the obvious and unobvious view, functions at the level of cognition and reveals in activity. The authors especially note that the aim, as the expression of social order of society, is interpreted at the pedagogical terms, singles out as the systemizing factor (not element), that means the outer strength against the pedagogical system. Pedagogical system is organized with the orientation to the aim [4].

The specific analysis of category of aim at the pedagogy, its statement was carried out by E.V.Bondarevskaya and S.V.Kulnevich. As the parameters of their analysis, the authors single out: the idealization and ideologizing of aims, its technocratism, correlation with the means of realization. As the global aim of upbringing authors consider the formation of person of culture. The necessity of selection of the general aim in the work of pedagogue, in the opinion of authors, has principle methodological meaning, because it defines the main direction of his activity. The way while the moving from the general aim to the final result of upbringing supposes the development more particular (functional) aims, their classification and systematization, which in turn can be carried out by different bases, for example: system-component analysis of personality; components of moral development of personality; behavior etc. [5].

At the context of object of our research the necessary is the examination of several target groups: the aims of ecological and socially-ecological education; aims of professional preparation. To nowadays there are rather clear defined the aims of ecological education of pupils (I.D.Zveryev, I.T.Suravegina, A.N.Zahlebnyi and others). In the grounded opinion of Suravegina I.T., the main aim of ecological education of pupils there singles out the formation of ecological responsibility, which supposes, on the one hand, attitude to one´s health, on the other hand, attitude to environment: nature and social. This aim is concretized for each stage of education. Each aim, notes Suravegina I.T., has not only ideological, but also scientifically-cognitive tint, what complicates the process of education and requires from the teacher the further concretization of tasks [6].

What concerns the system of professional preparation, particularly, at the stage of higher education, there is carried out an active search for the aims of ecological and socially-ecological education. Thus, the aims of ecological education of students are connected with ecological imperative at the process of development of civilization and improvement of human (Egorova G.I., Paderina M.A.); with the formation of anthropo-ecological, value consciousness and style of thinking, communication and activity (Pak M.S., Shitova I.F.); with the ecohymanist paradigm (Grudzeva N.V.) etc [7]. A lot of scientists, for example, S.N.Glyazachev, E.A.Kogay, as the aim of ecological education at the system of professional education consider the formation of personality, the nucleus of which there singles out the ecological culture that provides the versatility and harmonicity, integral ideology; overcoming of alienation of personality from the nature and society, ecological orientation in macro- and micro environment. With it, at the ecological culture the authors consider not only the aim of ecological education but also the way to the ecological safety, formulating of qualitatively new culture, which reflects the integrity of world at the base of its practical, intellectual and spiritual understanding [8].

The spontaneous connection between professional and ecological education there establishes N.M. Mamedov, who fairly consider, that in modern conditions scientific knowledge should help the future specialist not only to sort the processes and phenomena of the nature, complicated situations of life, but also act knowingly. The aim of modern education, notes the author, becomes not only digesting of the bases of the sciences, but also the forming of methodological orientations and operational thinking. Defining the aims of preparation of specialist, Mamedov N.M. states to their difficult character, to the necessity of forming of knowledge, skills, abilities, which are necessary for the reaching of such decisions, which don´t break the stability of socecosystems, assist the saving of nature systems, careful attitude to the resources of biosphere. We should agree with Mamedov N.M. at the defining of the aim-ideal, and just - the formation of the ecological person. To approach to this aim there will help, in the opinion of the author, the reaching of strategic aim of ecological education - upbringing of responsibility as the measure of freedom of person in conditions of ecological necessity [9].

Mentioned general aims of ecological education at the system of preparation of specialist don´t contradict the aims of professional education. Thus, Fokin U.G., Novikov A.M. as one of the base aims consider the creation of conditions for the owning of professional activity, reaching of qualification (or requalification) for including the person into a socially helpful labour in correspondence with his interests and abilities [10]. Obviously, that selection of this aims is connected, on the one hand with labour activity, as the process, which is carried out between the society and nature; on the other hand with personal qualities, which promote the establishment of harmonious relations with environment the process of labour, that allows to predict these relations in the near and far future.

Just these values allowed us to formulate corresponding multilevel aims of socially-ecological education of students: strategic, tactical, efficient. Their digesting formulates the position of the personality of student relative to base elements of the environment to the side of harmony, what promotes further stable development of society and state.

The work was submitted to international scientific conference «Prospects for the development of university science», (Sochi), 22-25 September 2010, came to the editorial office on 17.06.2010.