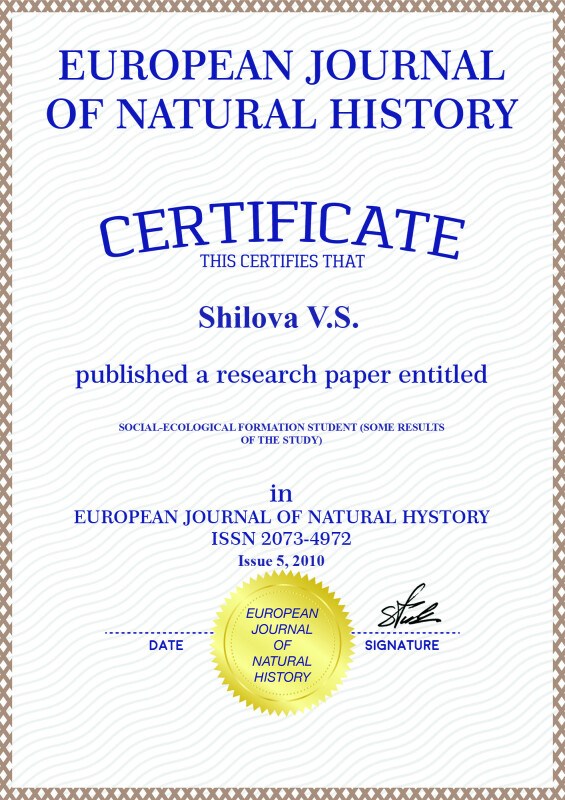 SOCIAL-ECOLOGICAL FORMATION STUDENT (SOME RESULTS OF THE STUDY)

It´s clearly that as the most important element of pedagogical process at the institute of higher education there singles out the contents of education. Just it is a necessary mean of progress of the different level goals of education and training and it also is a program of corresponding activity. The category "the contents of education" reveal by different ways: pedagogically adapted system of knowledge, skills and abilities, experience of creative activity and emotional-volitional relations, which guarantees the forming of comprehensively developed personality that was prepared to the reproduction and development of the society´s culture (I.J. Lerner, M.N. Skatkin and others); the contents of education consists in the bases of sciences, educational standards, social science knowledge, intellectual, labour and other skills and abilities, different types of cognitive activity, the phenomenon of culture, spontaneous participation at different kinds of labour, sporting, social, political and entertaining measures (B.T.Lykhachev, V.A.Slastenin) [1].

At the definition of the essence of the SEES contents as the initial position singled out the essence of contents of social-ecological education of students, which was formulated by us at 1999. We should remind that at the general appearance it consists firstly at the system of knowledge about the interaction of society and human with the natural environment; about the means of this interaction that allow to form the integral picture of the world surrounding the human and to master the system of methods of cognition of real social-ecological reality and practical activity in it. At this system there is included the knowledge of principal objects of the environment: nature, society, human and technology. Secondly the contents includes the system of such intellectual and practical skills and abilities that promote the establishment of real connections with all the elements of the environment and that then became the base of further activity in it. Thirdly the cumulative experience of creative activity that conditioned by the variety of real world and by the necessity of peculiar approaches to its mastering, assistance to further development. Fourthly the experience of emotional-valuation, volitional attitude to the social-ecological reality, to its each element, to oneself. This will guarantee the formation of psychological readiness of personality to the optimal connection with the natural environment, to the conviction of its obligatory saving, to restoration and renewal, to digesting of system of social-ecological values [4].

But formulated definition develops principle regulations of the educational contents, which then are concretized according to the conditions of educational establishment. At the system of higher professional education, in opinion of many specialists (N.F.Talysyna, I.A.Volodarskaya, S.D.Smirnov and others), at the process of development of the contents of the courses it´s necessary to take into consideration following factors: "output" and intermediate aims of university´s education; the presence of three (as the minimum) invariable components of contents: object, logical, psychological, that means special and nonspecial blocks of knowledge, skills, abilities. As the most important condition of selection of contents of higher education N.F.Talysina calls the necessity of separation of fundamental, invariant knowledge. It, in the author´s opinion, allows to draw other particular cases according to singled out factors and main strategy aim of preparation of specialist at modern conditions - formation of human ecological, professional, able to assist to the further steady development of the society; and also the tendencies of ecologization of contents of all degrees of education; construction of the main blocks of contents of social-ecological education of students. In compliance with the viewpoint of Talysina N.F., Smirnov S.D. at our research there are remain obligatory blocks: object, logical, psychological [5]. Other researchers, particularly Deryabo S.D., Yasvin V.A., substantiated single out five substantial blocks at the system of professional preparation of pedagogues to the realization of main ecological education: ecology-theoretical, ecology-humanist, naturalistic, psychology-pedagogical and methodical [6].

It should be noted that the idea of ecologization and pedagogization nowadays is realized at the contents of higher education. The analysis of active educational plans of different specialties, which was carried out by us, showed the degree of such realization. It was established that at the educational plan there is widely presented professional block that reflects the specific of contents of separate specialities, which opens at some educational disciplines; logical and psychological blocks are represented by philosophical and psychological disciplines. What concerns social-ecological block it is reflected unevenly (by its volume) at the structure of educational plans. At the biggest degree there are ecologizated the educational plans of geology-geography faculty, that is connected with the specific of the studying object; at the smallest degree - the educational plans of humanities. With regard to the pedagogical block there is similar tendency: teacher specialities are more pedagogizated, that can be said about other specialities, for example juridical. But recently there is clearly single out the necessity of the filling of contents of higher education with pedagogical disciplines. The example can be the introduction of some of them into contents, for example, medical, geographical, economic education. There were developed by the workers of the cathedra of the pedagogy of Belgorod State University pedagogical courses that are adapted for different spesialities and that connect some profession with the peculiarities of interaction with the people at the frames of chosen speciality (for example, the system "doctor - patient", "administrator - subordinate" etc).

Formulated earlier definition of the essence of social-ecological education of students opens, as it was already mentioned, the most general regulations, which then should be concretized in compliance with the conditions of educational system. The analysis of works of Arkhangeskyi S.I., Talysina N.F., Smirnova S.D. and other scientists allowed to single out typical for the university conditions and to define the essence of the contents of social-ecological education of students. This essence is probably consists in the system of knowledge, skills, abilities, creative and emotional-valuable attitude that reflect naturally-scientific, anthropological, technically-technological, social and psychologically-pedagogical aspects of the interaction of personality with the natural environment. Singled out system of contents is conditioned by the objectively existed system "nature-society" (or "nature-human-technic-society") (N.M.Mamedov, A.D.Ursul, V.D.Komarov and others)(7).

In consideration of the opinion of N.F.Talysina, who fairly insists on the the necessity of separation of fundamental obligatory knowledge, the place of content of SEES at the contents of higher education stands at the system of interdisciplinary (various) blocks, at the composition of which there are included: ecological and pedagogical blocks, and at the same time at the composition of basic (invariant) components there are included: logical, psychological and object blocks. All blocks (invariant and variant) are connected together, that is conditioned in the final by the objective law of the universal connection of objects, processes and phenomenon of actual reality and by their reflection at different forms of social mind.

And with it there arises the necessity of solving the other task at the context of the problem of the contents of social-ecological education of students - the definition of the corresponded object field. On the assumption of that SEES reflects objectively existed elements of social-ecological system - "nature-haman-technic-society", that it´s logically to suppose that object field should be consisted with science disciplines that reflect tis elements. As such disciplines we label: naturally-scientific, which open nature at all its variety (geology, geography, physic, chemistry, biology, mathematics and other); anthropological (biology, medicine, physiology of human and other); technical (technic and technic of production and other); sociological (philosophy, sociology, history and other); objects of psychology-pedagogical cycle. Each of disciplines singles out as the source of the development of complicated integrated social-ecological contents that opens at the base of the connection between blocks.

That is to say the contents of SEES includes natural-science, anthropological, technically-technological, sociological, psychologically-pedagogical blocks, the possibility of integration of which is presented at the course of social ecology, oter integrated courses. It should be noted that the presence of these blocks at the contents of modern higher education is reflected at the active educational plans of different specialities. Their analysis showed that each of blocks separately is rather fully presented almost at every speciality, except some philological, juridical, social-psychological. And with it each of blocks present itself rather independent discipline, almost isn´t connected to other blocks. It does not allow to solve problems of formation of complicated social-ecological knowledge, skills and abilities, experience of creative and emotional-volitional attitude to nature that require integrative base. From here appear the necessity of further search of conditions that promote not only development of complicated contents SEES, but also its formation at the university.

The work is submitted to Scientific Conference "The Problems of International Integration of Educational Standards", England (London) - France (Paris), 23 April - 1 May, 2010. Came to the editorial office on 06.04.2010.