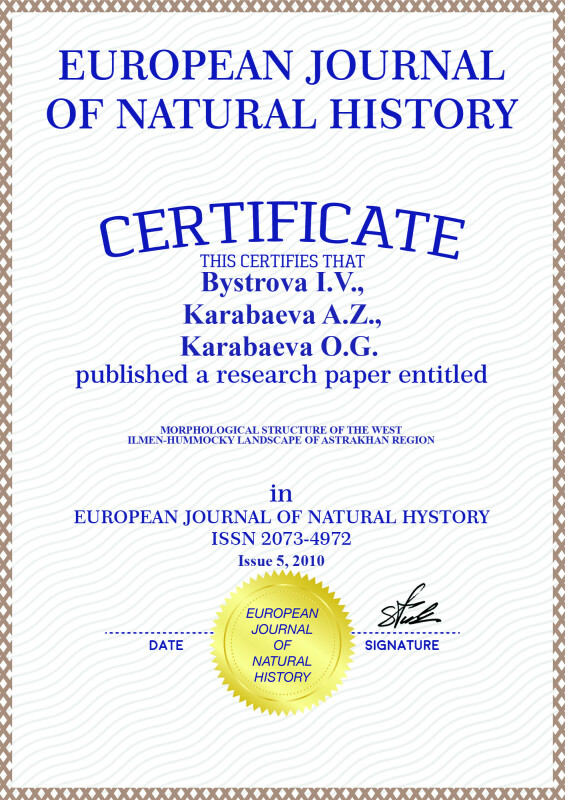 MORPHOLOGICAL STRUCTURE OF THE WEST ILMEN-HUMMOCKY LANDSCAPE OF ASTRAKHAN REGION

Since olden times the vital functions of population of lands near Caspian Sea is connected with water, that´s why study of water resources is actual nowadays - at the century of high technologies. The development of society leaded to the considerable changes of nature of Volga lower reaches, what is conditioned by the number of factors. But the most important is the increase of anthropogenic load to all components of natural landscape of West ilmen-hummocky district, what is base reason for carrying out by the authors the complex researches.

West ilmen-hummocky district is a unique natural complex, which combines interesting hydrological and geomorphologic objects, which are the object of research, situated at the territory of Narimanovsk and Ikryaninsk administrative districts of Astrakhan region.

During last decades, as our researches, which were carried out at this territory, showed, that the majority of the elements of the landscape ilmen-hummocky district are in unsatisfactory ecological condition. It´s conditioned by the intensive development of economic activity and number of natural factors. Meanwhile the scales of anthropogenic influence are so, that they lead to the breach of the integrity of separate components of landscapes, weakening of their potential possibilities to the self-repair, and also here and there to their full disappearance (separate ilmens, hummocks, erics etc).

The object of research is landscapes of West ilmen-hummocky district of Astrakhan region.

The aim of out researches is complex studying of separate components of landscape of this region.

At the territory of studying district there clearly single out three types of holes [1]: eluvial-hummocky, between the hummocks and ilmen.

All eluvial-hummocky holes are oriented in the sublatitudinal direction. Their absolute marks vary from the minus 3,8 m to minus 15,8 m. The configuration of holes of this type is clear in the plan slightly sinuous. Relative height reaches 5-15 m, square varies at limit from 46 to 150 m.

These holes of hummocks were formed by the different-age rocks of sedimentary origin. Rocks have in their composition organic and inorganic debris. First are represented by scanty small debris of shells of sea mollusks, second are represented by the debris of gypsum, pellet of metamorphic rocks, inclusions of manganese and efflorescences of different readily soluble salts. For occurring layers there is character the fast change as by vertical line, thus by horizontal line. The soil at the limits of this type of holes is brown, they are poor of humus and mineral compound.

Between the separate holes there are no clear border observed. The passage to the between the hummocks depression and ilmens is gradual and smooth.

Fcies in the composition of hummocks´ hole have identical geological, lithologic, mineral and organic compound.

The holes of between the hummock depressions are formed by the rocks of sedimentary origin and exceeded by modern lake-liman sedimentations. At the lithologic approach they are represented by sandy-loam or loamy differences.

The soil at the limits of these holes are ilmen-meadow, well moistened with the developed humic horizont with the facility till 20 sm. Here and there there are met salted places. The type of vegetation depends from the degree of their salinization and moisturizing.

Between the hummocks depressions full of water are called ilmens (local name). Holes of ilmens are oriented as the hummocks in sublatitudinal direction. The configuration of ilmens in the plan is sinuous. It´s length is 0,7-2,0 km, width 25-250 m, relative depth 0,5-1,5 m. Bottoms are flat or slightly concaved, slopes are gentle. The square, which is occupied by holes of this type at the limits of researched lot, is 34-36% from the general square of district. The character of the borders of ilmens is clear and observed by the decrease of moisturizing of the soil, change of their colour, compound, change of the character of vegetable cover.

At the limits of holes of this type we single out two facies: mirror of the water and near ilmen.

Facies - the mirror of the water or ilmen itself are situated in the dished pricks. The water in them is fresh or slightly salt. The degree of its saltness depends on the presence or absence of connections of facies of this type between each other or Volga river and the character of their connections.

This facies is sharply (on the waterside line) pass to the next one - near ilmen. Such facies more often broadens with the facies of the slopes of hummock and the mirror of the water. The passing to the second type of facies will be sharp, and to the facies of first type - depending on exposition of slopes, their steepness and width of near ilmen part.

Morphological structure of landscapes is in dependence on many natural conditions:

1) quantity of solar radiation, which is got to the unity of square;

6) type and moistening of soil.

Thereby, even at the limits of researched lot, comparatively small by its square, we can observe how by the influence of some or other factors occur different changes in nature of holes and facies of the same type, what can lead to the transformation of landscape in whole.

The work was submitted to the all-Russian scientific conference "Perspectives of development of HEI´s science", Sochi, 22-25 of September 2010. Came to the editorial office 28.06.2010.