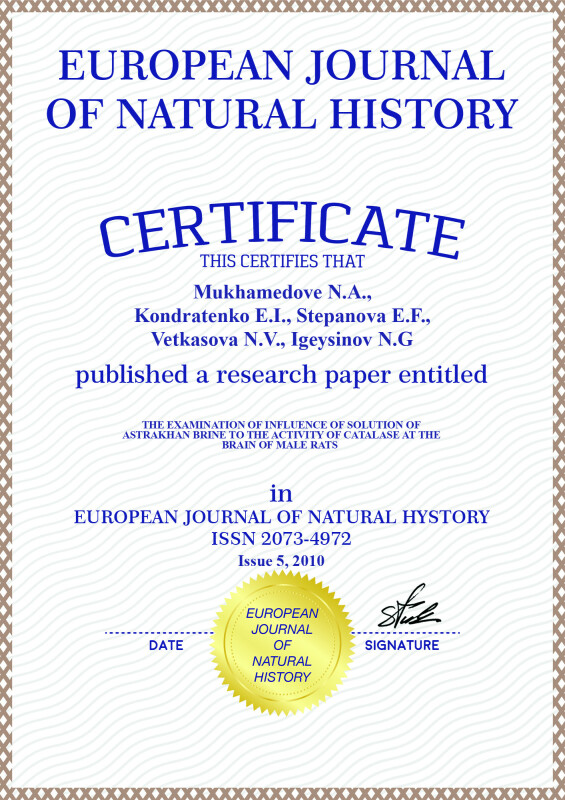 Nowadays there is no doubt that free radical reactions take a part at the initiation and formation of pathophysiological processes that lead at the base of a great number of diseases. The toxicity of free radical compound, including supertoxic radical, hydroperoxide of hydrogen and hydroxyl radical, in a great measure is conditioned by their possibility to affect biomembranes. The aim of our work was to value the influence of bischofite comprising brine of Astrakhan salty lake to the activity of antioxidant ferment of catalase at the brain of rats.

The experiment was carrying out at 30 white pedigreeless rats with the mass of 300-350 gram. Rats were divided into 3 groups (n = 10): experience - Astrakhan brine (per os, 1,7% solution, dose 3 milliliter/kg, once a day, 10 days); the group of competition (Volgograd bischofite at the equivalent concentration) and controle (0,9% solution). The activity of catalase was defined by the methodic of M.A.Korolyka and others (1988).

The function of catalase consists at the decomposition of peroxide of hydrogen and protection of biochemical systems of cell from its toxic influence. In the course of experiment there was established that the activity of catalase at the brain of rats reliable increased at the groups of gotten the solution of Astrakhan brine and the solution of Volgograd bischofite more than in 2 times. The activity of cataase at the homogenate of the tissues of brain while the endogastric introduction of chloride sodium (controle) was 56,38 ± 9,8 nmol/l, then that in groups of animals that were gotten solutions of Astrakhan brine and Volgograde bischofite 135,3 ±6,2 nmol/l (p<0,05) and 115,6 ± 9,1 nmol/l (p<0,05) accordingly.

Thereby received facts testify to the presence of antioxidant behavior of Astrakhan brine, that indicates to the necessity of further deep researches.

The work was submitted to the International Scientific Conference «Fundamental research», Israel, Tel Aviv, 10-17 April, 2010, came to the editorial office on 21.03.2010.