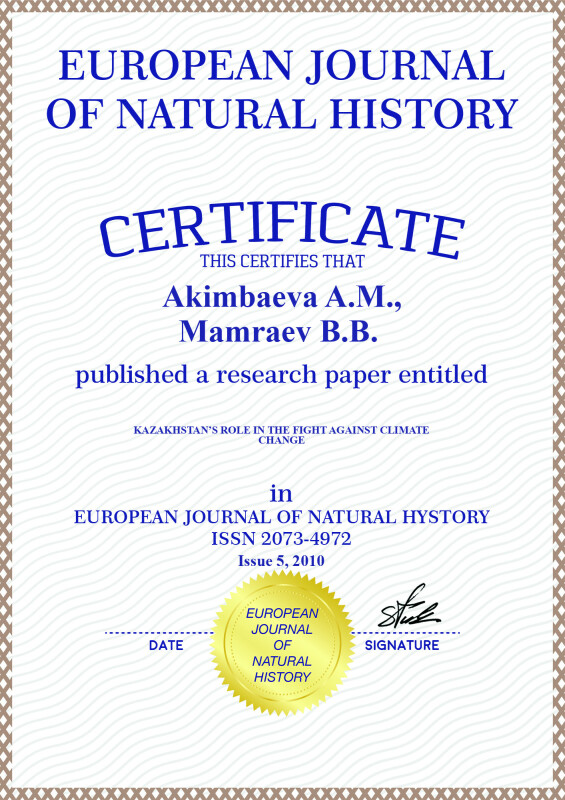 KAZAKHSTAN’S ROLE IN THE FIGHT AGAINST CLIMATE CHANGE

The problem of global climate changes is the topic of many international top-level meetings. The issue was first stated at the 1st World Climate Conference, which was held in 1979. In the 80-ies, the United Nations Environment Program and the World Meteorological Organization (WMO) held a number on international scientific seminars and identified the problem using a scientific approach. Responding to the growing public interest to the ecology, the series of international conferences led to creation of an Intergovernmental Panel on Climate Change (IPCC) by WMO and UNEP (United Nations Environment Program) in 1988.

Certainly, signing international conventions and agreements does not mean an immediate integration in the world community of global ecological, economic or energy security. A real integration requires many further changes in the foreign policy, as well as in internal issues, such as authorities, civil society, legislative harmonization and development, infrastructure. Kazakhstan is currently at the beginning of the second stage of its integration into the international community.

Climate change is one of the global problems that causes concerns of many country leaders, scientists, politicians and society. Kazakhstan has been a party of the UN FCCC since 1995. On 12 April, 1999, Kazakhstan signed the Kyoto Protocol and ten years later, ratified it in March 2009. Since 1994 Kazakhstan has been discharging its commitment towards UN FCCC. In 1998, the First National Communication was prepared with foreign financial support, and presented at the 4th Conference of the Parties of the UN FCCC in Buenos-Aires (Argentina). In 2009, the Second National Communication, sponsored by the United Nations Development Program and the Global Environment Facility (UNDP/GEF), was prepared and presented. In 1998, at the 4th Conference of the Parties of the UN FCCC Kazakhstan declared its wishes to take an active part in the fight against climate change. And in 2000, the Foreign Ministry sent a note to the UN General Secretary, informing of Kazakhstan´s intention to undertake voluntary obligations to reduce its greenhouse gas emissions.

At the 7th Conference of the Parties of the UN Framework Convention on Climate Change in 2001, following complex negotiations on Kazakhstan´s status, it was decided that Kazakhstan will become an Annex 1 Party under the Protocol, after ratifying the Kyoto Protocol and its entering into force, according to Article 1, paragraph 7 of the Protocol.

Signing of the Kyoto Protocol and its consequences were a matter of discussion in the republic. In April 2005, this issue was considered by the Commission for Stabilization of Environmental Quality chaired by the Deputy Prime Minister of the Republic of Kazakhstan. The commission has instructed the Ministry of Economic Affairs and Budget Planning to explore the possibilities of meeting by Kazakhstan its quantitative targets for greenhouse gas emission reduction, and report the results to the Ministry of Natural Resources and Environment Protection.

The chart defining the attitude of specific volumes of blowouts of payload from a firing and electronic field production, per capita A number of Kyoto Protocol projects have already been carried out in Kazakhstan, including utilization of the associated gases, increasing energy efficiency, construction and reconstruction of small hydropower stations. Their results have definitely contributed, though moderately, to the reduction of the world greenhouse gas emissions and prevention of the global warming.

The Ministry of Environment Protection has begun a preliminary registration of emission reduction projects in Kazakhstan, in other words, the Designated National Authority has been established.

In our opinion, the following diagram describes the qualitative distribution of economic goods among citizens in different countries and the price of these goods in terms of the impact on the global environment and climate (according to public fond "Climate Change Coordination Center, Astana, 2009). The diagram below shows the correlation between the GDP per capita and environmental stress, i.e. greenhouse gas emissions per capita, in different countries.

All countries can be divided into three groups:

The first group (green ellipse) is represented by the leaders - developed countries with high GDP per capita and relatively high per capita CO2 emissions.

The second and the largest group (red circle) is formed of the countries, which economies lag behind the developed ones due to different reasons. This group also includes the former socialist countries.

The last group (black ellipse) includes the countries with high living standards and at the same time high level of greenhouse gas emission. These are mostly primary producers and oil-exporting countries.

The existing heterogeneity in the group of leaders is caused mainly by different emission levels. Countries, which in the recent decades invested a lot in renewable energy sources and energy-saving policy (such as Europe and Japan), differ considerably from the states that continue to run the old energy policy in the name of their economic targets (the USA, Australia, Canada). The red circle is a knot of problems, often caused by an unfavorable prehistory. These are the transition economies, which try to strike outside the red line, as well as some hopeless outsiders, which continue their endless fight against poverty. The red circle also embraces future giants of the world economy: China, Russia, Brazil, India and other.

The republic of Kazakhstan is marked with blue squares on this diagram, describing the country´s development in different time periods. Comparative analysis of facts between 1992 and 2004 shows the economy´s low and its sustainable growth beginning from 2000. Nevertheless, fire emissions of greenhouse gases tend to grow proportionally. The last square, which migrates into the black circle, represents the forecast - the target values under condition of industrial development and innovations.

If the blue line is the limit of sustainable development in industrial countries, then we can observe a trend in Kazakhstan´s development towards it. But even by 2015, Kazakhstan will reach the black ellipse at best, i.e. will join the countries that eat away their resources. Taking into account the topic of this report, we would like to focus your attention on this conclusion. In this respect, we feel it urgent to address the decision-making authorities and remind them that it is essential to consider the international development trends and the actions of world economic leaders when developing any long-term strategies. It should be mentioned that in the last few years, many energy-exporting countries went for the economic diversification. They provided a considerable flow of investments in the tourism sector, transport and its infrastructure, high technologies, IT and communications.

The climate change is a global issue. However, its influence on the human society cannot be automatically excluded from the scenario of world development or predicted temperature dynamics on the Earth. Some people and countries react to external effects stronger than the others, they have different abilities to adapt and cope with the constantly growing risks of climate change. Dissimilar abilities to cope with these risks sharpens the inequality of their chances. As climate change becomes stronger, it will interact with the existing structures causing further controversies and disadvantages.

Materials are based on the foresight research.