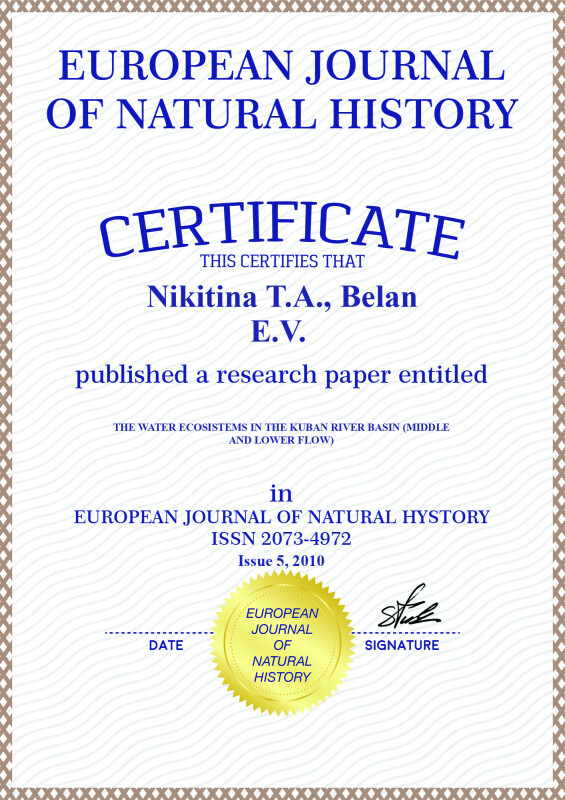 The largest water loggings in the region affect not only agricultural lands, but also residential areas.

Water logging due to natural and anthropogenic factors leads to saturation of soil by water, and causes disastrous changes in its physical, mechanical, agrophysical and agrochemical properties, as well as in the vegetation.

The river beds and the coasts of the Black and the Azov seas are exposed to wave abrasion and degradation. Yearly, the sea washes away about 100-120 thousand tones of soil landscape; the total loss of the high-grade Kuban black earth is estimated at hundreds of hectares.

More than 20% of Kuban´s annual flow is irretrievable water consumption, which causes insufficient water supply of spawning areas in the Kuban lagoons and worsens the hydrochemical conditions, already affected by considerable discharge of polluted waters from the rice fields.

Water conservation zones in the rural areas are often involved in the crop rotation with the use of herbicide and pesticide weed control, which suppresses the aquatic and semi-aquatic flora and fauna.

Analyzing the data on the catch of migratory and semi-migrating fish species in the last ten years, we can see that depletion of commercial fish stock has not ceased, moreover, a steady trend of further reduction is being observed (Yu.I.Zaidiner, L.V.Popova, 1997, 2002; L.T.Gorbacheva et al., 2006; T.A.Nikitina, O.I.Akselev, 2007).

The biogenesis of the Azov-Black Sea Basin is exposed to a number of negative factors:

- the main rivers of the Azov-Black Sea Basin are overregulated;

- rivers and seas are contaminated with petrochemicals, heavy metals and other substances;

The water ecosystems also largely affected by snowmelt and rain water, carrying harmful substances from the residential areas. Wastewater is discharged by dilution directly from the sewers into the surface water, causing its pollution. Water probes taken from the rivers below the cities of Maikop and Krasnodar, exceeded the maximum permissible concentrations of substances that have an obviously anthropogenic origin. Due to that fact, construction of sewage cleansing facilities is a vital problem for many big cities in the Kuban region.

Floods on rivers Belaya, Laba, Fars and Kurjips, which occur at any time of the year, have also a negative impact on the water ecosystems, as they constantly change the stream beds, lead to river bank collapse and new alluvial formations, which get overgrown with tree and shrubbery vegetation.

Longstanding hydrochemical studies on the water quality revealed a higher content of phenols, petrochemicals and iron in the rivers. The organic content rises from the river´s source to its mouth, due to the developing side erosion in the plain part as well as the human activities. The main sources of river contamination are housing and utility facilities, which discharge about 95% of all polluted sewage.

The contamination degree of the river flow can be evaluated generally as «moderately contaminated waters».

The work was submitted to international scientific conference «Ecological monitoring», Turkey (Antalia), 16-23 August 2010, came to the editorial office on 29.06.2010.