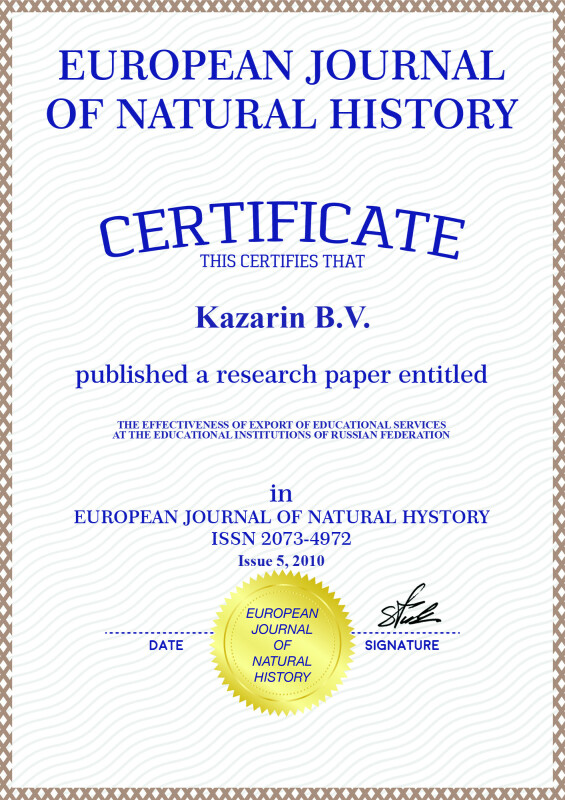 Nowadays the more and more currency is gain by the problem of widening the export of educational services of Russian higher school as a real contribution to the modernization component of economy.

With it, in the opinion of A.V.Rozhdestvenski, "...one of the global aims of internationalization of higher education provides for getting an income. At its frames the educational services are supposed at the fully paid base without concession of state subsidies. Foreign students give an opportunity of attraction of extra sources of financing, and thereby they stimulate universities to realize enterprise strategy at the international educational market [5]".

This work correspond itself further development of published earlier works [1, 2] about pricing at the HEI (at the example of Kuban state medical institute - academy - university), and concerns more long period of observing - from 1991 till 2009 year.

As one see from the table 1, the approaches to the pricing at the Kuban state medical university during the period from 1990 year and up to present changed specifically. The initial price of education of foreign citizens in our university there was found a price of 1000 of dollars in a year for one student.

An aspiration for increase of the contingent of contractual foreign students makes the HEI to widen the network of mediatory structures, which work by the enrolment of foreign citizens for studying at the commercial base, simultaneously with it such discounts as the discount for the cancellation of dormitory and "bonus" contract (per se "barter" settling for the services of mediator in percents) become being permanent. Al this allowed in 1993 year to get under way of increase of price of education.

1993-1995 years side by side with unification of discounts for mediators and their decrease, are characterized by the increase of the price of education. Starting from 1996 year, the university fully renounces the discounts for mediatory structures. There become effective the principle: "the mediator is independently levies pay that is due to him, in the excess of the sum that is due to HEI, and the HEI doesn´t meddle in the financial relations between the student and mediator" [3].

At the table 2 there are represented facts, which characterize annual resumes of enrolment of contract foreign students in 1990-2009 years.

The facts at the table 2 are represented in a form of relative quantities, and at the columns 2, 3 and 4 the results of enrolment in 1998 year are taken in the form of 100 percents, and a column 5 is calculated with regard to the contingent in corresponding to the school year.

As one see from the given facts, starting from 1990 and till 1992 year there is observed "explosive" increase of enrolment of contract foreign students, and to the 1993/94 school year there is due the maximal number of students, which were admitted to the first course of academy, in the 1994 year the enrolment decreases to the indicators of 1992 year and remains rather stable till 1996 year, when there begins the decrease of this quantity that strengthens to the 1998 and further years.

The real price (in contrast to base price is the actual price of contract after the extension of discounts) of one contract, which was concluded with foreign students that were admitted to the first course slowly, except the leap in the 1991 year, increases. During nine years it grew approximately in 1,6 times, reached in 1998 year some minimum, then decreased, and from the 2004 year continued to grow again.

Other character has the change of general sum that was received by HEI by the contracts, which were concluded with first-year-students. From 1990 till 1994 year this sum increases, reaching in the 1998 year the intermediate quantity between 1991 and 1992 years. In following period (1999-2004) the takings of means decreased, and only from the enrolment of 2004 there are observed the increase of this indicator.

Thereby, comparing the facts of tables 1, 2, and 3 one can conclude that the increase of the cost of education of contract foreign students in Kuban medical academy and the liquidation of discounts for mediatory structures leaded to the negative changes of indicators of enrolment of corresponding school year and all contingent of contract students in general. While this the decrease of indicators was found as slow and began to improve only in 2004-2007 years, but the liquidation of discounts for the mediators in 2008/2009 and following years leaded to the decrease of number of foreign students of HEI again.

The diagram 1 clearly illustrates the connection between the number of contract foreign students, which are annually admitted to the academy, and real cost of education for the corresponding year. There attracts out attention the opposite dependence between these quantities.

Represented in this work facts, which characterize the price policy of Kuban state medical university, show that sharp changes at the sphere of pricing, for the reason of which there was carried out an enrolment, can lead not only to decrease of the number of first-year-students, but also of the all contingent of foreign students. The essential part while this is acted by stability of contractual obligations between the HEI and mediatory structure, which does the recruiting of foreign students.

The questioning of students showed that many of them as the negative moment call instability of cost of the contract, which is noted not only as a change of the price of enrolment but also as introduced right of the HEI to index the cost of education unilaterally. This is confirmed in the work of S.M.Smolski [4] from the rather successful Moscow energy institute, at which there is stated the situation of "special importance of saving the base price during the number of years, what promotes the improvement of marketing situation for the HEI".