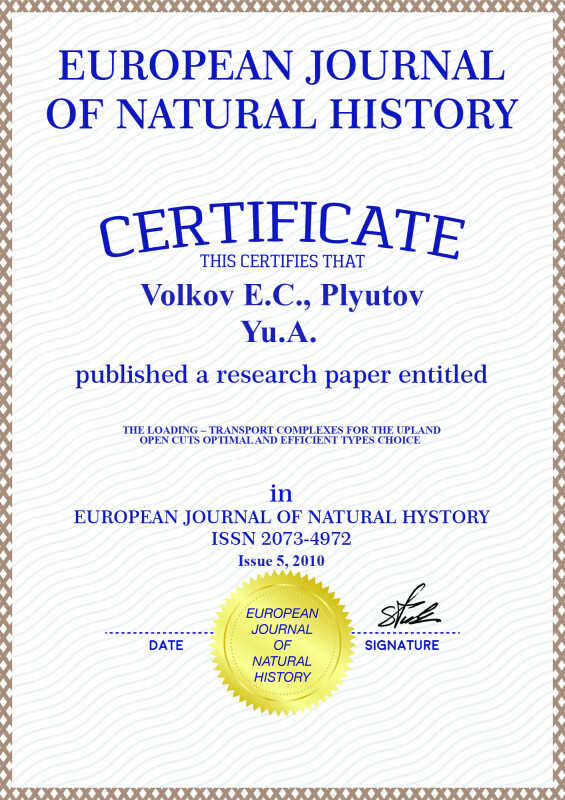 At present, the road transport in complex with the excavators or the bucket loaders are being used mainly on the world´s upland open cuts. Its exploitation is being characterized by the high level energy content (e.g. by the large fuel consumption), by the cargo transportation considerable prime cost, by the difficult routes, and by the environmental pollution. The aerial cable - aerostat transport systems, which will be able to be provided the complete energy autonomy of the work by the shortest way over the surface, are suggested to be used by us, as the alternative. For all this, the high work standards and the good performance by the energy efficiency and the transport works ecology will be achieved.

The existing and the suggested upland open cuts´ transport systems comparison is being carried out by the efficiency measures and the performance criteria, which are being defined during the mathematical - economically modeling on the PC. The cargo transportation prime cost, the energy specific consumption, the efficiency, the reliability indices and also the ecological qualities and characteristics are being related to all these criteria. The already developed mathematical - economically model is being provided, as the optimal (e.g. by one efficiency criterion), well as the rational (e.g. by efficiency measures and the performance criteria aggregate) versions. So, the preliminary calculations and the pre-designs have been shown, that the aerial cable - aerostat transport plants, in comparison with the motor transport have, in general, less its prime cost and the energy specific consumption, but and they have less efficiency, and also the low level technical availability for the service coefficient. The loading - transport complex with the aerial cable - aerostat gravitational plant (e.g. the cargo transportation distance has been varied from 1,5 up to 8 km in the different transport schemes) is the efficient one for the upland open cuts, having had the annual production rate from 0,2 up to 2,5 mln. tons and the transported cargoes apparent density from 1,5 up to 2,5 t/m3. The upland open cuts´ efficient transport scheme choice methods are being developed on the basis of the received and the final results.

The work was submitted to the scientific all-Russian conference «The Science and Education Contemporary Challenges», Moscow, 16-18 February, 2010. Came to the editorial office 14.12.2009.