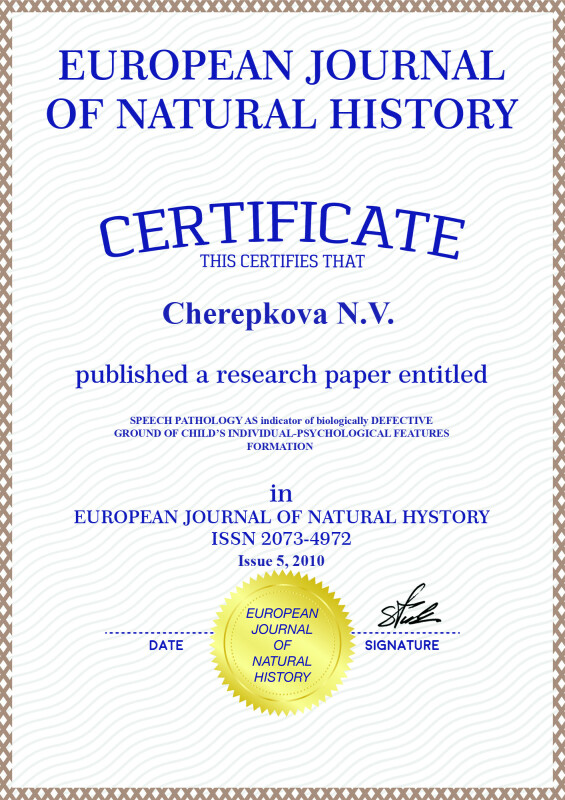 The concept of mental as process (S.L. Rubinshtejn) is a methodological basis of understanding and research of mentality´s succession and continuity (continuality) as a whole and it´s any traditionally selected component (I.M.Sechenov, S.L.Rubinshtejn, A.N.Leontiev, A.V.Brushlinsky).

Being mediated system of language signs which named (by L.S.Vygotsky) - mental implements, speech reconstructs all mental processes of person, reached conscious functioning level. Connected with consciousness as a whole, speech of person is incorporated into certain mutual relation with all mental processes.

As L.S.Vygotsky´s, A.N.Leontiev´s, A.R.Lurija´s and other scientists works have shown, human forms of behaviour, speech, mental functions and abilities are not given to child from birth. They are formed under decisive influence of purposeful perception and training, his life in society conditions.

Studying human consciousness and emphasizing its connection with activity, in which it´s not just appears, but also formed, it is impossible to digress from that person - is a social creature, his activity is social and consciousness is social too. The consciousness of person is formed during communication between people by speech means (L.S.Rubinshtejn).

Connected with consciousness as a whole, speech of person is incorporated with certain mutual relation between all mental processes; but the basic and determining for speech is its connection with thinking. A priori, i.e. without special proofs, it is obvious that language and thinking are connected with each other. However correlation of thinking and speech - is a difficult enough problem. Its offered solutions were different - from admission of independence and full division of thinking and speech to so unequivocal their identification. Now prevails the compromise point of view according to which thinking and speech are closely interconnected although in genesis and functioning they are independent realities.

Specific features of children´s with speech pathology intellectual development are caused by mechanism and structure of speech defect.

According to number of authors (R.I.Martynova, 1973 etc.) in preschool age children with dyslalia are observed to have hypererethism or, on the contrary, sluggishness; frequently they have insignificant general development retardation. Children with defects of articulation are less active in collective, ashamed of speech defect. Their speech frequently causes sneers of the same age children and critical remarks of adults - all this depresses them even more and results secondary changes in character. Irritability, tearfulness, sensitivity of such children can be early developed. They cannot cope with bad speech independently and, suffering from that, react by aggressive behaviour.

Patients with rhinolalia (cleft palate, cleft lip) are observed to have features of emotional experiences associated with position of such children in collective or preschool institution. All this easily smooths out in family by reasonable enough and love treatment of surrounding people. Among patients after surgery of cleft palate there are people which have graduated high schools with honours, entered the postgraduate studies, capable workers of different specialities.

At motor alalia, aphasia, dysarthria - speech defects which have arisen because of central nervous system organic lesion, - disorders of any thinking processes are more expressed, than at stuttering of organic genesis. Specified heavy speech defects change children´s ways of communication, socially - psychological adaptation, break means and ways of intercourse, reducing intellectual development general level. Children with expressed speech disorders are frequently observed to have mental retardation which characterized by delayed rate of reception and quality of information processing, that also worsens adaptable and communication abilities of child. This group of children have undeveloped skill of purposeful conditions analyzing of cogitative task, or situation in which they are in real life, in its essential elements, its important elements sorting out, generalization, abstraction, control realization and adequately estimation of activity results. There are arise practical difficulties in planning and adequate choice of problems solution, and also during consecutive realization of those operations which child will seize, particularly in "step-by-step" own activity control realization. These difficulties are combined with stability and disorder of attention switching that results not only numerous mistakes, but also pseudoneurotic symptomatology as irritability, inactivity, emotional lability etc.

Representatives of borderline abnormal personality display a low level of compensatory brain abilities. Quickly formed pathological speech functional system depresses protective mechanisms and adaptable forms of nervous system reorganization that promotes development of pathological process and further disintegration of central nervous system activity as a whole. It is shown in chronification of speech frustration and all nervous system as a whole and, as a consequence, appears emotional experience of defect, psychological problems of personality character.

Therefore, constitutional conditionality of organic insufficiency of brain allows to define a belonging to concrete psychic type, concerning to concrete range of psycho-typological continuum. Constitutional-typological insufficiency of higher nervous activity and personality results (under influence of adverse factors) fast intensification and stabilization of abnormal personality variability of children with speech pathology, from character accentuations to range of borderline abnormal personality up to psychopathy. Thus speech is one of the basic parameters of constitutional - continuous personality variability.

The work was submitted to international scientific conference «Fundamental and applied research in medicine», France (Paris), 15-22 October 2010, came to the editorial office on 15.09.2010.