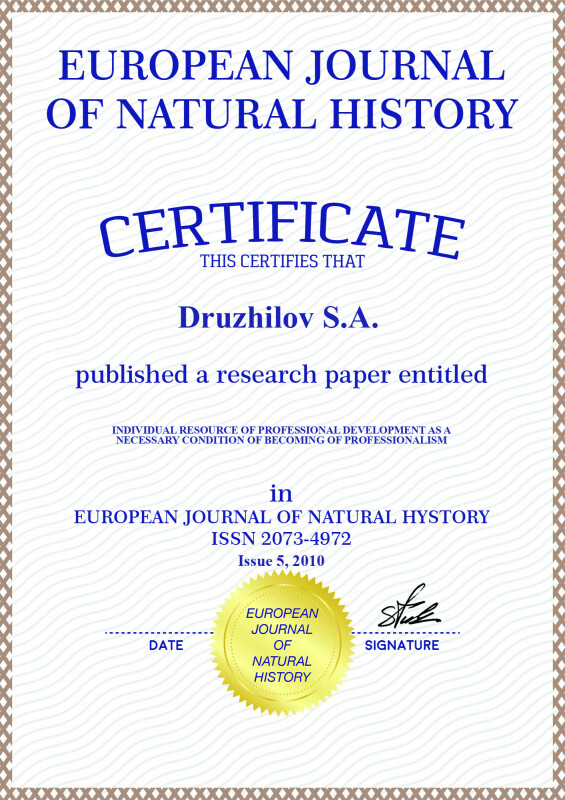 Professionalism is considered by us as the behavior of people to carry out complicated (professional) activity with high effectiveness and quality while different conditions [4]. Carrying out of activity at unfavourable conditions requires involvement of human´s existed potential possibilities - resources and reserves, which are directed to the compensation of unfavourable factors of environment, and also to the getting of positive result. Professionalism reveals not only at achievement of human high production indicators, but also at the peculiarities of his motivation, sence of labour, system of aspirations, value orientations, relations with the World.

Professional becoming can be represented at the view of two base lines: a) as the development of activity - of its structure, totality of ways and means, order of movement of which has target determination; b) as the process of development of human as a professional. At the article there is an accent to the theoretical analysis of becoming professional by human-personality. Human is a biological individual, personality, subject (of labour and life in common) and individuality. While the professional becoming there are brought into play all its levels, but degree of their "participation" changes depending on concrete phases. Professionalization is accompanied by the changing of human in common - of his individual, personality, subjective qualities, formation of individuality. The most meaningful here are highest levels of human - personality and subject.

The term "formation" is opened as category that expresses the changeability of things and phenomena - their continuous transition into something other, as the notion, which characterizes transition condition. While the psychological study of professionalism of human at the category "becoming" we would single out procedural and resultant aspects, which are dialectically connected. Procedural aspect is characterized by dynamism, constant incompleteness. Becoming (as the result) is considered as something already appeared, but still very far from completion. Let´s make it clear: something that appeared at the base of something and it´s developing. While the consideration of any line of professional becoming (development of activity or human) there is suggested that for such development there is a base - reached earlier levels of activity, or existent behavior of human. From this there is follow that becoming of professionalism is possible only at the base of human´s existing inside resources.

Development (at the scientific meaning) is a process of motion from the lowest (easy) to the highest (complicated), which realizes inside tendencies and essence of phenomena that leads to the appearance of new. At philosophy the development is considered as irreversible, directed, logical change of matter and consciousness; at the result of development there arises new condition of system - its composition or structure. There are singled out two lines of development: ascending (progress) and descending (regress). At first case there occur expansion and arising of system´s possibilities, complication of its inside and outward connections; at second case - decrease of such possibilities, which is accompanied by comparative simplification of system´s structure, by increase of irregularity at connections between its elements. The development is guaranteed to each element of any system and to systems of any kind. Changes occur spontaneously, because while the definite condition of system (appearance of inside and outside oppositions) they have no way not to happen. Development is not only quantitative changes, but also quality transformations. Therefore regress (to which belong not only professional deformations, but also destructive carrying out of activity) cannot be considered simplified as the process of return to the previous phases of development.

Changes of human occur inevitably, logical, involuntarily at that moment, when at the system "human - profession - World" there form antagonisms between requirements of professional activity and professional society, on the one hand, and possibilities, abilities, style of activity and communication, experience of human - on the other hand. While the considered like this professional development changes of human-personality are not planned by him "events in life", and they not depend on his will.

It´s common knowledge that individual characteristics of human (installations, degree of pretension, peculiarities of intellect etcю) can not only promote becoming of professional mastering and creative approach to the labour activity, but also impede it. We consider that only those characteristics that promote forming of his professional mastering and are accompanied by progressive changes in his personality can be put into the earlier singled out by us individual resource of professional development (IRPD) [1]. The presence of necessary IRPD promotes human´s professionalization. The shortage of IRPD not only complicates professional becoming of human but also leads to the professional deformations, destructive carrying out of activity and to the premature professional aging [3].

The problem of self-consciousness, by S.L. Rubinshtein is the problem of definition of one´s own way of life. S.L.Rubinshtein (1940) singled out two ways of human´s existing in this world. First of them - is life, which doesn´t go out the spontaneous connections, in which human lives. In that case at the system of relations of human there dominant his attitude to certain phenomena of reality, but not to the life in common. Second way help human out of the frames of particular; it´s connected with the recognition of value-sense categories. L.M.Mitina orienting at these types of human´s existing describes two models of development: a) model of professional functioning - adaptation; b) model of professional development - creativity and personality growth [6]. We consider that these models can be considered at the dynamic as the phases (levels) of professional development.

Professional functioning as adaptation is determined with oppositions, which occur at the system of "requirements of profession - possibilities and needs of human". Adaptation is considered widely: this is not only accommodation of human-personality, but also accommodation (transformation) of professional environment that means it´s changing according to the requirements of human-personality. In that case human acts like a subject of labour, emergent to the level of specialist. Examined level of professional functioning doesn´t require withdrawal from the "frames of peculiar". The dynamics of professional life by this model is adaptation, becoming and stagnation.

If profession stops to put human into the situations that require solving of oppositions then he should find the senses for his further self-development as the professional by himself. The source of self-development is IRPD; it defines the vector of personality´s development or the realization of its potentials. Professionalism doesn´t except humanity, and self-development appear itself the way of reaching and comprehension of humanity by specialist.