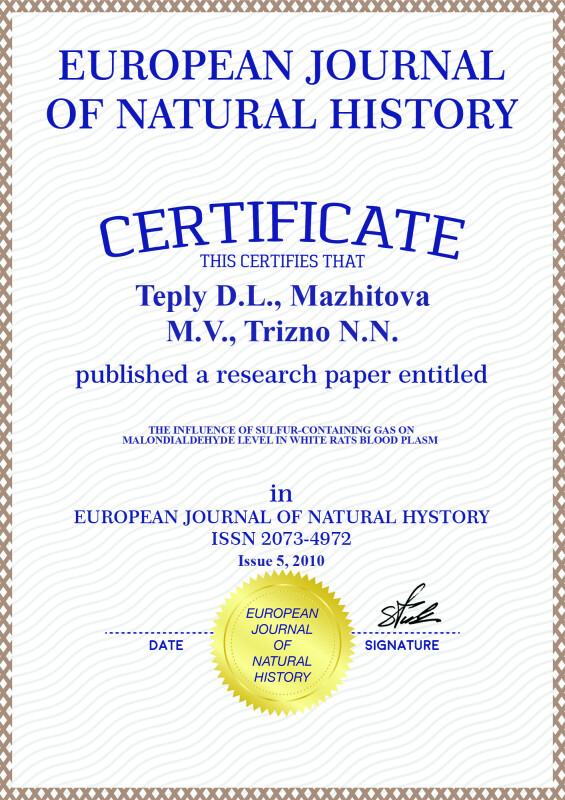 In organisms during all evolution there were produced protective systems, which are summon to safe optimal level of self-radical processes, which changes while different interactions. Astrakhan gas processing complex (AGPC) takes special place among the industrial enterprises of region. From the sulfur-containing discharges of AGPC, the biggest danger for health of population has hydrogen sulfide, which has expressed toxic action to the whole organism. In spite of that fact that hydrogen sulfide has a restoration activity, during its transformation, in the organism there formed active oxygen metabolites and there are strengthen the processes of peroxide oxidation.

The aim of our research was to define the content of final product of peroxide oxidation of lipids (POL) malondialdehyde, and also spontaneous ascorbatedepending speed of POL at the plasma of blood of white rats after chronic inhaler influence with sulfur-containing gas of Astrakhan deposit.

Theresearch was carried out at the fall-winter period of 40 animals of different sex, with the average mass of 180 g, which were contained in standard conditions of vivarium. The inhalation with sulfur-containing gas at the dose of 150 mg/m3 was carried out during one and a half of month five days a week 4 hours a day. POL at the plasma of blood was defined spectrophotometrically by the method which is based on the reaction of malondialdehyde with thiobarbithuric acid with the forming of tinctured trimethadione complex.

The analysis of changing the level of malondialdehyde showed the increase of contents
of this product both in males (Р < 0,001), and females (Р < 0,001). But males have more sharp increase
of level of MDA (by 200%), then females (≈ by 63%). The speed of spontaneous and ascorbate depending POL became reliably higher at the phone of influence independently from the gender of animal. Thereby, the results of our research indicate
the breach of balance at the system pre- and antioxidants in animals, what testifies that one of the damaging organisms of hydrogen sulfide is strengthening of link self-radical oxidation of different structures of cell membranes and subcellular formations.

The work was submitted to the International Scientific Conference «Fundamental research», Israel, Tel Aviv, 10-17 April, 2010, came to the editorial office on 18.03.2010.