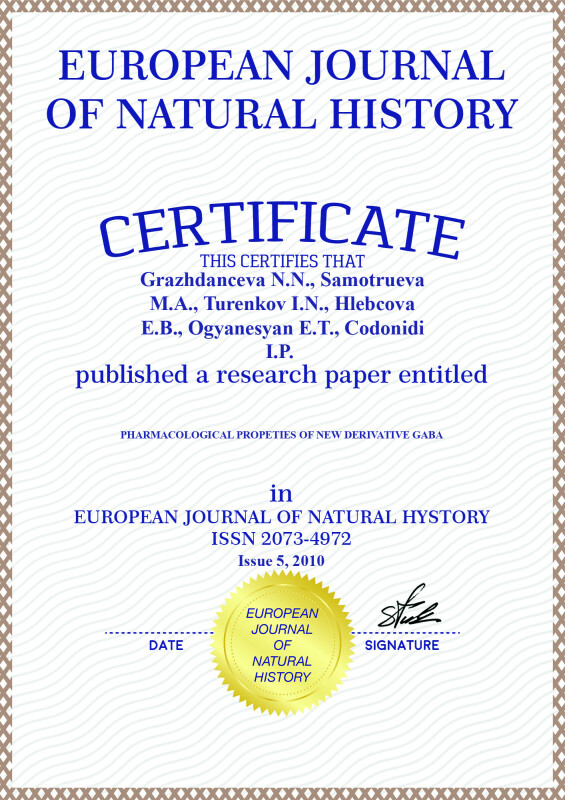 Nowadays by immune physiologists there was proved the most important role of neuroimmune connections in normal and pathological homeostasis of organism. The obvious interest is caused by perspective direction by the creation of new substances at the base of structural analogues γ-aminobatyric acid, which have neuroimmunetropic behaviors. In this work there are represented results of text tests of immune pharmacological behaviours of new derivative γ-aminobatyric acid PDЕ-GABA

The experiment was carried out at the 48 mouses of line СВА at the age of 3-4 months. Animals were divided into following groups: control - animals, which receive physiological solution and experiment - animals, which receive PDЕ-GABA at the dose of 35 mg/kg intraperitoneally during three days. The influence of PDЕ-GABA to the cell and humoral links of immune answer there were examined at the reactions of hypersensivity of slow type (RHST) and passive hemagglutination (RPHA) accordingly. There also was assessed the influence of examined substance to the mass and cellularity of immune competent organs. At the series with the RHST and RPHA the examined substance was interacted simultaneously with the immunization with red blood cells of sheep, and also with an interval in one day before and after immunization. Experimental work was carried out with the taking into account of International principles of declaration of Helsinki. While the comparison of indicators of experiment and control groups there was used a method of variative statistic.

During the experiment there was stated that examined substance under the laboratory code PDЕ-GABA while the intraperitoneal introduction at the dose of 35 mg/kg during 3 days takes simulated at the relations of cell and hymoral immune reactivity: the index RHST and titre of antibodies in RPHA raise the indicators of control group more than by 35%. It was revealed the stimulating action of PDЕ-GABA to the proliferative process at the organs of immune system: the mass of spleen and thymus exceeds the control meanings more than by 20%, the number of splenocyte and thymocites more by 60%.

Therefore, received during the experiment results testify to the presence in new derivative GABA - PDЕ-GABA - immune stimulating behaviors, what indicates to the currency of further researches by the studying of immune modulating actions of substance.

The work was submitted to the scientific interational conference "Fundamental researches", Israel, 10-17 April, 2010. Came to the editorial office 18.03.2010.