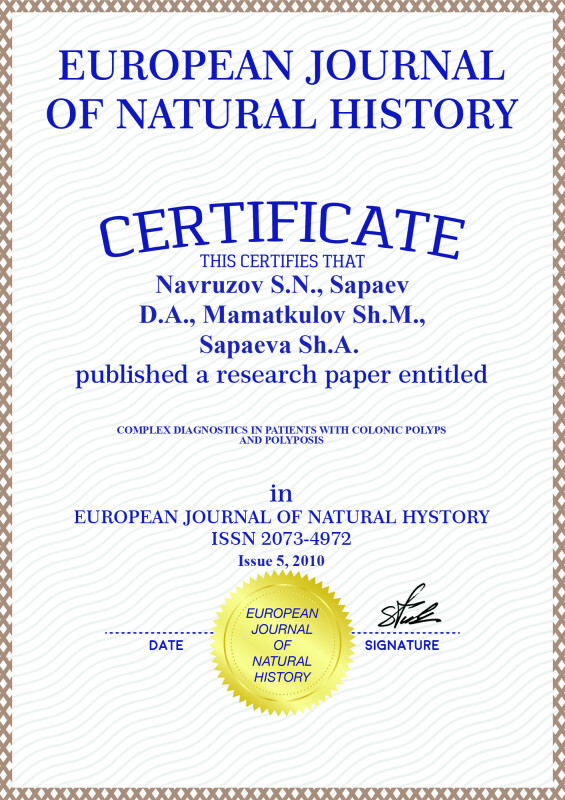 COMPLEX DIAGNOSTICS IN PATIENTS WITH COLONIC POLYPS AND POLYPOSIS

Diagnostics and treatment of colonic polyps and polyposis are the issue of today due to steady growth of the number of new cases. Most of researchers adhere to the opinion, that polyps are precancerous condition and tumors go through long stage of adenomatous polyp and 95% of malignant tumors develop from adenomatous polyps, and their removal is the way to prevent cancer [3, 9, 10, 13, 15, 19]. At the same time, regardless to surgical and conservative treatment the recurrences of the disease, complications leading to severe suffering of patients and hesitance in curability of it are quite frequent [1, 4, 11, 18, 20, 25, 28]. This is related to different factors, amongst which the genetic predisposition to development of colonic polyps and polyposis (CPP) and colonic cancer is believed to be one of the most important [5, 6, 8, 14, 26, 27].

In the context of the modern diagnostics of colonic polyposis, prognostication of malignization of polyps and choice of adequate surgical tactics, and issues of complex diagnostics of the disease on different levels of health care system, including rational use of modern diagnostic methods are important issues.

Development of diagnostic and prognostic criteria of severity of the disease and the risk of malignization of colonic polyps for health care institutions of different levels, using modern diagnostic methods (virtual colonoscopy, methods of molecular genetics).

The diagnosis of colonic polyps and polyposis has been made based on the outcomes of clinical-instrumental and laboratory tests based on the classification of V.D. Fedorov, 1983.

Forms and stages of the diffuse colonic polyposis were differentiated in line with recommendations of V.P.Rivkin, 2006 and based on morphological analysis of biopsy specimens of colonic mucosa.

Genetic part of the survey has been done in 64 patients with different forms of polyps and polyposis and in 20 healthy volunteers with unburdened genetic background.

Genetic research has been done in collaboration with the Laboratory of Human Functional Genomics at the Institute of Genetics and Embryology of Uzbek Academy of Sciences. DNA from the tissue specimens has been isolated using Wizard Genomic DNA Purification Kit (Promega, США) following the producer instructions. For PCR-amplification of fragments of the genes being analyzed the appropriate primers have been used.

Distribution of patients by sex and age, n=183

Distribution of patients by forms and stages of diffuse polyposis of colon: proliferating diffuse polyposis has been found in 35 (19,1±2,9%) patients, out of them I (hyperplastic) stage - in 25 (13,7±2,5%) patients, adenomatous - in 78 (42,6±3,7%), adenopapillomatous polyposis - in 54 (29,5±3,4%). According to publications data while making biopsy it is important to pay attention to the technique of sampling and histological sections preparation [1, 7, 15, 18, 21, 31]. While biopsy sampling during colonofiberscopy, it is important to make electroscission at polyps peduncle with minimal traumatizing of its rest parts. While taking a sample the excisions has to include the end, peduncle and base of the polyp. The main clinical features of polyposis included symptoms of intoxication, extraintestinal and gastric manifestations (Table 2). The most frequent symptoms were: melena (65,6±3,5%), general weakness (59,6±3,6%), abdominal pains (28,4±3,3%), weight loss (24,6±3,2%), anal pains (16,4±2,7%).

Complications of the underlying disease in patients with colonic polyps and polyposis, n =183

Molecular-genetic research helped to find out, that the diffuse colonic polyposis syndrome is caused by germinal mutation of the suppressor gene of the tumor - APC (Adenomatous polyposis coli). Besides, APC has the oncogene function, because some mutant forms of APC not only lose their normal function, but become able to fix and inactivate normal APC protein. Occurrence of the somatic mutation in a normal allele leads to inactivation of both alleles and occurrence of sporadic colorectal cancer cases [5, 6, 8, 14, 16].

Out of 64 genetically tested patients mutation in APC gene has been found in 51 (79.7±5.0%), in such a case, the frequency of its occurrence depended on the form of the disease. In 5 patients there were solitary, in 15 - multiple and in 44 - diffuse polyps, and out of the latter the Peuts-Jeghers syndrome was found in 11. In 16 patients there were found distal, in 8 - left side, in 6 - subtotal and in 34 - total affection of colon. Status of 10 patients was qualified as light, 20 patients - moderate, and in 34 patients as severe. 27 patients have undergone different operations on the occasion of multiple polyps and polyposis. In 27 patients there were found concomitant diseases (cardiovascular, lung, liver, gastro-intestinal tract and endocrine system). In 9 patients there was revealed malignant polyposis.

Availability of mutations of АРС gene made significant influence on the course of the pathologic process. Thus, there were no mutations of APC gene found in patients with light course of disease. In patients with moderate and severe course the frequency of mutations made 85.0±8.0% and 100.0±0.0% accordingly. There is also revealed the connection between the frequency of mutations and the extent of the pathologic process: in cases with distal and left side spread of polyps the frequency of mutations was 56.3±12.4 и 75.0±15.3%, whereas in cases of subtotal and total affection of colon - mutations were found in all examined patients (100.0±0.0%). Also if in absence of mutations there were mainly affected distal parts of colon, polyps were of small size and no complications of the underlying disease were found, in patients with mutations there was found subtotal and total affection of colon, with polyps in shape of "bunch of grape", big size polyps on the flat base. In patients with mutations in APC gene, especially those with Peuts-Jeghers syndrome, there was found total affection of colon with development of constrictions, malignization, polyps in shape of "bunch of grape". Quite frequently there was noted cachexy, posthaemorrhagic anemia. All the abovementioned indicate that molecular-genetic testing has to be included to the compulsory diagnostic complex of testing in cases of colic polyps and polyposis. It will allow to improve the results of surgical treatment, facilitating choice of adequate operative tactics. In patients with mutations in APC gene (mainly in cases of Peuts-Jeghers syndrome) there was also found affection of upper parts of gastro-intestinal tract and gallbladder with polyps.

According to results of ultrasound scanning in 2 out of 11 patients with Peuts-Jeghers syndrome there were found polyps of gallbladder (Picture).

Thus, in patients with multiple and diffuse polyposis, especially those with family polyposis and Peuts-Jeghers syndrome the APC gene mutations are found with high frequency (up to 100%) There is definite connection between availability of mutations in APC gene and inherited predisposition, course of the pathologic process, its extent of spread, clinical manifestations and complications.

The main screening principles are based on 3 principles: while making decision on the method and time of starting the screening the family and individual risk factors have to be evaluated; physician has to recommend the further examination in case of positive results of screening; patient has to be informed about both positive and negative sides of each test, in order to make informed choice.

The other widely used method - sigmoidoscopy, exceeds in its sensitivity the previous one. In polyp sizes up to 1 mm, 1-7 mm, 8 mm and more it constitutes accordingly 3-8, 18-31 and 58,2%, specificity of this method is - 2,1; 22,4 and 61,5%, and diagnostic value - 4, 18 and 31%. From the other side sigmoidoscopy in cases of big polyps and strictures does not allow examining the small intestine and colon fully, besides it is quite painful procedure, which frightens patients.

Colonofiberoscopy is the third by its information value instrumental method. [12, 15, 20, 24, 28, 29]. According to our data sensitivity of this method makes 28-42, 60-70 и 87,5%, specificity - 58,3; 64,5 и 90,1%, and diagnostic preciseness - 53,6; 70,3 и 80,7%, in cases of size of polyps up to 1 mm, 1-7 mm, 8 mm and higher - accordingly. The method of course requires thorough preparation of the patient, full cleaning of colon. Quite often there are noted false-positive results and impossibility of morphological diagnostics. One can speak about successful colonofiberscopy only in case of reaching by the device to head of blind colon. However if there is a stricture and colon deformation, the diagnostic possibilities and value of the method are significantly reduced. At the same time colonofiberscopy does not provide information about the internal structure of polypoid formations and does allow identifying the depth of invasion of the malignant tumor to the colic wall, its invasion to neighboring organs, as well as about the condition of regional lymphatic nodes.

While developing the algorithm of the complex diagnostic of polyps and polyposis we proceeded from the following principal requirements:

2. Available diagnostic methods have to be applied taking into account both the level and possibilities at health care facilities, as well as the individual patient´s condition.

3. Complex diagnostics has to help to divide patients into groups, according to severity and spreading of the process, which identify the tactics of surgical and rehabilitation treatment. In this aspect the identification and forecasting of malignization of polyps is crucial.

Based on the results of our long-term observation and analysis of global experience, as well as taking into account the abovementioned requirements, we divided the patients into 4 groups, based on the disease severity and colic polyp´s malignization risk levels. We developed the complex of diagnostic and prognostic criteria for evaluation of severity of disease and malignization risk for different level health care facilities (Table 4).

While developing the complex we identified at first the 4 risk groups for malignization - minimal, moderate, significant and high, based on the need to apply different surgical tactics in each of them. There were developed main clinical criteria for identification with special focus on number and size of polyps, as well as their minute structure.

For each risk group there were identified diagnostic methods, relevant to the specific health care facility to ensure continuity in the process of examination of patients on all levels - from primary up to tertiary one. It facilitates timely send patients to the relevant facility - starting from family doctors and ending by the level of specialized proctology and oncology centers. Special emphasis has been done in the groups of moderate and especially high risk groups for use of the most up-to-date methods - virtual colonoscopy (VC) and PCR. VC, being the most high-informative and valuable method in diagnostics of polyps and polyposis, at the same time is still quite expensive and does not provide full answer in terms of extent or risk of malignization. Complementing it with PCR allows to assess the degree of malignization and, accordingly, to have more differential approach to the choice of surgical treatment tactics.

1. Early diagnostics and effective treatment of patients with colic polyps and polyposis requires improvement of screening and diagnostics system on all levels of health care system - starting from GPs and ending by coloproctologist and oncologists working at republican specialized centers - through identification of risk groups on the basis of both severity and malignization risk criteria.

2. In order to make efficient choice of the best surgical tactics in patients with colic polyps and polyposis, the complex of diagnostic examination of these patients has to contain modern high-informative non-invasive diagnostic methods, including the ones of molecular genetics for forecasting malignization processes, as well as virtual colonoscopy for assessment of extent and character of a lesion.

3. The developed complex of diagnostic and prognostic criteria of disease severity and risks of malignization of colic polyps meets all necessary requirements of early and effective diagnostics, and can be recommended for wide implementation in health care facilities of all levels.