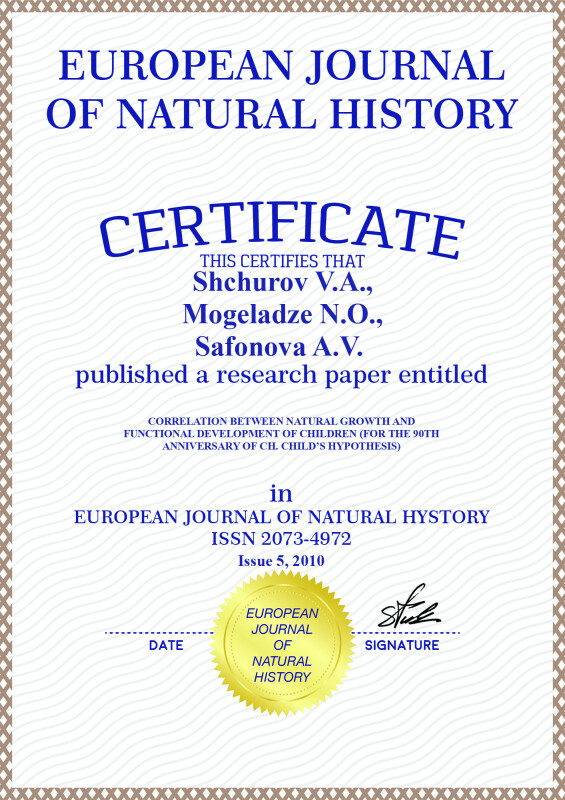 CORRELATION BETWEEN NATURAL GROWTH AND FUNCTIONAL DEVELOPMENT OF CHILDREN (FOR THE 90TH ANNIVERSARY OF CH. CHILD’S HYPOTHESIS)

On the basis of examination data of 3500 newborns for 20 years of observation it has been revealed that in case of prolonged worsening of population quality of life the decrease of body sizes occurs both in women in labor and in newborns, as well as the fall of functional maturity value of the latters. However, when economic situation stabilizes the birth rate coefficient rises and newborns´ development increases selectively. The revealed phenomenon of brain development rate maintenance for body growth rate deceleration confirms Ch. Child´s hypothesis of the craniocaudal gradient of fetal development.

Natural longitudinal growth of body in children and adolescents is implied by the conception of «growth», when the question concerns human beings. Under these conditions the increase of body sizes and development can´t be contrasted. And, although growth is a simultaneous result of development, at some stages of life the development itself can be a growth derivative (V.V. Kupriyanov, 1974). As far as body height increased, associated with development acceleration in children in the last century, continuous renewal of the best achievements in sport was observed (G.S. Tumanian et al., 1976).

Quality of life worsening of Russia population at the end of the last century has led to the delay of children growth rate, the decrease of the values of newborn functional maturity and that of the index of schoolchildren intellectuality [V.A. Shchurov et al., 2008].

According to Ch. Child´s hypothesis [1], the difficulties arising in the course of pregnancy (circulation worsening, intoxication) can have not only an overall negative effect on fetal growth, but a differentiated one as well, under which the brain is impaired to a lesser degree. What is more, under these conditions the brain can receive an additional impulse for accelerated development. The mechanism of adaptation mentioned forms the basis of developing a thinking type of constitution which is remarkable for small body sizes and well developed brain, increased ability of environmental adaptation.

According to Arndt-Schulz law, such stress effects as trauma and hunger should depress growth rate, however, at some stages of development the non-specific component of exogenous exposure is able to accelerate getting through some phases of development [B.A.Nikitiuk, 1978; I.V.Shchurov et al., 2006]. As for the purpose of our study, we attempted to substantiate the scopes for selective development of intellectual abilities during retardation of body growth processes.

The values of newborn functional maturity (Apgar-1 and Apgar-2), the tests of intellectuality index determination and the values of school progress have been used to assess the degree of the brain development in children.

3500 mature infants, born in Kurgan, have been examined in complex within the period from 1988 to 2009 (every year not more than 100 persons, born in June). In addition, 95 premature infants (22-37 week of pregnancy) have been examined, as well as 245 normal children of school age, and 30 children, whose mothers are professional sportswomen. Anthropometric data, developmental values and family´s financial position were analyzed. Moreover, 54 practically normal infants at the age of 17-72 weeks have been examined, and 67 children with growth and developmental deviations, associated with the pathology of pregnancy, delivery, with hereditary diseases, and being educated at infant´s home.

Study Results and their Discussion

In spite of the fact that before birth a fetus has growth craniocaudal gradient [Shevtsov V.I. et al., 2003], due to which the proportion of body and head longitudinal sizes gradually decreases, comparative analysis of the longitudinal sizes of body (L, cm) and circumference of head (О, cm) in premature and mature newborns has demonstrated that there is linear correlation between them: О = 0.715*L - 1.86; r =0.992.

Fig. 1. The plot of Apgar-1 value against head circumference in normal newborns

Fig. 2. The dynamics of longitudinal sizes of women-in-labor´ body on a basis of 18-year-old age achievement

Fig. 3. The dynamics of head circumference decrease and recovery of Apgar-2 value in children with respect to the level of 1988

After 1988 the social-and-financial position of the population in the majority regions of Russia has been worsened. The delay of women´s body growth (Fig. 2), the decrease of their pelvis sizes, body sizes of newborns, and 4-7% reduction of the values of their functional maturity - all this has become a result of such worsening of life quality. There was formed a tendency towards the improvement of economic measures in the population life in the last decade. Besides, the coefficient of birth rate increased from 9%о to 11.6%, the percentage of pregnancy loss decreased from 7.6±0.5 to 3.8%±0.2 (р≤0.05).

In the presence of this background the increase has been revealed concerning Apgar-1 and Apgar-2 values of functional maturity in newborns of Kurgan; in 1998 these values amounted to 7.21 ±0.09 and 8.35 ±0.07 points, respectively, and in 2009 they reached 7.35 ±0.07 and 8.63±0.06 (р≤0.01). This increment occurred through continuing deceleration of children body growth rate (Fig. 3). That is to say, the increase of birth rate and development rate took place at the expense of body growth deceleration. Hence, the decrease of body sizes is a form of adaptation under the conditions of nutrition quality worsening, which contributes to the recovery of functional development level in children and to that of population reproductive potential.

We tried to analyze the cases of differently directed dynamics of head growth rate and brain development. Gender-related differences represent the first exception. In girls head size is 1.3% less, and Apgar-1 and Apgar-2 values are unreliably higher (1.3% and 2.3% higher, respectively).

The second exception is represented by professional sportswomen. In sportswomen body mass is relatively less (Quetelet index is 0.37 and 0.44, respectively). Probably, a motor dominant is able to have a negative effect on a gestational one, to lead to limitations in meeting fetal needs, to deceleration of its growth rate. Head circumference of newborns in the group of mothers, who were not sportswomen, was 35.2±0.07 cm on the average, in women going in for sport - 34.4±0.3 cm (р£0.05). However, children in sportswomen are born with higher Apgar-1 value (7.6±0.05 and 8.2±0.11 points, respectively, (р£0.001). The level of school progress of sportswomen´ children in the first form was 13% higher. This advantage in development rates was gradually lost by the end of primary education.

In children with CNS pathology, who were abandoned by their parents, after birth longitudinal sizes and body mass were decreased in comparison with normal children of the same age. Normally the height of a 3-years-old child is 91.7 ±0.8 cm and body mass - 13.6±0.2 kg, while in case of developmental retardation it is 82±0.9 cm (89%, р<0.001) and 10.6±0.2 kg (78%, p<0.001), respectively. Myocardium mass in control and experimental groups was 37±1 g and 34.4±1 g, respectively. At the same time, myocardium mass correlated with body mass was higher in the subjects examined in experimental group with growth and development retardation (Fig. 4). Such a dynamics makes it possible to hope that in children of experimental group making up for growth rate may occur provided timely creation of favourable conditions.

Тhus, when quality of life moves up to another level under the conditions of economic crisis, dragged on for many years, the restoration of women´s reproductive function and newborns´ functional maturity is realized at the expense of adaptation, connected with the decrease of organism metabolic needs by decreasing its growth rates, thereby resulting in body mass reduction. That kind of process direction stands in opposition to the tendency towards perishing the population of country regions. The regularity revealed (birth rate rise through body size decrease for protein-calorific deficient diet) reflects general biological principle of species preservation in stabilization of unfavourable external factors of life.

The tendency towards restoration of women´s reproductive function in the last century is not so much connected with changes in life quality of population as with the population´s adaptation to the social-and-economic conditions created, which has specifically manifested itself in deceleration of natural longitudinal body growth.

The work was submitted to international scientific conference «Fundamental and applied research in medicine», France (Paris), 15-22 October 2010, came to the editorial office on 12.08.2010.