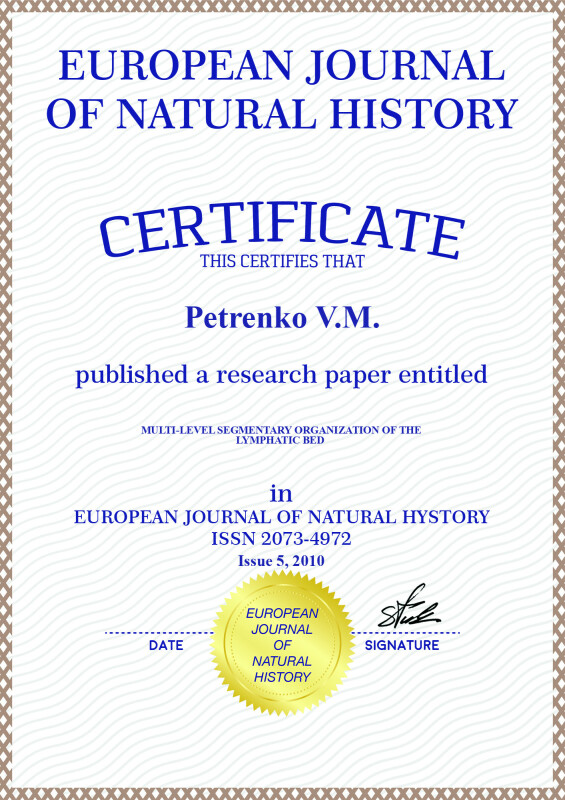 Lymphatic bed (LB) is the part of whole cardiovascular system but has specific construction. LB consists of different segments which organize flow out of surplus of tissue fluid as lymph in conditions of deficite of lymph flow energy. Multi-level segmentary organization of the LB includes its (kwazy)segmentary connection with arteries in the nerve-vascular bundles of different organs and regions of human body and fold construction of LB walls. Segments of LB can divide on general or intersystem (LB and blood bed) and special or intrasystem (intervalvar), general segments - on regional or periarterial, organic or perinodal, root or interarteriolar. In the periarterial segment lymphatic vessels and lymph nodes take place about extraorganic arteries. In the perinodal segment lymphatic vessels from LB of this organ or its part end into the neighbouring lymph node. The root segment takes place in microcirculatory bed district: terminal arteriolae and collective venules, their branches and roots "cut" lymphatic capillaries network on parts, usually from them the lymphatic postcapillaries go out and accompany terminal arteriolae and collective venules but don t always. On each level of general, paraarterial segmentation LB divides on intervalvar segments with different construction of the walls accordingly fluctuate character of lymph flow, tissue metabolism, functional activity of organs - endothelial wall of lymphatic capillaries with mobile contacts between cells (intrawall valves) supplements then its folds with connective tissue in lymphatic postcapillaries (true, intraluminal valves), smooth myocyties in lymphatic vessels and lymphoid tissue in lymph nodes. Morphogenesis of general segments of LB is determinated by influence of arteries and growing organs (over arteries) on primary venous and lymphatic paths. In early embryos branches of aorta connect with somites which determine their segmentary direction. Arteries break up primary venous bed that leads to anlage of primary lymphatic collectors along aorta and its branches - venous pockets, lymphatic chinks and sacs with their tributaries, including the intraorganic. Anlage of lymph nodes takes place along arteries too by means of their invaginations into lymphatic sacs and vessels - thus arteries break up primary LB. Segmentation in anatomic organization of primary vascular system partily loses later in result moving of organs from their anlage places, secondary fussions of peritoneum and anothers processes, reaching to a far greater extent in the walls of LB (intervalvar segments). Growing of some organs into mesenteries of another organs in embryos and secondary fussions of peritoneum in fetuses, grow of microstructures in organs and lymph nodes, inconstancy of blood and lymph flow lead to approach and association of existent paths and formation of new, more short, including abberant paths of lymph flow from organs, beginning from root segments of LB. Morphogenesis of the root segments are determined by special features of tissue metabolism, lymphproduction as main moving force of lymph flow in roots of LB. Arteries thanks to more blood pressure in them dominate in interactions with veins and LB, contact (dividing of embryonal vessels and massage of definitive vessels) and remote (over blood flow and tissue metabolism). As origin of blood supply for all organs arteries exert determinative influence on tissue metabolism, grow of organs, lymphproduction and lymph flow, morphogenesis of LB intervalvar and general segments.

The work was submitted to international scientific conference «Fundamental and applied research in medicine», Sochi, 22-25 September 2010, came to the editorial office on 30.08.2010.