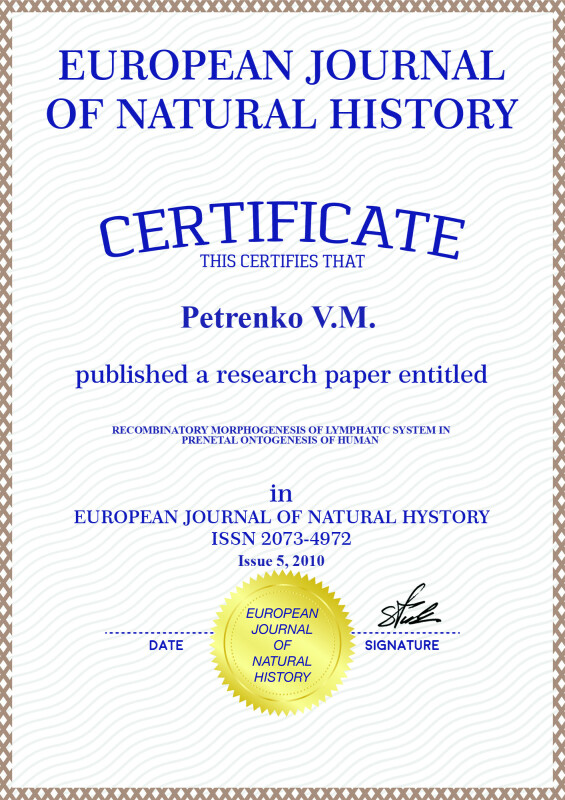 RECOMBINATORY MORPHOGENESIS OF LYMPHATIC SYSTEM IN PRENETAL ONTOGENESIS OF HUMAN

Morphogenesis of lymphatic system is the result of interactions of different uneven increasing vessels, its forms change such as structure and topography of vessels and their combinations:

1) differential morphogenesis of primary venous bed - its division on secondary veins (magistrals) and lymphatic chinks with tributaries (collaterals) after this anlage lymphatic sacs and primary vessels in the result of interactions of arteries with primary veins;

3) modificatory morphogenesis of secondary lymphatic bed - its modification by means of uneven growth and deformation of its walls with various appearence of valves and intervalvar segments, smooth myocyties. For instance pressure of aorta and its branches on some parts of thoracic duct causes increased formation of valves and smooth myocyties in these parts - they limit reverse lymph flow and support direct lymph flow. These processes can pass consecutivelly as stages of lymphatic system morphogenesis or parallelly and even in intimal relation especially last two processes. Thus morphogenesis of lymphatic system passes as process of recombination of arteries and veins and then lymphatic vessels, is manifestation of autodifferentiation of cardiovascular system when its parts enter into reinteraction including after their transformation.

The work was submitted to international scientific conference «Fundamental and applied research in medicine», France (Paris), 15-22 October, 2010, came to the editorial office on 12.08.2010.