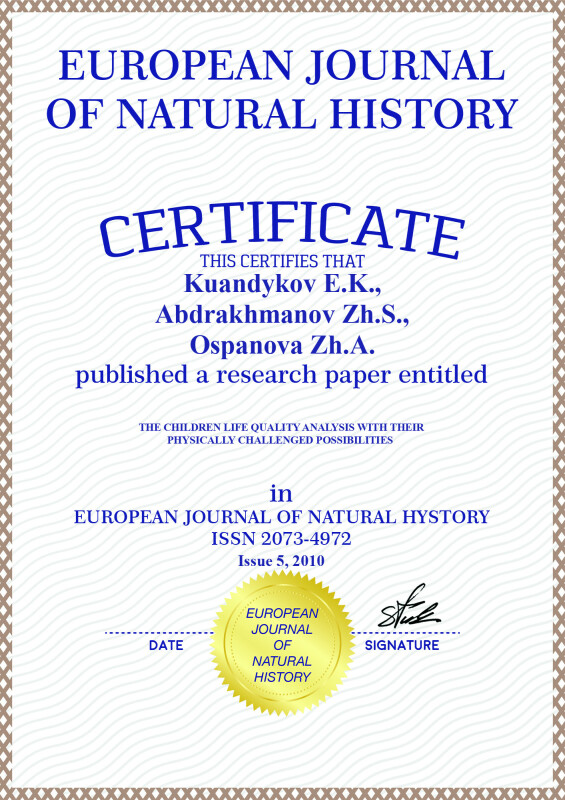 THE CHILDREN LIFE QUALITY ANALYSIS WITH THEIR PHYSICALLY CHALLENGED POSSIBILITIES

The Abstract. The children medical and social rehabilitation (MSR) global challenge with their physically challenged possibilities is the child normal life quality (LQ) preservation. So, it is much necessary the LQ index examination and the following study for the children rehabilitation arrangements more efficient conducing with their physically challenged possibilities. Thus, the life quality (LQ), by the WHO definition, - this is the physical, the psychological, the emotional, and the social functioning characteristic, having based on his subjective perception.

The children LQ indices dynamics examination and the study with their physically challenged possibilities, against the background of the MCR academic course passing by them, has been the study and the research target.

The Materials and the Methods. The 54 children with their physically challenged possibilities and their physical challenged capacities and their corresponding powers, having been specially registered, and, having passed the MCR academic course, which is being acted in the structure of «The Rehabilitation Center for the Physically Disabled Children» the STM of the Turkestan city of the South-Kazakhstan Region, have been thoroughly examined. The children LQ estimation at the age of 8-12 years has been carried out by the «PedsQL» special form, the version 4.0, having described the physical functioning (PF), the emotional functioning (EF), the social functioning (SF), and also the life at the school (LS).

Thus, according to the secondary school (SS) or the high school (HS) scale data, by the children themselves valuation, their LQ has already been improved with the time, against the background of the MCR academic course passing.

So, the medical and social rehabilitation (MSR) academic course is making positively its direct influence upon the under-aged children with their physically challenged possibilities the vital functions and the vital activity physical, the emotional, and the social sides, that is being revealed in all the scales indices further improvement, having characterized their LQ.

The paper has been presented for the «The Prospects For The Univrsity Science Development» All-Russian Scientific Conference, Sochi, September, 22-25, 2010. Came to the editorial office 28.06.2010.