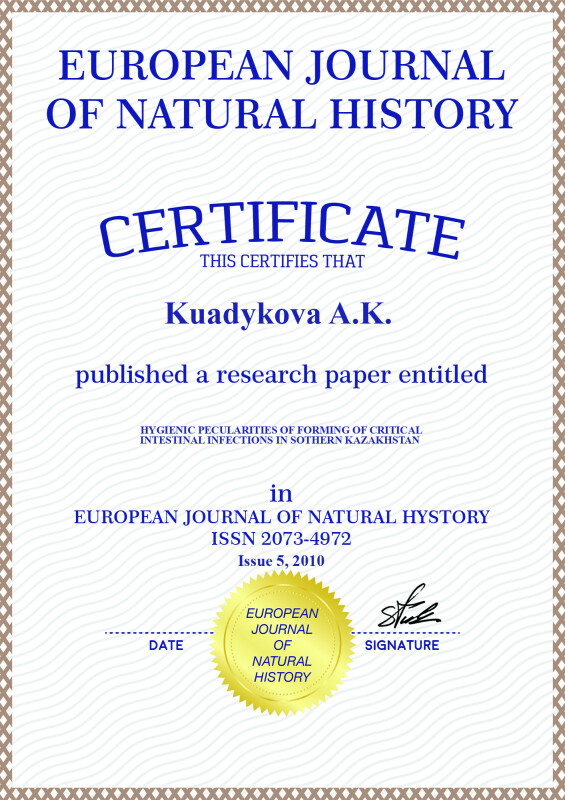 One of the serious medically-social problems of public health is high morbidity of critical intestinal infections (CII), which is registered in the majority of countries in the world. The aim of our research is the carrying out of analysis of dynamic of morbidity among the population of southern Kazakhstan of many years and single out the peculiarities of forming and conformities of revealing of epidemic process while critical intestinal infections.

During the period from 1985 to 2008 years the morbidity of CII at the territory of southern Kazakhstan is 380,74 to the 100 thousands of population. The dynamic of morbidity of CII was characterized by the growth from the middle of eighties, the pick of morbidity in 1989-1991 years with the second tendency to lowering. The most high showing was registered in 1990 (613,3 to the 100 000 of population) and reliably exceeded in 1,5 times the indicator by the republic.

There was stated the correlative dependence between some factors of environment and forming of high level of morbidity:

between the morbidity of population of CII and the quantity of inadequate tests of water by the bacteriological showings (r = 0,62, n = 19);

monthly morbidity of CII correlated with the quality of milk production by the bacteriological showings (r = 0,62, n = 19);

between the morbidity of children and teenagers of southern region of republic with sanitary-hygienic and technical level of infant and teenage objects (r = 0,51, n = 19);

between the morbidity of CII of all population with the condition of morbidity of organs of digestion (r = 0,72, n = 19);

between the morbidity of CII among the total population and with unsatisfactory technical condition of nutritional objects (r = 0,69, n = 19).

Received results of research will be used by us while the development and realization of preventive activities, including hygienic, medically-organizational, informatively-explanatory work and hygienic education of population. The introduction of the complex of preventive activities will allow to optimize the quality of environment and to promote the decrease of the morbidity of critical intestinal infections in the southern region of Kazakhstan.

The work was submitted to the scientific all-Russian conference "Perspectives of development of HEI´s science", Sochi, 22-25 of September, 2010. Came to the editorial office 14.06.2010.