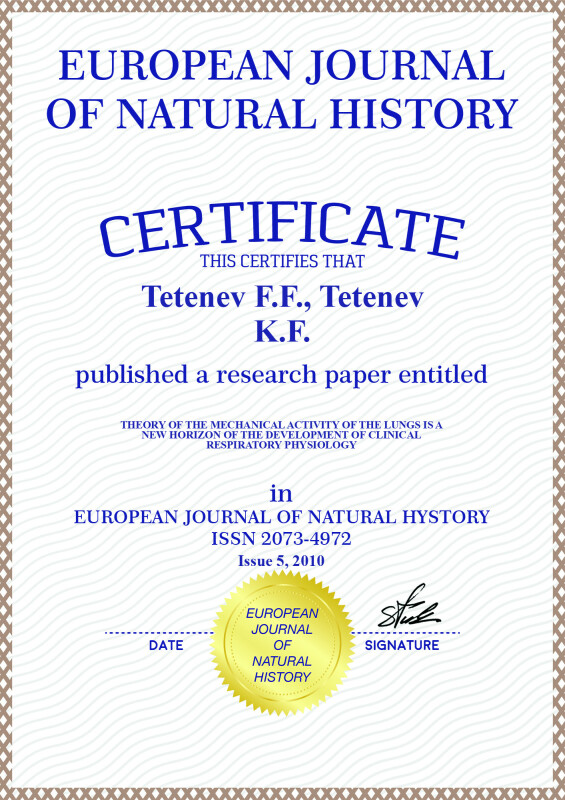 Article in PDF
202 KB
The paper deals with the main paradoxical facts, which are revealed in the investigation of respiratory mechanics in, practically, normal humans and patients with diseases of internal organs as well as in the experiment on animals. The investigation results are evaluated from the viewpoint of the requirements of the 1st thermodynamics law, which supports the fact that the lungs possess the property of independent mechanical activity.

Despite the considerable success of the methods of the functional diagnostics of the ventilation apparatus introduced into clinical practice, in clinical respiratory physiology there has clearly appeared a need to examine the most important theoretical points of respiratory mechanics in a new way. The conventional Donders theory considers the lungs to be a passive elastic organ whose respiratory movement is caused only by the activity of the respiratory muscles. The theory was developed in 1853, and since then it has been affecting the style of thinking in clinical respiratory physiology [1]. The above theory was sufficient for the solution of pragmatic tasks, so in the middle of the 20th century a complex of devices was developed intended for clinical diagnostics of disorders in the different pulmonary functions of the lungs. However, the results of the investigation into respiratory mechanics did not agree completely with the Donders theory. In the 70ies the researchers tried to explain the complicated manifestation of the mechanical properties of the lungs within the scope of the Donders theory [2]. Those attempts, however, were unsuccessful, which could be considered a sign of the crisis of the old paradigm and a reason for putting forward a theory of the mechanical activity of the lungs [3]. The new theory equipped with new methods of investigation has proposed some promising trends of the development of respiratory physiology, and so it has a real claim to play the role of a new paradigm [1, 4]. Since most researchers continue to study micromechanics and tissue mechanics within the scope of the old paradigm [5]. The purpose of this paper is to explain the most important complex problems using the new theory.

In the 50ies a safe method was developed to measure transpulmonary pressure (TPP) taking into account the difference in pressure in the esophagus and the mouth. Simultaneous recording of the TPP and the airflow allowed investigating respiratory mechanics [3]. Since then clinical respiratory physiology began to accumulate data on the elastance of the lungs of healthy humans, patients with various forms of pathology and animals in experiment. At the same time, the researchers started to find some phenomena that could not be interpreted in terms of the generally accepted knowledge. However, the old paradigm was so stable that they either considered the unusual phenomena artifacts or, as a rule, failed to notice them at all.

The most complicated issue was how to assess the state of the lung elastance. Under spontaneous breathing the lung compliance is determined by the relation of the respiratory volume to the TPP difference at the beginning and the end of inspiration. The above index, however, proved unstable: even in healthy individuals the lung compliance alters with changing speed of the airflow. With obstructive pulmonary emphysema it is lower, which implies a higher elastance. A decrease in the lung elastance in the case of emphysema is evident. The above paradox was accounted for by the fact that at the end of inspiration the alveolar pressure fails to level, so the dynamic component is added to the static elastic pressure. Due to that the lung compliance measured in such a way was referred to as dynamic. In order to eliminate the above component, it was suggested that the static elastic compliance be measured using the technique of interruption of the airflow for 0.5 s [6], although it was found to be both higher and lower than the dynamic one. Then the researchers stopped paying attention to such paradoxes and began to measure the lung elastance in quasistatic conditions at a slow deep inspiration in the linear part of the pressure-volume diagram [7]. The above method suited the obstructive theory of disorder in respiratory mechanics, whereas the question on assessing the lung elastance in spontaneous breathing remained unsolved.

According to the theory of the mechanical activity of the lungs, there is a source of mechanical energy in the lung structure. Its operation is related in a complex way to the work of the respiratory muscles both in healthy humans and patients. It can either decrease the work of the respiratory muscles to various extent or, on the contrary, increase it, which explains the absence of strict specificity in the indices of the respiratory mechanics in the diagnostics of higher or lower values of intrapulmonary resistance under pathology. Besides, this function explains the mechanism of appearance of some paradoxical phenomena.

Levelling of the pressure at the end of inspiration in healthy humans and patients occurs instantaneously. Therefore, changes in the dynamic compliance of the lungs with increasing airflow are caused by the changes in the lung elastance. With the obstructive disorders of the ventilation function during spontaneous breathing there occurs an active increase in the elastance to counteract the valve obstruction of the bronchus and ensure spontaneous respiratory mechanics [8]. Comparison of the values of the dynamic compliance of the lungs and their general compliance (the relation of the total lung capacity (TLC) to their maximal elastic recoil) allowed calculating the functional coefficient of the lung elastance [9]. The use of the technique of interruption of the airflow for 0.2 s allowed revealing the possibility to separately measure the operation of the intrapulmonary and extrapulmonary sources of the mechanical energy of spontaneous breathing [10, 11].

Webb et al. [12] were the first to describe predominance of the amplitude of the respiratory variations of the pressure in the wedged bronchus over that of the intrapleural pressure and show the photocopies of the pressure curves [12]. However, they attributed the above phenomenon to the effect of the perialveolar pressure, which contradicted the 1st fundamental thermodynamics law. A similar methodological mistake was made by the researchers that proposed a speculative theory on alveole interdependence, which explains the predominance of the negative pressure in the alveoles as compared to the intrapleural pressure [13, 14, 15]. Later Macklem P., who seemed to understand the unsteady theoretical position, put forward an idea of a promising possibility of search for the contracting elements in the lung structures [2].

Taking into account the universal character of the 1st thermodynamics law there is no need to look for additional proof to see that the predominance of the pressure amplitude in the brunchus over that inside the pleura is the manifestation of the regional mechanical activity of the lungs in the case the brunchus is wedged. The above phenomenon was supported by the experimental studies. It was found that it was definitely missing in the isolated lungs [16, 17], which means that the lungs show independent mechanical activity only in the living organism under conditions of integrity of the ventilation apparatus.

Explanation of the mechanism of the formation of the negative elastic hysteresis deserves special attention. The method of interrupting the airflow was suggested to ensure a more accurate division of the TPP into the static and dynamic components, which was an axiom in the Donders theory on respiratory mechanics. The distortion of TPP plateau during inspiration was mistakenly accounted for by levelling of the alveolar pressure exponentially. The plateau distortion toward the negative pressure during expiration was attributed to the collapse of the epiglottis, and a greater increase in the mouth pressure as compared to the imtrathoracic pressure was explained by the contraction of the mouth muscles [6]. However, the above explanations were not supported in further research [3].

The distortion of the TPP plateau during inspiration was studied clinically and experimentally on animals as well as in the isolated human and animal lungs [3, 17, 18]. At the interruption of the airflow during inspiration there appears a plateau in the spirogram. The TPP curve also shows a plateau whose position and shape, however, are not exactly what should be expected from the Donders theory. The intrathoracic pressure and the pressure in the mouth are joined on both sides of the membrane of the differential pressure sensor. When the airflow is interrupted the alveolar pressure instantaneously levels along with the pressure in the mouth. Since the negative value of the alveolar pressure is higher than that of the intrathoracic pressure, the sensor membrane is shifted towards the positive pressure. During expiration the alveolar pressure increases to a greater extent than the intrathoracic pressure. As a result, the TPP plateau is shifted towards the negative pressure. Besides, at the interruption of the airflow the sucking effect of the lungs during inspiration and contraction during expiration increase, with the plateau in the plot being distorted. During inspiration it looks like a spike directed toward the positive zone. Displacement and distortion of the TPP plateau reflect graphically the lung inspiratory and expiratory action. In the isolated human and animal lungs the above manifestations of the lung mechanical activity are not observed.

In studying the integral respiratory mechanics, in rare instances inversion of the general pulmonary hysteresis was observed in patients with obstructive pathology rather than with pneumonia and myopathy [4]. During investigation of the regional respiratory mechanics a general negative hysteresis was revealed much more often suggesting the regional mechanical activity of the lungs, which was clearly pronounced in the lung upper zones [19, 20].

Thus, the theory of the mechanical activity of the lungs allowed clarifying the numerous paradoxes, which earlier seemed unaccountable and, namely, 1) a decrease in the dynamic compliance of the lungs at emphysema when their elastic ability is low; 2) distortion of the transpulmonary pressure plateau at the interruption of the airflow; 3) negative elastic and general hysteresis of the lungs; 4) predominance of the amplitude of the respiratory variation of the alveolar pressure over that of the intrathoracic pressure; 5) the reason for nonspecificity of the conventional indices of the respiratory mechanics for diagnostics of the functional disorders of the ventilation apparatus in pathological states. It has allowed increasing knowledge of clinical respiratory physiology as well as determining promising trends of its further development, e.g. studying the morphology and the functions of the source of the lung mechanical energy, the development of the method of investigating the respiratory mechanics suitable for clinical practice.