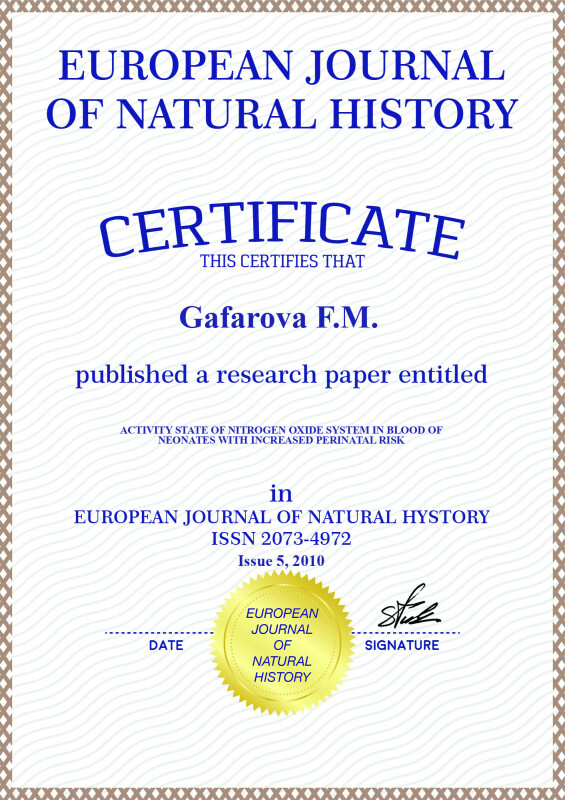 Evaluation of activity state of nitrogen oxide system in blood of neonates with increased perinatal risk was studied. An increase in NO production should be considered as compensatory-adaptive reaction aimed at preservation of microcirculation hemodynamics processes in organs and systems of neonates.

Degree of interrelation and interconditionality of disorders between NO level, activity of enzymes NOS, НР, О2- , ОNOO- and SOD formed a single pathogenetic mechanism of severity and progression of damage of vital important organs and systems and related features of clinical symptomatic in mature and immature neonates with PR.

One of the key places in discussion of therapy problems in modern neonatology takes search for an non-selective effect of therapeutic remedies on different regulation links of synthesis isoforms of nitrogen oxide (NOS) [14, 23]. It is caused by that hyperproduction of nitrogen oxide (NO) in the brain in response to hypoxia effect has selective character - it is increasing in structures of neuronal tissue preferable due to expression of neuronal NO-synthase (nNOS) and inducible one (iNOS) and decrease in content of endothelial NOS (еNOS) [9]. Immunohistochemistry investigations exhibited that an intensive expression of iNOS occurs not only in neurons themselves but also in astrocytes and microglial cells [24, 25]. An increase of production of induced iNOS-NO in cerebral cells provokes their damage and death [10]. At the same time, a decrease of production of endothelial NO also leads to vasoconstriction and, therefore, makes difficult passage of oxygen to the brain. Data available indicate that an effect of neurotropic therapeutic remedies in conditions of reduced activity of еNOS may result in no protection from hypoxia, in contrast, in reinforcement of damaged effect on the brain [2]. An effective neuroprotective effect is reached by selective inhibition of nNOS that has neurotoxic effect and stimulation of еNOS [3, 4]. It is considered that the main stimulus of iNOS expression is activation of free radicals´ processes that is related in hypoxia with activation of cytokins´ synthesis [8], as well as with inhibition of activity of antioxidants´ enzymes of superoxide dismutase (SOD) and glutathione peroxidase [5]. Free radicals, cytokins, tumor necrosis factor (TNFα), interferon gamma (iFN-γ), in their turn, activate transcription factor NF-kB that presents a key link of gene expression iNOS [6, 7]. The data available of possibility of an increase in content of NO in hypoxia irrespective of NO-synthase due to formation of NO from nitrates and nitrites during nitri-nitrat-reductases´ reactions [11] or during non-fermentative chemical transformations from ammonia [10, 11]. Hyperexcretion of NO may have a damaged effect on cells due to direct and intermittent mechanisms. But the most important mechanism of an intermittent damaged effect of excess of NO considers to be an interplay between NO and superoxide anion (О2-), formation of peroxinitrite (ONOO-) [7, 12].

Peroxinitrite easy permeates lipid bilayer of membrane, inhibites proteins of mitochondrial respiratory chain that leads to reduction in production of ATP (adenosine triphosphate) and damage of calcium homeostasis: they inhibite antioxidant enzymes and, therefore, reinforce formation of О2- [13]. Peroxinitrite is modified and breaks DNA, simultaneously inhibites DNA-synthase, and, therefore, contributes to process of an accelerated apoptosis and cellular necrosis [6, 8]. It is supposed that hyperproduction of NO, ONOO- has main contribution to development of damage of cerebral tissue, disturbance of cerebral hemodynamics, an increase of vascular permeability and edema of cerebral tissues [3, 4].

Deficit of information noted to be to present day in home literature about state of metabolism of endogen NO, formation of ONOO-, an activity level of systems responsible for О2- generation and its detoxification in organism of newborns in an early postnatal period. It remains unclear mechanisms in which result a role of molecule of NO changes from protective to damaged, data absence about interrelation of a level of production of NO, nitrit-nitrate-reductase and NADPH-oxidase reactions, activities of superoxide dismutase and their role in development and progression of perinatal risk in neonates (PR).

In this connection our work is aimed at evaluation of activity state of system of nitrogen oxide in blood of newborns with increased perinatal risk.

Cord and venous blood of 123 neonates with perinatal risk (PR) on the day 3 has been studied. The groups of neonates were divided in accordance with recommendations of Ju.I. Baryshev [1]. Forty eight newborns with low PR (1st gr.) including 25 mature and 23 immature into investigation were included. Into investigation were also included 40 newborns with increased PR (2nd gr.) including 20 mature and 20 immature as well as 35 neonates with high PR (3rd gr.) of them 18 mature and 17 immature.

The findings of cord and venous blood on day 3 received from 20 neonates with normal development and born from mothers with physiologic pregnancies and labors served as controls. Endogen level of NO by its general stable metabolites (NO2- и NO3-) by using of Griss reagent [20], activity of eNOS - by changes in NO production from L-arginine (10 mkg/ml) in presence of NADPH [15], activity of NADPH-dependent nitrate reductase (NR) [22], level of ONOO- - by velocity of hydroxidation [21] in whole blood were determined. Velocity of generation of О2- was determined by quantity of inhibited SOD in restoration of cytochrome С [18], and activity of SOD was estimated by inhibition grade of restoration of nitro-blue tetrazol in presence of phenosine metasulfate [19].

Statistical treatment of the findings was made by means of the licenced program package Statistica (version 5.1. Stat Soft). Reliability of differences between comparing indices was determined by criterion of Student in case of a normal distribution and homogeneous dispersiveness and criterion of Mann-Witney, its analogue, for non-parametric distributions. Correlation was established by Pearson. Differences were considered reliable in Р<0.05.

Studies carried out exhibited substantial differences in the studying indices in cord and venous blood of neonates in control group. Activities of еNOS and NO in venous blood were higher, and activity of NR, content of ONOO- and velocity of generation О2- - were reliably lower than indices in cord blood of newborns (Table). Difference in NO-system is likely to determine the further compensatory-adaptive reactions to environmental changes and nutrition, because cord blood of neonates reflects state of feto-placental complex and intrauterine development of fetus. Venous blood reflects functional-metabolic state of newborn. Metabolic activity and blood supply of vital important organs and systems in an early postnatal period of neonates in the future depends upon an initial level of NO-system.

Thus, results of studies obtained showed that in cord and venous blood of both mature and immature newborns depending on PR grade were increasing disorders in NO-system. An increase in NO level how follows from data obtained occurs due to activation of NR reaction that contributes to preservation of state of cellular membranes on stable level [11]. At the same time, an increase in NR activity and a level in cord and venous blood in mature and immature neonates with PR NO we consider as its adaptive reaction to decrease in functional activity of enzyme еNOS. In conditions of prolonged hypoxic state occurs NO production from precursor of L-arginine, because this reaction with participation of еNOS may occur in presence of sufficient quantity of oxygen [5, 9] and a more ancient mechanism was activated - cycle of nitrogen oxide with involvement of nitrite nitrate reductases´ enzymes that transform NO2- and NO3- into NO 100-1000 times more than its formation with articip of enzyme NOS [11]. In conditions of hypoxia a process of О2- [6,8] formation was stimulated which restraining factor is SOD activation [9, 10]. The increase in SOD activity in mature and immature neonates with the 1st and 2nd PR grade is likely to be adequate to this process aimed at defense and maintenance of membranes´ stability, metabolic systems in organism tissues from oxidative destruction of О2- or singlet oxygen (˙О2-) [26]. At the same time, a high level of О2- may be one of the important factors of inhibition and modification of membrane-dependent enzymatic systems including SOD [12, 13] as consequence of spontaneous activation of free-radicals´ reactions and processes of lipid peroxidation [10]. In this connection it may be considered that reduction in SOD activity in mature with the 3rd grade and immature neonates with the 2nd and 3rd grade of PR in cord and venous blood is related with hyperexpression of О2- as well as formation of high reactive cytotoxic compound ONOO-. Taking into consideration an importance of disorders revealed by us a scheme of possible mechanisms of formation in PR neonates with involvement of NO-system.

It is given from the figure presented that inhibition of eNOS in cord and venous blood and development of endothelial dysfunction (ED) are important factors in formation of clinical manifestations in neonates with PR. This, in its turn, leads to generalized disorders in microcirculation and hemodynamics processes in a system mother-fetus, and, as consequence, to hypoxia of newborn [16, 27].

As response to hypoxia a cycle NO with involvement of NR enzyme and NADPH-oxidase was activated [17]. Content of NO and О2- in cord and venous blood were increasing that served important factors of stimulating reaction of their interplay with formatting stable, cytotoxic compound ONOO- prolonged preserving in tissues. Together with ONOO- and О2- these compounds have toxic effect on organs´ and systems´ tissues. Toxic effect of О2- and, it may be supposed, ONOO-, is determined by tension of enzyme of antioxidant system SOD.

Thus, studies carried out showed that an increase in NO production should be considered as compensatory-adaptive reaction aimed at preservation of microcirculation hemodynamics processes in organs and systems of neonates that was demonstrated in cord and venous blood of neonates born from mothers with normal physiologic pregnancy and delivery. NO level in control was increasing due to increasing of еNOS activity. But in conditions of hypoxia, development of intra- and perinatal pathology the cytoprotective effect by growing NO concentration in cord and venous blood was giving place to cytotoxic effect. In this mechanism an important role plays hyperexpression of НР, О2-, as well as ОNOО-. SOD activity incompensated to this process contributed to increasing level of О2-. Degree of interconnection and interconditionality between NO level and activity of enzymes еNOS, НР, О2-, ОNOO- and SOD formed a single pathogenetic mechanism of severity and progression of damage of vital important organs and systems and related features of clinical symptomatic in mature and immature neonates with PR.

2. Progression of PR grade in mature and immature neonates was associated with growth dynamic in a level NR activity in cord and venous blood, velocity of О2- formation, concentration of peroxinitrite (ОNOO-) and NO.

3. Disorders in NO-system activities in cord and venous blood are important pathogenetic factors of formation and progression of pathologic process in mature and immature neonates with PR.